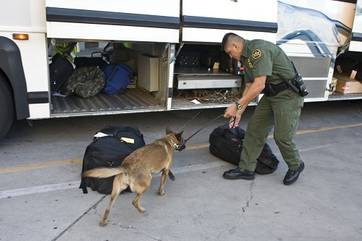 A $198,000 award to PetPace LLC to assess their product’s ability to provide real-time health monitoring of Customs and Border Protection’s (CBP) canines was awarded by the Department of Homeland Security (DHS) Science and Technology Directorate (S&T) under the Silicon Valley Innovation Program (SVIP) Other Transaction Solicitation (OTS), which are designed non-traditional performers to offer solutions to some of the toughest threats facing DHS and the homeland security mission.

This is the first award under the K9 Wearables Solicitation, one of five active calls under the SVIP.

“CBP has one of the largest and most diverse canine programs in the country with more than 1,500 canine teams trained in disciplines such as searchand rescue and firearms and currency detection,” said CBP Acting Commissioner Kevin McAleenan. “Our canines are vital partners in achieving CBP’s mission and often operate in intense climates with serious physical demands. This program provides an opportunity to gather new data in the training environment which could translate to improved animal performance and care in the field.”

“Canine teams are the silent heroes of homeland defense,” said Acting DHS Under Secretary for Science and Technology Dr. Robert Griffin. “I am pleased S&T can identify and leverage some of the cutting edge technologies in the field with the potential to improve the training and welfare of the Department’s working dogs.”

The SVIP K9 Wearable Technologies Call aims to use personalized, real-time data gathered from canines via wearable devices. DHS said it “intends to evaluate this data in order to derive new insights that could improve animal health and performance.”

The project is comprised of technical topic areas to include: Recording and Transmitting Canine Vital Signs; Receiving, Storing and Analyzing Vital Sign Data, and Maintaining and Updating Canine Sensor Components.

PetPace will demonstrate how existing technology to track vital signs and physiological data can be operationalized for CBP canine teams. Project milestones include independent laboratory test and evaluation and in-theater demonstrations.

“CBP K9s have a critical role in CBP’s mission of securing the border. At US ports of entry and Preclearance locations abroad, CBP officers utilize specially trained canines for interdiction and in support of specialized programs aimed at combating terrorism, as well as countering narcotics, firearms, human and undeclared currency smuggling,” DHS said. “In between ports of entry, the Border Patrol uses canines to detect undocumented aliens and illegal drugs at checkpoints and along our borders."

For more information on this and other SVIP solicitations visit http://scitech.dhs.gov/hsip or contact dhs-silicon-valley@hq.dhs.gov.