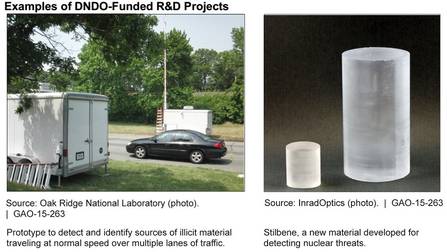 The Department of Homeland Security’s (DHS) Domestic Nuclear Detection Office (DNDO) needs to document how its research investments align with its research challenges and gaps in the Global Nuclear Detection Architecture (GNDA), a US government framework to detect and interdict nuclear smuggling, according to a 42-page Government Accountability Office (GAO) audit report.

In addition, GAO recommended that DNDO needs to “take a systematic approach for evaluating the extent to which outcomes of its R&D investments collectively contribute to addressing its research challenges.”

“Because of limitations in DNDO’s documentation, it is unclear to what extent DNDO’s process for planning and selecting R&D projects to fund aligns these investments with gaps in the GNDA,” GAO stated in its audit report, DHS Research and Development on Radiation Detection Technology Could Be Strengthened.

Requested by Rep. Michael McCaul (R-Texas), chairman of the House Committee on Homeland Security and ranking committee member Rep. Bennie G. Thompson (D-Miss), GAO’s audit report disclosed that although DNDO officials said they “developed high-level goals—known as research challenges—to align with gaps in the GNDA and guide R&D investment planning,” and that “officials said they regularly discuss how ongoing R&D projects align with these research challenges and gaps in the GNDA,” DNDO doesn’t document this alignment consistent with federal standards for internal control.”

And, “Without such documentation, it is unclear to what extent DNDO’s investments are positioned to address gaps in the GNDA,” GAO concluded.

During fiscal years 2008 through 2013, DNDO started 189 research and development projects that it grouped into various scientific or technological focus areas, known as portfolios, GAO explained, saying, “These projects are intended to address gaps in the GNDA.”

As of September 2014, DNDO had obligated approximately $350 million to these projects. For example, DNDO’s shielded detection portfolio, which investigates methods for detecting shielded nuclear material, had the most projects start during this time—48 projects—and received the most obligations—approximately $103 million, or about 30 percent of obligations.

“DNDO has taken some steps to evaluate the outcomes of individual R&D projects, which may demonstrate the success of specific technologies, but it does not have a systematic approach for evaluating how the outcomes of projects may collectively contribute to addressing its overall research challenges,” GAO said. “Under federal standards for internal control, managers are to compare actual program performance to expected results and analyze significant differences. Such analysis can help managers identify program problems, if any, and make improvements.”

“Without a systematic approach for evaluating the results of its investments in R&D projects more broadly, DNDO cannot demonstrate the extent to which its investments contribute to addressing its overall research challenges,” GAO determined.

And, “Preventing terrorists from smuggling nuclear or radiological material to carry out an attack in the United States is a top national priority,” GAO stated, adding, “DNDO’s mission is to improve capabilities to deter, detect, respond to and attribute responsibility for nuclear terrorist attacks, in coordination with domestic and international partners. As part of this mission, DNDO conducts R&D on radiation and nuclear detection devices.”

This week, the about 200 California National Guard, civilian law enforcement and firefighting personnel will be involved in a coordinated interagency response at the Richmond, California Fire Training Center to the discovery of a "dirty bomb.”

GAO’s review DNDO’s management of its R&D program provides information on the types of R&D projects DNDO started in fiscal years 2008 through 2013; examined the extent to which DNDO’s process for planning and selecting R&D projects to fund aligns its investments with gaps in the GNDA; and examined the steps DNDO takes to evaluate the outcomes of R&D projects in which it invests.

To carry out its audit, GAO “analyzed DNDO program documentation and R&D project data for projects starting in fiscal years 2008 through 2013, and interviewed DNDO and other DHS component officials, among other actions.”