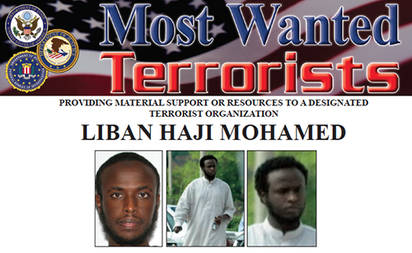 Last week the FBI added a 29-year old former taxi driver from the Northern Virginia suburbs of Washington DC to its list of Most-Wanted terrorists for being a recruiter for the Somali-based Al Shabaab terrorist group linked to Al Qaeda.

Liban Haji Mohamed, a naturalized US citizen born in Somalia, was charged with providing material support and resources to Al Shabaab and Al Qaeda. An arrest warrant, originally issued in February 2014, was unsealed last week in US District Court in Alexandria, Virginia.

“Al Shabaab has claimed responsibility for many bombings in Somalia and Uganda and the 2013 attack on the Westgate Mall in Nairobi, Kenya,” said Carl Ghattas, special agent in charge of the Counterterrorism Division at the FBI’s Washington Field Office. “Liban Mohamed is believed to have left the US with the intent to join Al Shabaab in East Africa. We believe he is currently there operating on behalf of that terrorist organization.”

The FBI believes Mohamed left the country in the summer of 2012 using a US passport and is a close associate of convicted terrorist Zachary Chesser, who was sentenced in 2011 to 25 years in prison for attempting to provide material support to Al Shabaab.

INTERPOL has been looking for Mohammed ever since he left the United States. In August 2014, the international police organization issued a red notice seeking Mohammed as a wanted fugitive.

The FBI is offering a reward of up to $50,000 for information leading to Mohamed’s arrest and conviction. To encourage people to come forward with information, the FBI is publicizing the case on social media channels in Somalia and elsewhere.

"It is important for us to locate Mohamed because he has knowledge of the Washington, DC area’s infrastructure such as shopping areas, Metro, airports, and government buildings,” Ghattas explained. “This makes him an asset to his terrorist associates who might plot attacks on US soil.”

The FBI said Mohamed may go by multiple alias including Abu Ayrow, Shirwa, Shirwac, Qatiluhum, and Qatil; that he speaks Somali, English and Arabic; and that he stands 6 feet tall and weighs just under 200 pounds.

The FBI is encouraging anyone with information about Liban Haji Mohamed to contact the FBI or the nearest American Embassy or Consulate. Tips can be submitted anonymously online.

Liban Mohamed is the brother of Gulet Mohamed, a Somali-American who for a number of years has been contesting the constitutionality of his inclusion on the No Fly List—a list maintained by the FBI’s Terrorist Screening Center of people who are not permitted to board a commercial aircraft for travel in or out of the United States.

In a hearing held one day after the FBI put Gulet Mohamed’s older brother on its list of most wanted terrorists, Federal Judge Anthony Trenga of the Eastern District of Virginia aggressively questioned the executive branch’s authority to operate a program that may result in the deprivation of basic liberties.

Gulet Mohamed — a resident of Alexandria, Virginia and a naturalized US citizen — filed a complaint several years ago contesting his inclusion on the No Fly List after he was prevented from returning to the US from Kuwait in 2011.

A court filing indicates he was allegedly detained by Kuwaiti officials for a week and tortured. He discovered his inclusion on the No Fly List after Kuwaiti officals tried twice to deport him.

Mohamed was allowed to return home after filing a federal lawsuit, but has is challenging his continued inclusion on the list. He claims he was visited by FBI officials on two occasion while he was in the deportation facility.

The US government is currently in the midst of revising rules for placement on the No-Fly list. Homeland Security Today reported in July that Judge Anna Brown of the US District Court for the District of Oregon ordered in favor of the 13 plaintiffs in a lawsuit contending there are no meaningful procedures in place to contest inclusion on the No Fly List.

In cooperation with the court’s order, the Department of Justice announced plans to develop new methods that protect the due process rights of American citizens without jeopardizing national security.

"We would question the timing of the FBI’s placement of Liban on the most-wanted list on the day before a major hearing on the government’s authority to maintain the no-fly list," Abbas said in a telephone interview with the Associated Press.