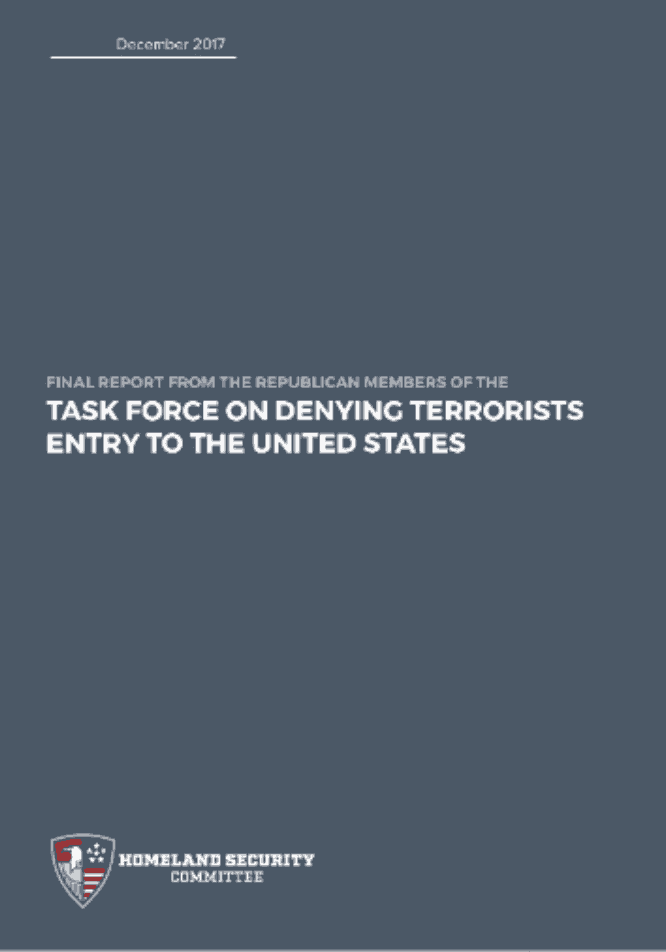 The Homeland Security Committee’s Republican Members of the Task Force on Denying Terrorists Entry to the United States released its final report after conducting an extensive review to assess key pathways extremists might utilize to infiltrate the homeland. The Task Force was also charged with identifying gaps in U.S. government information sharing and vetting procedures. The report highlights seven recommendations to strengthen our defenses against terrorists attempting to enter the homeland.

Chairman McCaul: “Many foreign fighters have returned to their home countries in the West and elsewhere over the years from ISIS’ so called caliphate. They are well trained, have battlefield experience, and the jihadi connections needed to carry out terrorist attacks. This is a direct threat to Europe and the homeland as well. Therefore, at the beginning of this year, I established the Task Force on Denying Terrorists Entry into the United States, and charged it with examining the threat of foreign fighters and how terrorists might infiltrate the homeland.

Task Force Chairman Mike Gallagher: “The conflict in Iraq and Syria led to one of the largest mobilizations of foreign fighters in history. Since many of these fighters came from Europe and North America, the defeat of the caliphate increases the risk that terrorists will seek to return home to carry out attacks. That is why the Task Force was intent on examining how we can best protect the homeland against terrorist entry.

While the U.S. and our foreign partners have made great strides in the fight against terrorism, there is still more work to be done. A major theme that the Task Force heard repeatedly is the need for increased information sharing, not only with our allies but also among federal agencies, so that critical security information can get into the hands of frontline screeners.

I want to thank Chairman McCaul and Rep. Katko for their support; and I especially want to thank my Task Force Members for their input and participation. I look forward to working with my colleagues on both sides of the aisle to ensure that these recommendations are swiftly enacted into law.”

Though much progress has been made since 9/11, Congress and the Executive Branch must continue to work together to provide the resources and direction needed to overcome the bureaucratic, legal, capacity and technical challenges that hinder U.S. information sharing and related efforts.
Given the growth in the screening and vetting bureaucracy since 9/11, a review should be conducted to ensure all the entities involved are executing their responsibilities and there is no unnecessary duplication or stove-piping that limits information sharing.
DHS should continue to expand ICE’s Visa Security Program, which helps facilitate the investigation and enhanced screening of visa applicants at high-risk consular posts abroad.
DHS and the State Department should expand the use of information found on social media to screen and vet foreign nationals, and should work with Congress to ensure they have the resources needed to better integrate social media information into their screening and vetting processes.
Merging the functions of the Terrorist Screening Center into DHS’s National Targeting Center should be considered, especially since the TSC’s role as an information sharing facilitator directly aligns with DHS’ core missions and DHS is the largest consumer of the TSC’s watchlist.
A review should be conducted to ensure each foreign national is receiving the appropriate level of scrutiny prior to being admitted to the country and DHS should build on current initiatives to continuously screen foreign nationals, in a risk based manner, to identify individuals who may potentially pose a threat after entering the homeland.
DHS should continue to utilize the existing legal requirements of the program, especially those established by the Visa Waiver Program Improvement and Terrorist Travel Prevention Act (P.L. 114-113), to encourage and foster closer security cooperation with our Visa Waiver Program partners.