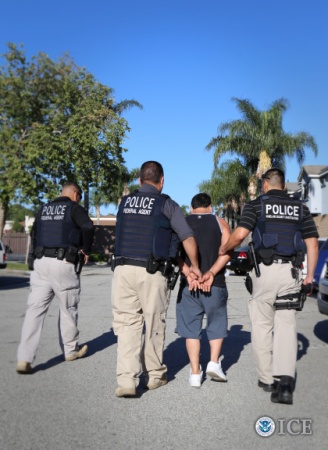 On the heels of Immigrations and Customs Enforcement (ICE) Homeland Security Investigations (HSI) having successfully taken down adult child sex predators and 2,059 convicted criminal aliens subject to removal during a five-day operation which raised questions about the administration’s immigration enforcement policies, nearly 1,000 gang members and associates from 239 different gangs w

The operation was part of HSI’s Operation Community Shield, a global initiative in which HSI collaborates with federal, state and local law enforcement partners to combat the growth and proliferation of transnational criminal street gangs, prison gangs and outlaw motorcycle gangs in the United States and abroad.

“Through its domestic and international Operation Community Shield task forces, HSI leverages its worldwide presence and expansive statutory and civil enforcement authorities to mitigate the threats posted by these global networks, often through the tracing and seizing of cash, weapons and other illicit proceeds,” ICE said in an announcement about the operation.

ICE said, “Most of the individuals arrested during Project Wildfirewere US citizens, but 199 foreign nationals were also arrested from 18 countries in South and Central America, Asia, Africa, Europe and the Caribbean.”

Of the individuals arrested, 976 were gang members and associates,” ICE said, noting that, “HSI agents also arrested – or assisted in the arrest – of 231 other individuals on federal and/or state criminal violations and administrative immigration violations, for a total of 1,207 arrests. Of the total 1,207 arrested, 1,057 were males and 150 were females.

Of the 976 gang members or associates arrested, 913 were charged with criminal offenses and 63 were arrested administratively for immigration violations; 650 had violent criminal histories, including 19 individuals wanted on active warrants for murder and 15 for rape or sexual assault; and 199 were foreign nationals, of which 151 were gang members and gang associates.

“Criminal gangs inflict violence and fear upon our communities, and without the attention of law enforcement, these groups can spread like a cancer,” said ICE Director Sarah R. Saldaña. “That’s why ICE works with law enforcement partners around the country to stamp out gang activity wherever it takes place.”

The majority of the individuals arrested were affiliated with the Sureños, Norteños, Bloods, Crips, Puerto Rican-based gangs and several prison-based gangs.

HSI special agents seized 82 firearms, 5.2 kilograms of methamphetamine, 7.8 kilograms of marijuana, 5.6 kilograms of cocaine, 1.5 kilograms of heroin, $379,399 in US currency, counterfeit merchandise with a manufactures suggested retail price of $547,534 and five vehicles.

Since the inception of Operation Community Shield in February 2005, HSI special agents working in conjunction with federal, state and local law enforcement agencies have arrested more than 36,000 street gang members and associates linked to more than 2,600 different gangs, ICE said, adding, “At least 46 percent of those arrested had a violent criminal history. More than 490 of those arrested were gang leaders, and more than 4,700 were MS-13 gang members or associates. Through this initiative, HSI has seized more than 6,600 firearms nationally.

The National Gang Unit oversees HSI’s expansive transnational gang portfolio and enables special agents to bring the fight to thesecriminal enterprises through the development of uniform enforcement and intelligence-sharing strategies.