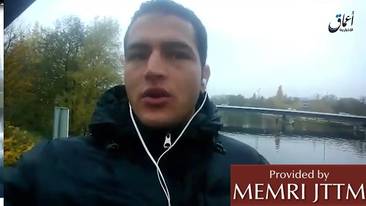 A short video featuring Anis Amri, the Tunisian national who rammed a truck into a Christmas market in Berlin, killing 12 people and wounding dozens, was released today by  A’maq, the news agency of the Islamic State (ISIS) showing Amri “swearing fealty to ISIS and urging ‘monotheists’ all over the world and in Europe to immigrate to the Islamic State and also to carry out attacks where they are located,” the Middle East Media Research Institute’s (MEMRI) Jihad and Terrorism Threat Monitor (JTTM) revealed.

Two weeks before 31-year-old Tunisian Muslim emigre Mohamed Lahouaiej Bouhlel massacred at least 84 people when he drove a rented 19-ton Renault truck for more than a mile along a Nice, France beachfront roadway filled with Bastille Day celebration crowds, a video was released using a Telegram channel managed by French ISIS fighters, likely in Mosul, in which an ISIS fighter called for French jihadiststo use large trucks to carry out mass killings of “infidels.”

In the Inspire Guide, AQAP made clear it urged jihadists to use trucks to slaughter as many people as Bouhlel obviously intended to do.

In the video ISIS released today, “Amri appeared wearing a sweater and recording a video of himself reciting the vow of fealty to the Caliph of the Islamic State, Abu Bakr Al Baghdadi, noting that he will always obey the orders regardless of whether he is at ease or in hardship, and that he will implement the religion of Allah and fight Allah’s enemies,” MEMRI said.

Amri, who was killed earlier today in a shootout with police in Milan, Italy, addressed the "crusaders,” describing them as "pigs.”

He added, "By the name of Allah, we have come to slaughter you. You bombard Muslims. The monotheists have a nation behind them and their blood will never be in vain. Allah permitting, their blood will not be in vain. We are a nation behind them, and we will [seek] vengeance for them. Allah permitting, you will drink from the same glass [from which we have drunk] and you will taste our might. Our glass is bitter and our might is vigorous."

Calling on "monotheists" all over the world to immigrate to the Islamic State or to carry out attacks where they are located, Amri said, "Oh brothers, immigrate and wage jihad for the sake of Allah, support this religion. Everyone should do what he can. Every person should support the religion with whatever he can. Those who are able to immigrate should immigrate; those who can carry out local attacks should do so, and those who are in Europe should fight those pigs crusaders."

MEMRI said, “Amri concluded with a prayer to Allah to help him kill ‘the infidels’ and asked Him to bring down their airplanes, to sink their ships, and to allow Muslims to seize their military assets.”