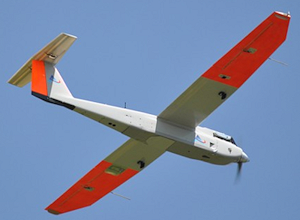 The flight operations took place on March 4 and 6.

Bob Alger, director of business development for SRC, Inc., said the equipment could be used, for example, at a package delivery hub, where many UAS … are entering the same area.

“SRC looks forward to supporting LSUASC test ranges with state-of-the-art sense-and-avoid technology. Our ground sensors and algorithms provide the foundation for research and development needed to allow safe integration of UAS into the national airspace system,” Alger said in a statement. “SRC’s expertise is in leveraging our radar technology and software algorithm advancements for the detection and tracking of small and slow UAS.”

SRC, based in Syracuse, NY, came to South Texas to demonstrate the capabilities of the technology, described as the sense part of a sense-and-avoid system, one of the critical building blocks for safe UAS operations.

The ground based sense-and-avoid radar provided the ability to determine whether non-test aircraft or birds had entered the UAS area of test operation. The exercise included working closely with area stakeholders, including aircraft operating in and around the airport, the Navy, the US Coast Guard, Customs and Border Protection and LSUASC personnel working closely with Federal Aviation Administration (FAA) Air Traffic Control operators.

The missions took place at altitudes up to 3,000 feet and over a distance of 18 miles.

The RS-16 is the University’s largest UAV, with a wingspan of nearly 13 feet and a maximum weight of 85 pounds. It launches with a pneumatic catapult and lands on its belly.

Sense-and-avoid technology is critical for UAS flying out of sight of operators who program and control the aircraft from locations on the ground. Current federal regulations are evolving for beyond-sight operations and the LSUASC is prepared to assist the FAA in clearly defining the safe rules, regulations and procedures for that type of operation.

One of the goals of this week’s mission was to test the effectiveness of a helicopter as a chase vehicle. Previous test flights used a small piloted-plane that overheated while tracking the much slower RS-16.

“We were able to conduct three good flights this week, allowing us to test and refine our capabilities with the RS-16,” said Dr. David Bridges, associate professor of mechanical engineering and director of the University’s UAS program. “It is also our first time to fly with an FAA registration number that identifies our craft just like all manned aircraft.”

Since 2011, the University has conducted regular flights of its RS-16.

Dr. Luis Cifuentes, interim executive director of the LSUASC and the university’s vice president for research, commercialization and outreach, said the test establishes the foundation of data-gathering to validate beyond-line-of-sight operational procedures for small and large UAS that will soon operate in the national airspace at many altitudes.

Jerry Hendrix, LSUASC chief engineer, added this was the first of many tests and collaborations to assist in defining the architecture needed to operate with different sense-and-avoid technologies.

The LSUASC is conducting monthly research flights and is releasing information requests for UAS acquisition and for companies interested in testing their equipment, payloads or aircraft.  The LSUASC has a backlog of interested companies, but the ranges of Texas can accommodate many different operations at the same time.

“Texas A&M University-Corpus Christi and the Lone Star UAS Center are excited to be at the forefront of testing technologies needed to fully integrate unmanned aircraft into our national airspace,” Cifuentes said. “The safety of our skies is paramount. The Lone Star Center will continue testing aircraft, systems and software to assist the Federal Aviation Administration as it develops rules and procedures required to ensure safety in the national airspace.”

Officials of the university UAS proram said, “Collecting this kind of aerial imagery is vital to research, business and safety, including:

LSUASC is one of six federally-designated test sites for unmanned aircraft, and will report the results of its tests to the FAA. The tests were designed to safely integrate UAS into the national airspace, including air traffic control and communications, developing protocols for dealing with runways in use by piloted craft and ensuring air traffic control communications between the UAS and Mission Control Center.

While the test site designation does not involve federal funding, studies indicate an economic impact of about $6.5 billion and 8,256 jobs statewide in the decade following full integration of UAS into the national airspace system.