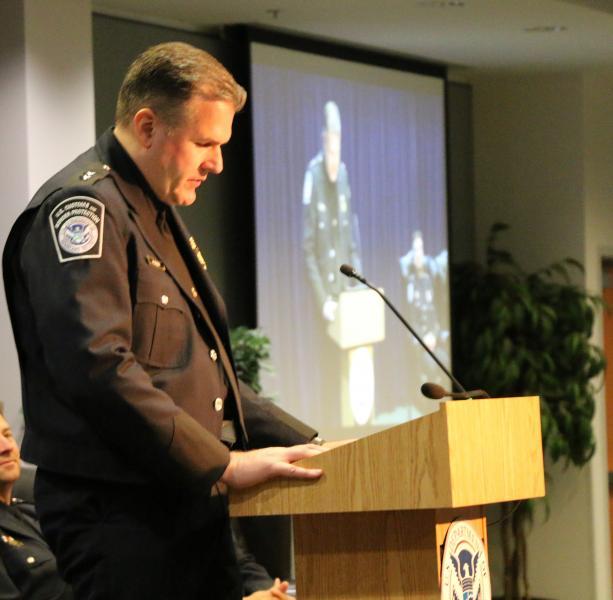 “Mr. Kusser will oversee some of the great innovations efforts we are taking in this agency from biometric technology to data analytics, but most importantly he’ll be the leader of a resilient workforce, and the public is counting in our resiliency to keep them safe and keep the economy moving,” said John P. Wagner, CBP Deputy Executive Assistant Commissioner, Office of Field Operations.

“CBP senior leadership recognizes that a port the size of LAX, must be managed with precision and integrity and that it is essential that a Port Director undertaking command of this operation exercise sound judgment, be experienced, compassionate, personable and committed to the mission of CBP and its people. I very pleased with the selection of Mr. Kusser to assume such a critical position,” said Carlos C. Martel CBP Director of Field Operations in Los Angeles.

Held at Los Angeles Air Force Base in El Segundo, the ceremony steeped in CBP tradition, features de transferal of the CBP guidon from the Deputy Executive Assistant Commissioner to the Port Director to symbolize the conveyance and assumption of command.

“I am extremely proud of the amazing work the dedicated men and women of CBP do every day to safeguard our nation and I am honored to serve as the Area Port Director, said Mr. Kusser as he addressed CBP senior leadership, employees, law enforcement partners and stakeholders.

After JFK, LAX ranks second in the nation in terms of international travelers. In Fiscal Year 2018, CBP officers processed 12.4 million international travelers at LAX. In the same period, CBP officers at LAX intercepted 273 criminals, felons and fugitives and seized $1.5 million in unreported cash and currency intercepted going inbound and outbound.

In his prior capacity, Mr Kusser served as Assistant Port Director, Tactical Operations, at our Nation’s largest seaport in Los Angeles/Long Beach, California.  He oversaw CBP’s enforcement operations related to the processing of more than 4.9 million cargo containers annually, which equates to nearly 40 percent of our Nation’s total sea cargo, in addition to processing 1.4 million passengers and crew annually.

In this role, Mr. Kusser excelled at establishing stakeholder partnerships and augmented CBP’s services to the industry through the enrollment of numerous terminal and warehouse operators in the Reimbursable Services Program.

He led efforts to enhance operational efficiencies through the implementation of the remote Radiation Portal Monitoring program.  Additionally, Mr. Kusser led the creation of an intelligence-driven Special Enforcement Group aimed at identifying and disrupting transnational criminal organizations at the seaport.

From 2011 to 2016, Mr. Kusser served as the Assistant Port Director, Passenger Operations, LAX, where he oversaw passenger screening and enforcement units and established an enforcement posture that resulted in a 77 percent increase in the interdiction of inadmissible passengers, and enhanced CBP’s ability to respond to active shooter events through establishment of LAX’s Tactical Enforcement Officer program.

Mr. Kusser began his Federal career with the U.S. Customs Service in 1991, as a cooperative education student in Los Angeles, California, and served as a Customs Inspector in San Ysidro until 1999. He holds a Bachelor’s of Science degree from Northeastern University and he is a graduate of the Harvard University, John F. Kennedy School of Government, Senior Executive Fellows program.