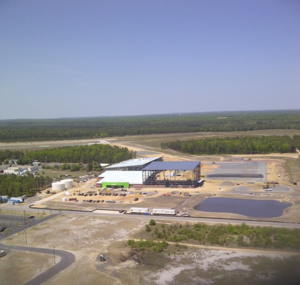 In the skies somewhere above the Middle East, several Blackhawk helicopters hover. Their doors open and American service members exit and swiftly descend by rope to the ground. They move in on high value targets of interest and confiscate their weapons, ammunition and intel.

What helped to make this mission a success was the fast rope system installed on the Blackhawks by the Flight Activity Center that is part of the Communications Electronics Research, Development and Engineering Center (CERDEC) in Lakehurst, New Jersey.

In order for the center to continue to create these much needed technologies, they realized they had to upgrade their facilities to match the challenges being presented during their missions. As a result, the US Army Corps of Engineers, New York District is constructing a new energy-efficient multi-purpose complex that will help the center to continue their important mission while at the same time save the base and taxpayers considerable money.

The center is at the forefront of aviation technology. Its goal is to keep our Soldiers and members of other Department of Defense (DoD) related agencies safe in the sky. The center provides end-to-end aviation support in partnership with the DoD agencies, members of industry and academia.

They research, test and evaluate technologies that enable pilots to promptly receive information while in flight and react appropriately.

Technologies include various infrared counter measures, signals intelligence sensor systems and radar systems. In addition, the center performs post-production aircraft modifications, like the fast rope system that was installed on the Blackhawks. Flight tests are performed by their team of combat experienced pilots.

A few years ago, the center realized that in order to continue to successfully perform their mission they had to upgrade their center that was degrading. Their pre-WWII building was not safe for workers, was energy in-efficient and was costly to maintain.

The center is located on the Joint Base McGuire-Dix-Lakehurst. The Army Corps has successfully performed several other projects on the base and was called upon to do this project.

Paul Jalowski, project manager, New York District, US Army Corps of Engineers, said, "What makes this complex unique is that it will be using energy saving measures that will certify the complex as LEED Silver or Leadership in Energy and Environmental Design Silver."

One of the energy saving methods the project is using is geothermal energy. Naturally occurring heat from deep within the ground near the complex is going to be harnessed and used to heat and cool the entire structure.

"This will reduce the complex’s energy consumption by approximately 44 percent and save the base and taxpayers approximately $150,000 annually," Jalowski said.

It’s important that the center be upgraded and kept at this location because the base has the restricted airspace needed to perform the flight tests.

"As the guy who’s been on the ground in Iraq and Afghanistan in a different role, you never really know what goes on behind the scenes to have the products and things you need to help you protect your Soldiers, save lives and execute your mission,” said Col. Paul Owen, commander of the New York District of the Army Corps of Engineers.

The new complex will be completed in winter 2016.

Dr. JoAnne Castagna is a public affairs specialist and writer for the US Army Corps of Engineers, New York District. She can be reached at joanne.castagna@usace.army.mil.  Follow her on Twitter at http://twitter.com/writer4usacenyc