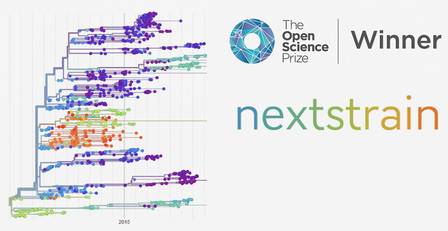 A prototype online platform using real-time visualization and viral genome data to track the spread of global pathogens like Zika and Ebola won the Open Science Prize competed for by international teams. The competition is an initiative by the National Institutes of Health (NIH) in collaboration with the Wellcome Trust and the Howard Hughes Medical Institute (HHMI).

The Open Science Prize is a global competition designed to foster innovative solutions in public health and biomedicine using open digital content. The prize, which was launched in October 2015, aims to forge new international collaborations that bring together open science innovators to develop services and tools of benefit to the global research community.

The winning team, Real-time Evolutionary Tracking for Pathogen Surveillance and Epidemiological Investigation, created the nextstrain.org prototype to pool data from researchers across the globe, perform rapid phylogenetic analysis and post the results on the platform’s website. The team will receive $230,000 to fully develop their prototype with NIH awarding $115,000 to the US members of the winning team, while Wellcome Trust and HHMI will contribute $115,000 to the winning team.

“Nextstrain.org placed first out of three top finalists, selected from a pool of 96 multinational, interdisciplinary teams including 450 innovators from 45 countries,” an announcement said, noting the “award is the culmination of a year-long process which included development and demonstration of working prototypes and multiple stages of rigorous review by panels of expert Open Science advisors and judges from the Wellcome Trust and NIH.”

“Genome sequences of viral pathogens provide a hugely valuable insight into the spread of an epidemic, but to be useful, samples have to be collected, analyzed and the results disseminated in near real-time. The statistical analyses behind nextstrain.org can be conducted in minutes, and can reveal patterns of geographic spread, timings of introduction events, and can connect cases to aid contact tracing efforts,” the announcement explained.

The phylogenetic analyses are posted on the website as interactive and easy to understand visualizations.

"Nextstrain.org aims to synthesize publicly available pathogen genomic data to arrive at an understanding of epidemic spread not available through traditional surveillance systems," said Trevor Bedford, Ph.D., of the Fred Hutchinson Cancer Research Center in Seattle, and one the two leaders of the team behind nextstrain.org.

"Our efforts with nextstrain.org are only possible through open data sharing by others in the community. We’ve really enjoyed working with these teams in the field as they collect and share viral genome data,” added the other team leader, Richard Neher, Ph.D., of Biozentrum at the University of Basel, Switzerland. “They hope that the platform will be of great use to researchers, public health officials and the public who want a snapshot of an epidemic.”

“All six finalist teams were considered exemplary by the funders and are to be commended for their tenacity in developing creative approaches to applying publicly-accessible data to solve complex biomedical and public health challenges,” a statement read. “The topics spanned the breadth of biomedical and public challenges, ranging from understanding the genetic basis of rare diseases, mapping the human brain, and enhancing the sharing of clinical trial information. Asevidenced from the six Open Science Prize finalists, public health and biomedical solutions are enriched when data are combined from geographically diverse sources. Final prototypes developed by the six finalists can be accessed here.

“Many congratulations to Nextstrain.org. Their prototype is an exemplar of open science and will have a great impact on public health by tracking viral pathogens,” said Robert Kiley, who leads Wellcome’s work on open research. “Overall, we had received many fantastic submissions for the prize, tackling issues from air quality to genomics and clinical trials to neuroscience. All entrants demonstrated what’s possible when data and code are made open for all. Wehope this competition has inspired and spurred on others to think about opening up data to create more innovation in this space.”

Dr. Patti Flatley Brennan, NIH Interim Associate Director for Data Science and director, National Library of Medicine, said, “This competition hallmarks a new direction in open science funding from disease-specific efforts toward disease agnostic projects in which scalable solutions can be applied to multiple disease areas and even to solving other scientific problems. In many ways, the Open Science Prize is a model program and NIH is looking forward to participating in new initiatives that accelerate open data sharing.”

“As increasing amounts of data are produced by scientists around the world and made openly available through publicly-accessible repositories, a major challenge to fully maximize this health information will be the lack of tools, platforms and services that enable the sharing and synthesizing of disparate data sources,” the statement said, noting, “Development in this area is essential to turning diverse types of health data into usable and actionable knowledge.”