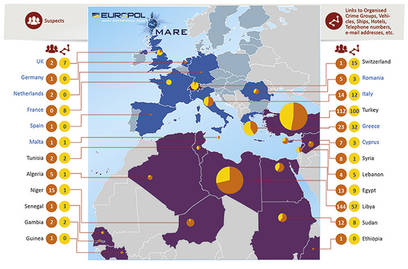 Greek law enforcement authorities, with the support of Europol, dismantled an organized criminal group suspected of facilitating the entry of irregular migrants — mainly Syrian nationals — into Greece from Turkey via maritime routes.

The group also smuggled victims from Greece to other EU Member States through a range of methods, and was involved in the production and distribution of forged travel documents and their trading to other organized criminal groups. The criminal network operated in Greece and was formed of members from several countries including Syria, Iraq, Egypt and Romania.

During the coordinated law enforcement action that took place in various locations in Greece on March 10 and 11, 16 suspects were arrested (two Romanians, two Egyptians, two Pakistanis, seven Syrians, one Indian, one Filipino and one Iraqi) and 20 premises were searched.

Migrants were smuggled from Turkey into Greece — to the islands of Rhodes and Kos — by using different types of boats. Once on Greek soil, the migrants were smuggled onwards to other EU countries by plane — using forged and original travel documents — or hidden inside trucks which were sent to Italy on private vessels and liner ships or by land.

Investigations revealed each migrant was charged from EUR 4,000 upto a maximum of EUR 9,000 for the travel, depending on the destination and documents required. The criminal group could have earned around EUR 7.5 million in illegal profits.

The joint action is part of a long-running investigation into human smuggling named Operation DAIDALOS led by the Attica Aliens Division in Greece. Europol has actively supported the investigation for over a year and has provided extensive operational and analytical support to the countries involved.

"This action sends the clear message that Europol and its partners are determined to pursue those responsible for these terrible crimes," said Rob Wainwright, director of Europol. "The events in the Mediterranean Sea emphasize the need for a coordinated approach in targeting these criminal groups. Europol has reinforced its capabilities to support EU Member States’ investigations in this area and has set-up the Joint Operational Team Mare, dedicated to tackling organized criminal groups responsible for the arrival by sea of large numbers of irregular migrants."

Dimitris Avramopoulos, European Commissioner for Migration, Home Affairs and Citizenship, said, "This operation is a great early example of how the European Commission, the agencies and the member states can, together, do more and better to counter migrant smuggling through Joint Operational Team (JOT) Mare. Operation DAIDALOS has led to the arrest and dismantling of a multinational criminal group suspected of facilitating the entry of irregular migrants and collecting millions of euros from smuggling and related criminal activities. Doing more to counter people smuggling is a priority for the European Commission and it will also be one of the main pillars of the European agenda on migration that we will adopt in May this year."

To assist the operation on the ground, Europol deployed a mobile office and an analyst to Greece, allowing for real-time information exchange and immediate cross-checks of all data gathered.

The influx of migrants via the Mediterranean Sea has been exponentially rising, with 220,000 migrants crossing in 2014. Intelligence shows organized criminal groups are actively facilitating the transport of these illegal migrants across the Mediterranean. These groups have also been linked to human trafficking, drugs, firearms and terrorism.

The problem is high on the agenda of Europol, the European Commission and concerned EU member states who recognize a more balanced strategy is required to combat illegal migration, as well as refocusing law enforcement resources to disrupt the organized crime groups involved. Shifts in volumes using different routes demonstrate how organized criminal groups are very adept at responding to law enforcement initiatives.

The intelligence-led, European response to this problem is the establishment of the Joint Operational Team (JOT) Mare, which was launched on March 17. Hosted at Europol headquarters in The Hague, JOT Mare will tackle the organized criminal groups who are facilitating the journeys of migrants by ship across the Mediterranean Sea to the EU.

JOT Mare will combine Europol’s intelligence resources and member states’ capabilities to carry out coordinated and intelligence-driven actions against the facilitators, as well as ensuring an intensified exchange of intelligence with Frontex and close cooperation with Interpol, national experts assigned to JOT Mare will facilitate the necessary cooperation between Europol and the services of the participating EU member states.

As well as collating and distributing appropriate intelligence, the data on the organized criminal groups will be analyzed and specialized intelligence reports generated.

The launch was attended by heads of law enforcement, among whom was Interpol Director Jürgen Stock, Frontex Deputy Director Gil Arias Fernandez and other high ranking officials from the EU member states involved in JOT Mare.