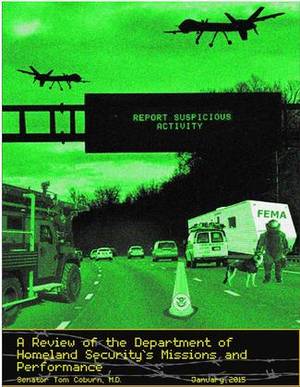 Tasked with the important responsibilities of preventing terrorist attacks, securing the country’s borders and responding to national emergencies, the Department of Homeland Security (DHS) plays a crucial role in securing the nation. However, according to Oklahoma Republican Sen. Tom Coburn’s final oversight report before retiring, DHS is struggling to execute its main responsibilities.

The report, A Review of the Department of Homeland Security’s Missions and Performance, found DHS is failing to execute any of its five main missions: preventing terrorism and improving security; securing and managing our borders; enforcing and administering our immigration laws; safeguarding and securing cyberspace; and strengthening national preparedness and resilience.

“Ten years of oversight of the Department of Homeland Security finds that the Department still has a lot of work to do to strengthen our nation’s security,” Coburn, former ranking member of the Senate Committee on Homeland Security and Governmental Affairs, explained. “Congress needs to review the department’s mission and programs and refocus DHS on national priorities where DHS has a lead responsibility.”

The report indicated that although DHS spends nearly $61 billion annually, the nation’s borders remain unsecure and vulnerable to illegal entry, allowing terrorists and drug trafficking organizations into the country. Less than 3 percent of illegal immigrants will ever be deported, and more than 700 miles of the US-Mexico border remained unsecured as of 2014, according to Coburn’s findings.

DHS’s failure to enforce immigration laws further endangers the nation. In particular, improper oversight of the Student and Visitor Exchange Program (SEVP) by Immigration and Customs Enforcement (ICE) threatens national security. According to the report, “In the past, people plotting terrorist attacks, including several of the 9/11 hijackers, were in the United States using student visas.”

“We are concerned that despite spending billions of dollars on border security, tens of thousands continue to enter our country illegally and, in 2014, 700 miles of our Southern border were unsecure,” Coburn said. “The same is true of cyber security. We have spent billions to protect against cyber-attacks, yet even White House computers have been susceptible to hacking.”

One of DHS’ principal missions is to “safeguard and secure cyberspace.” While DHS spends $700 million a year on cybersecurity programs, numerous audits by the department’s Inspector General (IG) have found DHS is not keeping pace with ever-evolving cybersecurity threats.

Coburn said, “The nature of cybersecurity threats—and the ability of adversaries to continuously develop new tools to defeat network defenses—means that DHS’s strategy for cybersecurity, which focuses primarily on vulnerability mitigation, will not protect the nation from the most sophisticated attacks and cybersecurity threats.”

DHS spends the largest share of its budget—$14 billion—on the Federal Emergency Management Agency (FEMA). As part of its mission to strengthen national preparedness and resilience, DHS has devoted 23 percent of its total departmental enacted budget of $61 billion for Fiscal Year 2014 on programs to help the nation respond to natural disasters and other emergencies.

However, inefficient spending of federal funding by FEMA has called into question whether greater federal expenditure is translating to increased preparedness. For example, FEMA’s flood insurance program encourages citizens to build and rebuild homes and businesses in flood plains, where they are more vulnerable todisaster.

To reform homeland security, Coburn offered a number of recommendations in the report, including better congressional oversight of DHS. He also emphasized the importance of DHS becoming a more “transparent partner with Congress” in an effort to win the trust of the American people and increase the transparency of its programs and operations.

“Reconsidering and reforming the Department of Homeland Security and its programs is a historic opportunity for Congress, the executive branch, and the American public,” Coburn said.

He added, “Refocusing DHS on the national priorities and federal responsibilities where the Department is the lead agency and empowering DHS’s leadership to execute its missions effectively and in a manner consistent with the Constitution will strengthen our nation’s security, improve our stewardship of resources, and demonstrate that our nation is committed to meeting its challenges.”

DHS spokeswoman Marsha Catron thanked Coburn for his report, but said it did not fully capture DHS’s progress.

“Dr. Coburn’s report on DHS overlooks much of the concrete and recent progress we have made over the past year to improve homeland security and the manner in which DHS conducts business,” Catron said.

Despite the grim findings of the report, Coburn expressed his confidence in DHS’s ability to recover by following the recommendations he laid out in his report.

“I am confident that Secretary Jeh Johnson is leading the department in the right direction,” Coburn commented, adding, “One of the biggest challenges that Sec. Johnson and DHS face is Congress and its dysfunctional approach to setting priorities for the department. Congress needs to work with the Department to refocus its missions on national priorities and give Secretary Johnson the authority to lead and fix the department.”

The 66-year old Senator retired Saturday with two years left in term after battling a recurrence of prostate cancer. Coburn delivered an emotional final speech in the US Senate last month, which concluded with his urging the Senate to uphold the Constitution.

“Can we cheat history? Can we do something better than has been done in the past? I honestly believe we can,” he said in his final Senate floor address. “But I don’t believe we can if we continue to ignore the wisdom of our founding documents.”

In his recent annual government waste report, Coburn disclosed that, while DHS announced early last year announced budget cuts “require[ed] difficult choices to align resources to address the greatest needs of the department,” it meanwhile “apparently [found that] one of those greatest needs is 236 memberships to a ‘state-of-the-art’ gym and spa in downtown Washington, DC. for some of the headquarters employees of Immigration and Customs Enforcement (ICE).”

In addition, his waste book disclosed that, “The Transportation Security Administration (TSA) also purchased gym memberships for some of its personnel, spending $52,650 on a contract so workers at Phoenix (Arizona) Sky Harbor International Airport could work out at a private club.”

“Interestingly,” the waste book said, “while exercising at a private gym by its employees was important enough for ICE to drop $400,000 on the priority, walking was not: the agency stated in its contract requirements that the gym must be less than 526 feet or one tenth of a mile from its office.”

And there’s many millions more in what Coburn said was wasteful, uncontrolled spending by DHS, including its fleet of 56,000 vehicles costing $485 million to operate annually, but about two thirds of which were underused, according to DHS’s Inspector General  (IG). The IG estimated that the total amount wasted on underused vehicles to be between $35.3 million and $48.6 million because of a lack of “adequate oversight and …  compliance with federal laws.”