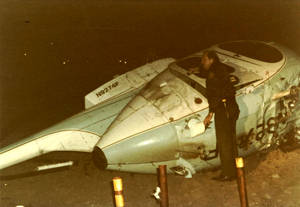 A Customs and Border Protection (CBP) helicopter that was forced to make an emergency landing after reportedly being struck by at least three bullets believed fired from an automatic weapon by narco-traffickers in Mexico during a counterdrug operation near Laredo, Texas isn’t the first time CBP choppers have been attacked and forced to land, one of which made a hard landing.

The shooting occurred around 5:30 pm Friday while the CBP Office of Air and Marine chopper crew was assisting Border Patrol agents on the ground interdict a well-coordinated narco-trafficking operation in the Rio Grande River Valley near Laredo, which is just across the river from Nuevo Laredo, Mexico where the ruthless Los Zetas cartel operates from.

“The helicopter was impacted by gunfire, hitting the side of the aircraft and the rotor blade. The pilot was able to make a safe landing, [and] there were no injuries,” a CBP spokesperson said a statement.

“The rounds penetrated and damaged the aircraft, forcing the pilot to make an emergency landing,” the FBI also acknowledged in a statement, adding the” FBI has initiated an investigation and will continue processing the crime scene with the Texas Rangers. Since this is an ongoing matter, no further details will be provided at this time.”

While attacks on low-flying CBP helicopters, forcing them to land, is rare, they’ve happened before, Homeland Security Today first previously reported. In fact, large chunks of solid stone can be forceful enough to pose a threat to CBP helicopter pilots. Rocks crashed at least one helicopter and forced the pilot of another to make an emergency landing.

In 1979, two Border Patrol agents narrowly averted being killed when their chopper was brought down in the Rio Grande River near Tijuana by a single large rock thrown at an altitude of 30 to 40 feet by a coyote. The two agents were assisting agents on the ground track a group of illegals trying to cross the border.
“74 Fox was working a group [of illegals] a short distance north of the flood channel and the group’s guide came north and started throwing rocks. He got lucky and a rock struck the tail rotor about 9 or 10 inches from the end of the rotor blade,” Homeland Security Today was told by a former Border Patrol agent directly familiar with the incident. “The rotor blade [was] made of a honeycomb material covered by a thin sheet of aluminum, and as it was spinning in excess of 10,000 RPM, the end sheared off.” And that “caused the helicopter to immediately start spinning uncontrollably. [The pilot] said he figured he had 10 or 15 seconds before he lost consciousness; so he just … crash land[ed] the helicopter on its skids. If he had not done that, the helicopter probably would havecrashed on its side, killing both of them.”

What’s more frightening, the former Border Patrol agent said, is “it was clear the [illegal] aliens would have attacked the agent-pilot and co-pilot … The pilot … emphasized that to me. I also spoke with the chief pilot, and he reiterated that.”

That wasn’t the only time that a CBP helicopter was damaged and forced down by a large rock. On June 9, 2010, in what CBP described as a “high profile incident,” an Air and Marine chopper out of McAllen, Texas was forced to land after a rock thrown by narco-smugglers struck the chopper’s left Plexiglas door windshield, creating a large hole and cracks in the Plexiglas.

According to a CBP summary of the event, while on routine patrol, the OAM pilots observed a vehicle that they decided needed “closer scrutiny.” Upon so doing, the pilots “identified several subjects transferring narcotics from the vehicle to nearby rafts.” Then, “suddenly the crew heard a loud pop, and observed a rock projecting from the left Plexiglas door and impacting the windshield. The pilots immediately executed precautionary measures, and landed the aircraft in a safe location.”

On the afternoon of December 14, 2009, the Nogales Port of Entry (PoE) came under fire from a strategic ridgeline inside Mexico just outside the PoE’s perimeter overlooking this busy and heavily armed cross-border facility.

The shots were fired from an AK-47 toward port checkpoint buildings. The whizzing lead slammed into a bus, a car and at least one PoE facility, narrowly missing occupants of the vehicles and PoE officers who were sent scrambling for cover. A hole that was bored into a PoE southbound checkpoint building by one of the 7.62x39mm AK rounds was left as reminder of the dangers CBP officers and Border Patrol agents face daily on the Southwest border.
Perhaps only coincidentally, the seige came on the heels of port officers and Nogales police having seized nearly $1 million in bulk cash concealed in several cars that were bound for Mexico.

The month before, the Tijuana Cartel is suspected of having been behind the “death threats” traffickers made against Nogales city police after two of its off-duty officers seized a quarter million dollars worth of pot they’d found while horseback riding just outside the city. The cartel also issued orders to gun down any off-duty officers who stumble upon future drug shipments.

Two weeks before, two Border Patrol agents were forced to shoot two suspected traffickers about 40 miles west of the Nogales PoE after the agents came under attack.

Today, the region of Nogales – on both sides of the border – remains a hot zone for cartel violence and threats. It’s where Border Patrol agent Brian Terry, a member of an elite Border Patrol Tactical Unit team, was gunned down on Dec. 14, 2011 while tracking members of a human smuggling operation.

Editor’s note: Read more about assaults and attacks on CBP officers and Border Patrol agents in the March 2014 Homeland Security Today cover report, Deadly Patrol, which is a finalist for a 2015 American Society of Business Publication Editor’s Impact/Investigative Award.