The prosecution of misdemeanor cases against undocumented migrants for improper entry into the United States more than doubled in fiscal year 2018 after a directive from then-Attorney General Jeff Sessions for U.S. Attorneys to prioritize immigration-related offenses, according to a review from the Government Accountability Office.

Prosecutions for alien smuggling rose slightly, while there was a slight increase from 2017 in the number of illegal reentry cases prosecuted at 25,112, though still not as high as the 31,670 cases prosecuted in 2014.

Out of about 62,000 misdemeanor improper entry cases brought in 2018, about 84 percent were moved through the legal system — with evidence presented, a plea and sentencing — in a day or less.

“DOJ, DHS, and the federal judiciary realigned resources to support the prosecution priorities outlined in the 2017 and 2018 memoranda, including personnel and physical space. In addition, agencies temporarily surged personnel to the southwest border,” GAO said. “For example, USMS reassigned personnel from other enforcement areas to judicial security duties to support increased immigration-related prosecutions.” 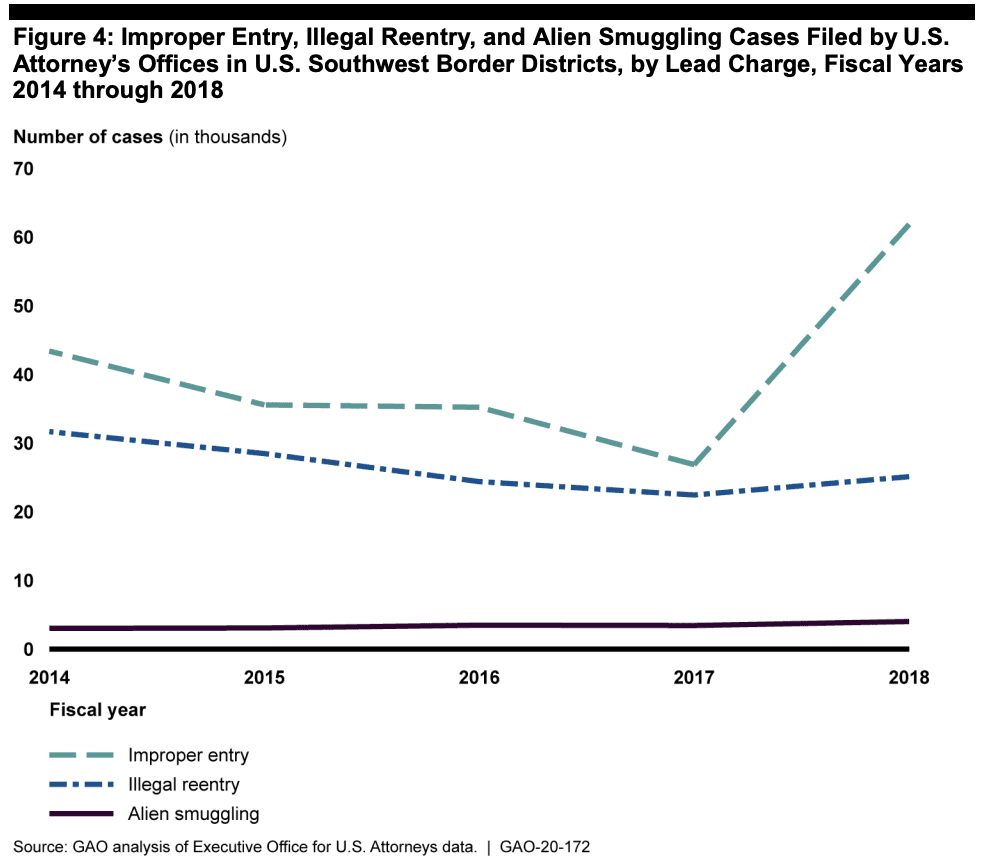 In response to the priority shift, U.S. Attorney’s Offices in the districts of Arizona, California Southern, New Mexico, Texas Southern, and Texas Western focused on misdemeanor improper entry cases, though not all were able to quickly increase prosecutions given their existing resources.

“In other districts, such as California Southern, USAOs had to establish new practices in coordination with other stakeholders in the federal criminal prosecution process—including the Department of Homeland Security (DHS), other DOJ components such as the U.S. Marshals Service (USMS), and the federal judiciary—before they could begin accepting a significant number of improper entry cases,” the GAO report noted.

GAO said the realignment of resources strained the U.S. Attorney’s Offices and U.S. Marshals, and shifted attention away from other duties.

“USAO officials in three locations stated that the more time prosecutors spend on reactive work—such as misdemeanor or felony immigration-related cases—the less time Assistant U.S. Attorneys (AUSA) have to work on other issue areas, including proactive cases that may take months or years of work to build, or civil cases. For instance, USAO officials from Texas Southern said that the high immigration caseload in McAllen affects AUSAs’ ability to prosecute other types of cases, such as Organized Crime Drug Enforcement Task Force cases,” the report said, adding that it took three months of adjustment for USAO officials in San Diego to no longer feel adverse effects on their ability to accept referrals for new felony prosecutions.

“USMS officials we spoke with in all five southwest border districts said that they reassigned deputies in fiscal year 2018 from proactive task forces (such as task forces dedicated to arresting individuals with active federal warrants) to judicial security court duty and detention security to support increased immigration-related prosecutions,” GAO continued, noting that U.S. Marshals officials were “concerned that the high demand for judicial security in southwest border districts may affect their ability to retain deputies.” A lack of detention space and time transporting detainees also strained the U.S. Marshals.

Federal courts in the affected district had to add weekend and telework hours to keep up with the caseload, which quickly filled court calendars. “According to federal court officials in Del Rio, the district judge’s calendar is so full that, in some cases, a defendant’s sentencing might be pushed back far enough that the defendant has already served more jail time than the federal sentencing guidelines recommend by the time the defendant is sentenced,” GAO said. Tucson court officials also told GAO that the restraints worn by detainees were damaging the furniture in the courtroom for improper entry cases.

Federal defense attorneys said that the influx of misdemeanors was affecting the amount of time they had to spend on felony cases. “These defenders described the process of preparing 100 or more defendants for criminal proceedings each day as draining,” GAO said.

A sensitive copy of the GAO’s findings was published in August; DHS, DOJ and the federal judiciary requested redactions for the new public report.

The review was requested by House Judiciary Subcommittee on Immigration and Citizenship Chairwoman Zoe Lofgren (D-Calif.), who said the report showed that money and resources were wasted by the zero-tolerance immigration enforcement.

“The fact that millions of dollars in resources were diverted from important law enforcement and national security functions so that this administration could prosecute vulnerable asylum-seekers and separate families is an abhorrent misuse and waste of taxpayer funds,” Lofgren said.