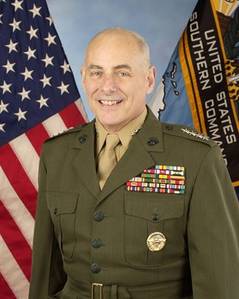 With his favorability numbers having increased significantly since winning the Presidency last month, President-Elect Donald Trump’s nomination today of retired USMC Gen. John Kelly – the longest serving Marine Gen. in history — to lead the Department of Homeland Security (DHS) is being met with praise from throughout both the Department of Defense and Intelligence Community.

He’s made no bones about venting his exasperation with “bureaucrats” and that foreign military counterterrorism operations are against a “savage” enemy who, “Given the opportunity to do another 9/11, our vicious enemy would do it today, tomorrow and everyday thereafter,” Kelly said during a 2013 Memorial Day address in Texas. “I don’t know why they hate us, and I frankly don’t care, but they do hate us and are driven irrationally to our destruction.”

Kelly ended his distinguished 45-year military career in February, retiring as chief of the United States Southern Command (SOUTHCOM) from his previous position as the Senior Military Assistant to the Secretary of Defense from March 2011 to October 2012.

Certainly as SOUTHCOM Commander, Kelly had a unique window into the rise of transnational criminal organizations throughout Mexico, Central and South America, as well as the entrenchment of Middle East bred Islamist jihadi organizations throughout the region, as was reported by Homeland Security Today in the August 2009 investigative cover report, Unholy Trinity: The Budding Latin American Alliance Between Narco-Cartels, Street Gangs and Jihadists.

Indeed, Kelly has been outspoken in warning about terrorism and other cross-border threats.

Duncan said in a statement, “In my capacity as Chairman of the House Subcommittee on the Western Hemisphere, I have worked firsthand with Gen. Kelly on numerous Western Hemisphere security issues during his tenure as the head of the Southern Command. He fully understands the threats from ISIS, Iran’s activities in South and Central America as well as the risks America faces due to our porous southern border.”

“General Kelly has a wealth of experience and knowledge of the threats facing our country in the 21st Century, and I amconfident he will help the President-Elect form a robust strategy to protect American from radical Islamic extremism here at home, protecting American sovereignty and dealing with the numerous security issues here in the homeland,” Duncan said.

“General Kelly’s depth of experience in managing large, complex organizations will be necessary for running a department with the size and complexity of DHS. Although I am troubled by his alarmist statements in the past on the security of our borders, I hope General Kelly’s decades of experience in working in government and with our international partners will be put to good use in the new administration,” stated Rep. Bennie G. Thompson (D-MS), ranking member of the House Committee on Homeland Security.

Thompson, known for his unabashed criticism of DHS, added, “Unfortunately, the President-elect has created an uphill battle for DHS with his extreme rhetoric on many issues from immigration to terrorism, and some of his appointments seem to share these views. However, the Secretary of Homeland Security must be a measured, unbiased voice with our nation’s national security as top priority.  I look forward to hearing more from the Secretary designee and the incoming administration soon on how they want to lead the department and keep the country secure.”

Federation for American Immigration Reform President Dan Stein said this afternoon that, “General Kelly has spent his life defending our nation and fully understands the critical role border security plays in protecting the country from the threats of terrorism, uncontrolled illegal immigration, and drugs. He will bring a renewed commitment to controlling our borders and ensuring the safety of the American homeland.”

Stein emphasized that under the Obama administration, “border security has been all but ignored, criminal aliens have been regularly released back onto the streets and the men and women risking their lives working in immigration enforcement have been largely demoralized.”

“General Kelly’s commitment to the nation’s security is without question, and his military expertise and experience fighting the influx of illegal drugs from Latin America gives him unique insight into the challenges faced by the nation’s immigration enforcement agents, as well as practical knowledge of border deterrents,” Stein concluded.

Kelly was the highest ranking US military officer to have lost a child during combat operations in Southwest Asia. His youngest son, 1st Lieutenant Robert Michael Kelly, was killed in action in Sangin, Afghanistan on November 9, 2010. The younger Kelly was a former enlisted Marine and was on his third combat tour as a US Marine Corps infantry officer. Kelly’s oldest child is a Marine Corps Major.

Last January, Kelly told Sgt. Eric Keenan, Defense Media Activity, that, “One of the worst things about getting promoted as an officer is that you get further and further away from day-to-day contact with young Marines.”

Keenan said, “Kelly learned the best thing you could do as a leader is look out for your Marines and let them know someone has got their back. He modeled his entire career around this concept, he said.”

“My whole last tour in Iraq, I was always on the road,” Kelly said. “To show up to a [forward operating base] in the middle of nowhere or at a convoy that’s broken down and talk to [Marines] as they’re changing the tire is the only way to do business.”

Keenan wrote, “Although promotions pulled him further away from his Marines, his extensive career has taken him all over the Corps and the world, from leading Marines from coast to coast and serving overseas during the Persian Gulf War, Operation Desert Storm and the Iraq War.”

Enlisting in the Marine Corps in 1970, in 1999, then Col. Kelly transferred to joint duty and served as the Special Assistant to the Supreme Allied Commander, Europe, in Mons, Belgium. He returned to the United States in 2001 and was assigned to a third tour of duty at Camp Lejeune, now as the Assistant Chief of Staff G-3 with the 2nd Marine Division.

In 2002, selected to the rank of Brigadier General, Col. Kelly again served with the 1st Marine Division, this time as the Assistant Division Commander. Much of Brig. Gen. Kelly’s two-year assignment was spent deployed in Iraq. He then returned to Headquarters Marine Corps as the Legislative Assistant to the Commandant from 2004 to 2007.

He was promoted to Maj. Gen. and returned to Camp Pendleton as the Commanding General, I Marine Expeditionary Force (Forward). The command deployed to Iraq in early 2008 for a year-long mission, replacing II Marine Expeditionary Force (Forward) as Multinational Force-West in Al Anbar and western Ninewa provinces. Now a Lt. Gen., Kelly commanded Marine Forces Reserve and Marine Forces North from October 2009 to March 2011.