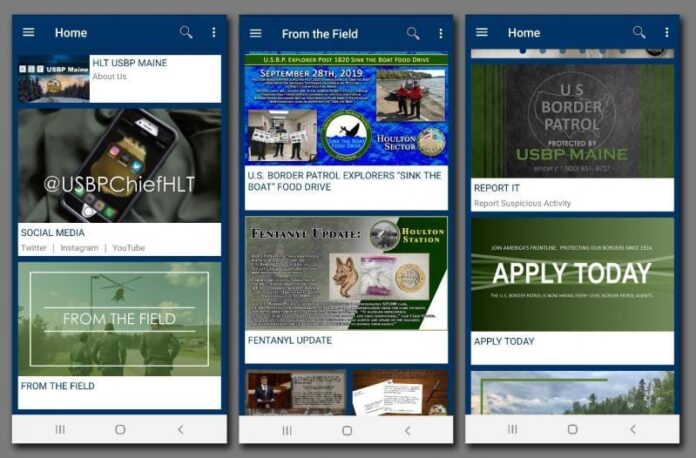 The U.S. Border Patrol, Maine released a new mobile application for public use.  The new application is aimed at increasing communication with the public and developing greater understanding of what is happening with the Border Patrol in Maine.

Designed as a means to enhance the communication between the public and the Border Patrol, the mobile application is intended to increase the public’s understanding of what is happening along the border in Maine through different features contained in the application.  Features of the application include links to USBP Maine’s social media accounts on Twitter, Instagram, and the YouTube Channel.  The application also has a “Report It” feature that will allow the public to report suspicious activity and send important information directly to the Border Patrol’s Border Intelligence Center (BIC).  Other features include a section for Veteran’s Support, Border Patrol news reports, and a link to apply for a career in the Border Patrol.

“The U.S. Border Patrol in Maine has always relied on the cooperation and assistance of the public.  Historically, anyone wishing to make a confidential report of suspicious activity had the option of calling a toll-free number to contact the United States Border Patrol in Maine or report it to the local authorities.  As technology continues to evolve, we must adapt in the way we do business and interact with our communities. With the addition of our mobile application, we now have a fast and easy way for our community’s members to report suspicious activity. The app has the ability to send useful information and to report suspicious activity and also send useful information like pictures, video, and GPS coordinates.  Information like this can help the Border Patrol and first responders by saving valuable time and enhancing the chances of an arrest,” said Jason Schneider, Acting Chief Patrol Agent of the U.S. Border Patrol Maine.

Titled “U.S. Border Patrol, Maine” the mobile application is free and available for download on Google Play and the Apple Store now.

The Border Patrol in Maine relies on the cooperation and assistance of the public.  Anyone wishing to make a confidential report of suspicious activity may call (800) 851-8727 or use the U.S. Border Patrol Maine mobile app to contact the United States Border Patrol throughout the state of Maine.