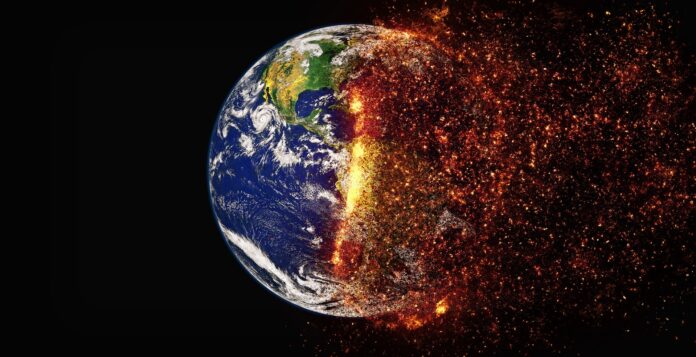 United Nations (UN) scientists on Monday delivered a stark warning about the impact of climate change on people and the planet, saying that ecosystem collapse, species extinction, deadly heatwaves and floods are among the “unavoidable multiple climate hazards” the world will face over the next two decades due to global warming.

“This report is a dire warning about the consequences of inaction,” said Hoesung Lee, Chair of the Intergovernmental Panel on Climate Change (IPCC).

“It shows that climate change is a grave and mounting threat to our wellbeing and a healthy planet. Our actions today will shape how people adapt and nature responds to increasing climate risks,” he said, adding: “Half measures are no longer an option.”

According to the report, human-induced climate change is causing dangerous and widespread disruption in nature and affecting billions of lives all over the world, despite efforts to reduce the risks, with people and ecosystems least able to cope being hardest hit.

This is the second in a series of three reports from the UN’s top climate scientists and its launch comes just over 100 days since the UN climate action summit in Glasgow, COP26, agreed to step up action to limit global warming to 1.5°C and stave off the worst effects of climate change.

UN Secretary-General António Guterres laments that the evidence detailed by IPCC is unlike anything he has ever seen, calling it an “atlas of human suffering and a damning indictment of failed climate leadership.”

With fact upon fact, this report, which focuses on impacts, adaptation and vulnerability, reveals how people, and the planet, are getting “clobbered” by climate change.

“Nearly half of humanity is living in the danger zone – now. Many ecosystems are at the point of no return – now. Unchecked carbon pollution is forcing the world’s most vulnerable on a frog march to destruction – now,” he declared.

Mr. Guterres said the world’s biggest polluters are guilty of arson of our only home.

In the face of such dire evidence, it is essential to meet the goal of limiting global temperature rise to 1.5 degrees, and the science shows that will require the world to cut emissions by 45 percent by 2030 and achieve net zero emissions by 2050.

“But according to current commitments, global emissions are set to increase almost 14 per cent over the current decade. That spells catastrophe. It will destroy any chance of keeping 1.5 alive,” said the UN chief.

One of the report’s core truths is that coal and other fossil fuels are choking humanity, the Secretary-General explained, calling on all G20 governments to live up to their agreements to stop funding coal abroad, and they must now urgently do the same at home and dismantle their coal fleets.

Moreover, he said that oil and gas giants – and their underwriters – are also on notice. “You cannot claim to be green while your plans and projects undermine the 2050 net-zero target and ignore the major emissions cuts that must occur this decade. People see through this smokescreen.”

Instead of slowing down the decarbonization of the global economy, now is the time to accelerate the energy transition to a renewable energy future, he said declaring fossil fuels a “dead end for our planet, for humanity, and yes, for economies,” and calling for developed countries, Multilateral Development Banks, private financiers and others to form coalitions to help major emerging economies end the use of coal.

The second core finding from the IPCC report is slightly better news: investments in adaptation work.

“As climate impacts worsen – and they will – scaling up investments will be essential for survival. Adaptation and mitigation must be pursued with equal force and urgency. That’s why I have been pushing to get to 50 per cent of all climate finance for adaptation,” Mr. Guterres explained.

Noting that the Glasgow commitment on adaptation funding is clearly not enough to meet the challenges faced by nations on the frontlines of the climate crisis he said that he is also pressing to remove the obstacles that prevent small island states and least developed countries from getting the finance they desperately need to save lives and livelihoods.

“We need new eligibility systems to deal with this new reality. Delay means death,” he said.

Saying that he is taking inspiration from all those on the frontlines of the climate battle fighting back with solutions, the Secretary-General said that he knew people everywhere were anxious and angry.

“I am, too. Now is the time to turn rage into action. Every fraction of a degree matters. Every voice can make a difference. And every second counts.”

The IPCC says that increased heatwaves, droughts and floods are already exceeding plants’ and animals’ tolerance thresholds, driving mass mortalities in species such as trees and corals. These weather extremes are occurring simultaneously, causing cascading impacts that are increasingly difficult to manage.

They have exposed millions of people to acute food and water insecurity, especially in Africa, Asia, Central and South America, on Small Islands and in the Arctic.

To avoid mounting loss of life, biodiversity and infrastructure, ambitious, accelerated action is required to adapt to climate change, at the same time as making rapid, deep cuts in greenhouse gas emissions.

So far, progress on adaptation is uneven and there are increasing gaps between action taken and what is needed to deal with the increasing risks, the new report finds. These gaps are largest among lower-income populations.

There are options to adapt to a changing climate. This report provides new insights into nature’s potential not only to reduce climate risks but also to improve people’s lives, the IPCC says.

“By restoring degraded ecosystems and effectively and equitably conserving 30 to 50 per cent of Earth’s land, freshwater and ocean habitats, society can benefit from nature’s capacity to absorb and store carbon, and we can accelerate progress towards sustainable development, but adequate finance and political support are essential.”

Scientists point out that climate change interacts with global trends such as unsustainable use of natural resources, growing urbanization, social inequalities, losses and damages from extreme events and a pandemic, jeopardizing future development.

“Our assessment clearly shows that tackling all these different challenges involves everyone – governments, the private sector, civil society – working together to prioritize risk reduction, as well as equity and justice, in decision-making and investment,” said IPCC Working Group II Co-Chair Debra Roberts.

The report provides a detailed assessment of climate change impacts, risks and adaptation in cities, and urban areas, where more than half the world’s population lives.

Climate change impacts to natural and human systems have direct effects on security. From zoonotic disease transfer to desertification, drought, and increasingly intensive storms, climate change is worsening and compounding the impacts that put humans at risk of greater disease spread, water scarcity, food scarcity, resource conflict, livelihood loss, and more. Understanding the causal mechanisms through which climate change leads to these threats is critical when investing in adaptation. At the same time, understanding the limits, hesitations, and barriers which hamper adaptation is crucial to ensuring human security.

On March 8, from 12-1 p.m. EST, the Center for Climate and Security will host a panel discussion, Decoding the New IPCC report on Climate Impacts: Implications for Security and Adaptation, featuring report authors and security experts. The panel will highlight the key takeaways from the IPCC report for the security community—connecting the dots between the science and the concrete actions security actors will need to take to prepare for the effects of climate change.

Find out more about the report at the IPCC