Super Cavitation could transform transportation infrastructure not only in the USA but also on a global scale through decreased emissions. 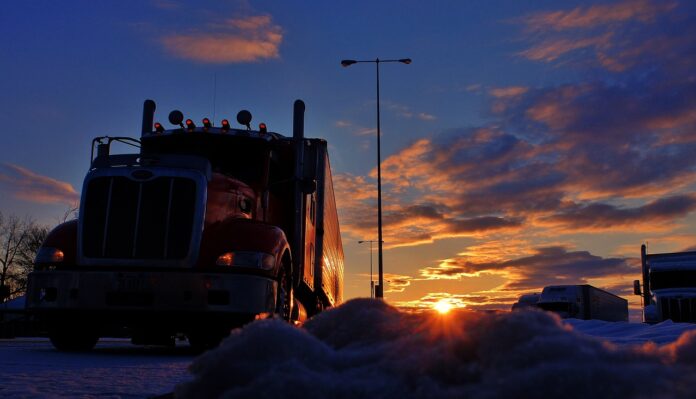 Recent advances in Super Cavitation are enabling both high performance and environmentally-friendly fuels with performance enhancements catching the attention of trucking firms and other transportation hubs around the globe. We describe the commercialization of this patented technology and its practical use in multiple merchants. Our team has performed quantitative analysis of how this Super Cavitation could transform transportation infrastructure not only in the USA, but also on a global scale through a conservative estimate of up to 40% decrease of emissions.

Two Generators were tested with unprocessed low sulfur diesel, followed by the cavitation of the same fuel and tested again with the contents of the day tank fully cavitated.

In modern DI Diesel engines, the raw emissions of NO X and SO2 are affected, apart from the fuel injection rate, by the atomization of the liquid jet and mixing of the fuel with the combustion air. Therefore, details of the fuel flow inside the injection nozzle play a critical role. The fuel flow injection of the cavitated fuel seems to be beneficial in balancing the nozzle spray fuel flow and overall efficiency of the burn by thoroughly stacking the fuel particles in the fuel at the cylinder, causing a balanced and more efficient burn.

In general, and by definition, Cavitation is the formation of vapor cavities in a liquid, small liquid-free zones (“bubbles” or “voids”), that are the consequence of forces acting upon the liquid. It usually occurs when a liquid is subjected to rapid changes of pressure that cause the formation of cavities in the liquid where the pressure is relatively low. When subjected to higher pressure, the voids implode and can generate an intense shock wave.

It should be noted that Cavitation is a significant cause of wear in some engineering contexts seen in general mechanics, for example. Collapsing voids that implode near to a metal surface cause cyclic stress through repeated implosion. This results in surface fatigue of the metal causing a type of wear also named “cavitation”. The most common examples of this kind of wear are to pump impellers, and bends where a sudden change in the direction of liquid occurs. Cavitation is usually divided into two classes of behavior: inertial (or transient) cavitation and non-inertial cavitation. Cavitation is usually an undesirable phenomenon. It is very often specifically avoided in the design of machines such as turbines, propellers, pumps, and eliminating cavitation is a major field in the study of fluid dynamics. However, it can be very valuable and does not cause any damage when the bubbles collapse away from machinery, such as in Super Cavitation.

When we process the fuel, we commonly refer to as “cavitated fuel”, we place the fuel through a procedure called hydrodynamic cavitation. Hydrodynamic cavitation describes the process of vaporization, bubble generation and bubble implosion which occurs in the flowing fluid as a result of a decrease, and subsequent increase, in local pressure. Cavitation will only occur if the local pressure declines to some point below the saturated vapor pressure of the liquid and subsequent recovery above the vapor pressure. If the recovery pressure is not above the vapor pressure, then flashing is said to have occurred. In pipe systems, cavitation typically occurs either as the result of an increase in the kinetic energy (through an area constriction), or in other words, by passing the fuel through a constricted channel at a specific flow velocity or by mechanical rotation of an object through a liquid. In the case of the constricted channel, and based on the specific (or unique) geometry of the system, the combination of pressure and kinetic energy can create the hydrodynamic cavitation cavern downstream of the local constriction generating high energy cavitation bubbles. Once the bubble generation succeeds, the fuel follows a “re stacking process” in which the fuel particles are better mixed together and oxygenated causing a more efficient mixture.

In order to prove our technology, we proceeded to test (two) generators at a hospital facility with regular untreated fuel followed by the fuel processed by the Kavitus equipment supplied by Dillon Boiler Services, Inc.

Generator was run for 30 min prior to testing, once under load, a calibrated analyzer was installed in the common stack, followed by initiating the testing, which yielded the following results: 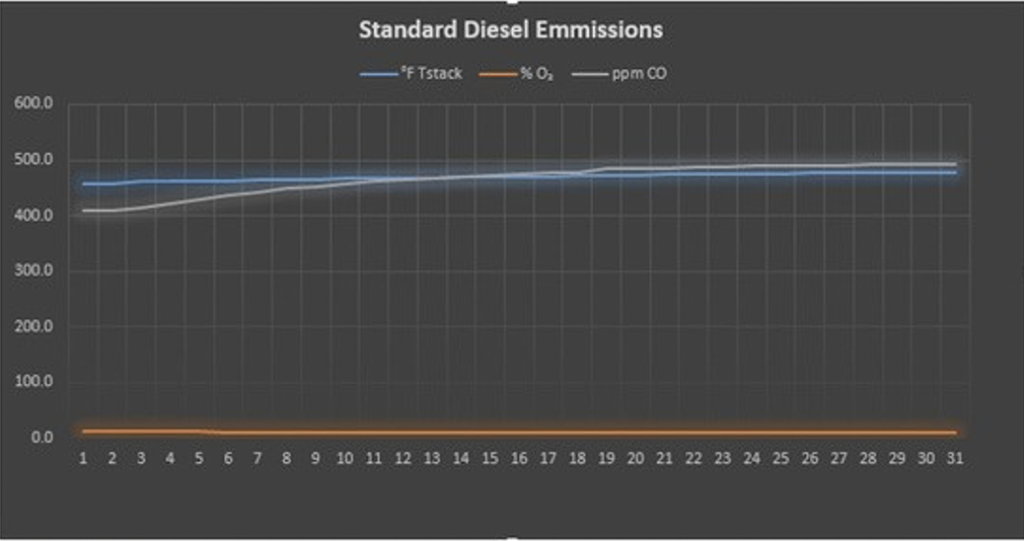 As we see above, the engine is running a common stack temperature of 470-480°F degrees, at this rate the CO generation is at 471 ppm, with NOX at 743ppm. This properly maintained and cared for engine is running at peak performance at approximately 10% O2.

Data was compiled, and to aid in understanding the overall condition, we proceeded to compile the Minimum, Maximum and Mean for the entire data set for Generator 1 above 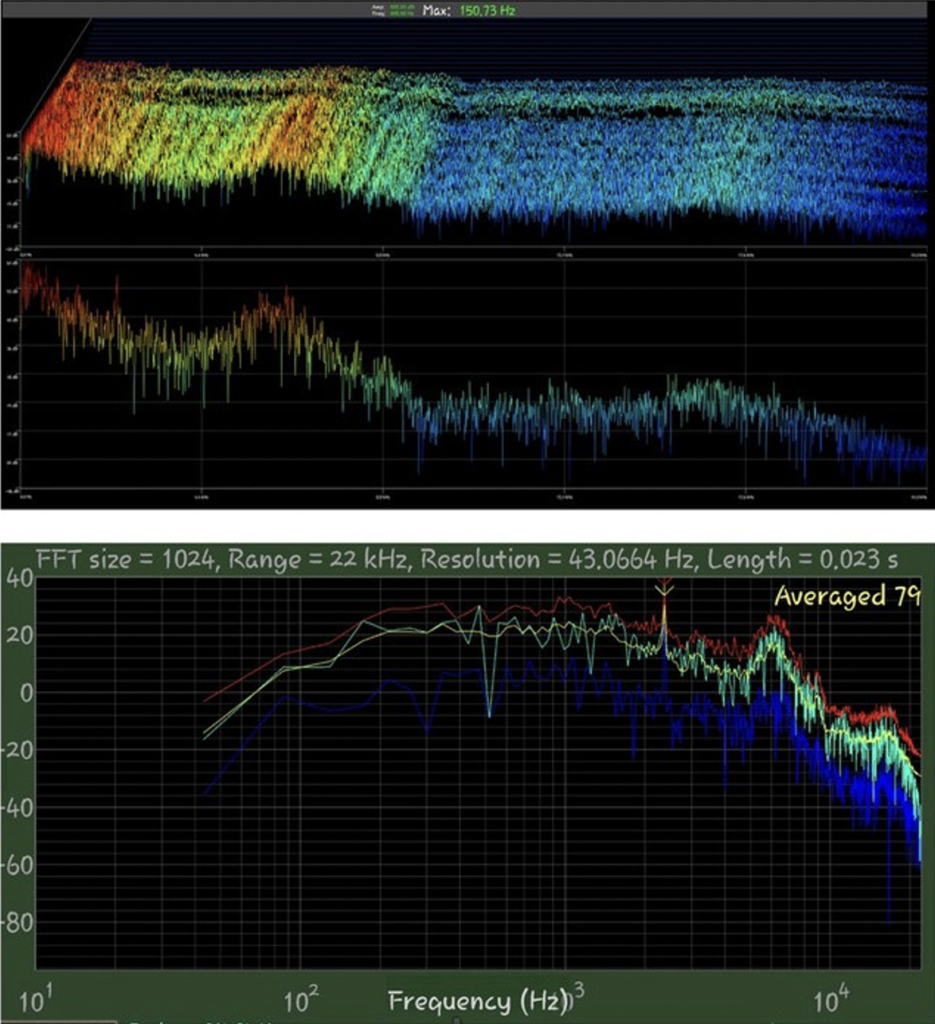 Once the cavitation process was started, we proceeded to measure the sound analysis of the process, which is one way of proving cavitation. Please note that the environment was causing some interference over the unit. However, the results are clear, as shown in Figure 3.

a. Generator 1 with cavitated fuel:

Once the day tank was processed through cavitation, we tested the generators after running for approximately 30 minutes: 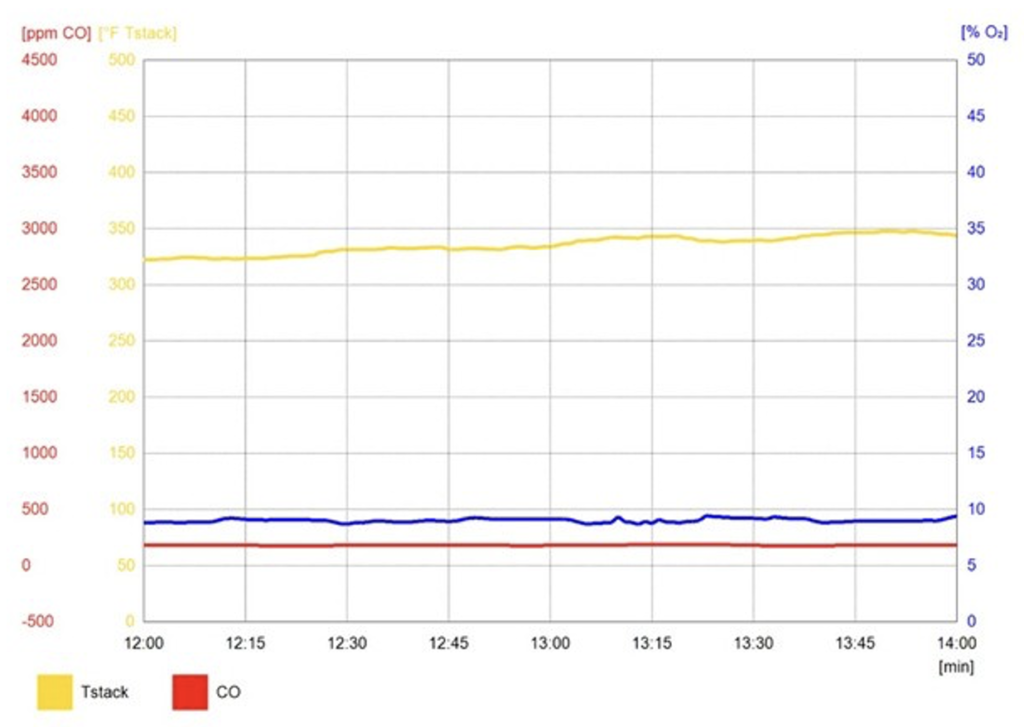 b. Generator 2 with cavitated fuel:

Once the day tank was processed through cavitation, we tested the generators after running for approximately 30 minutes: 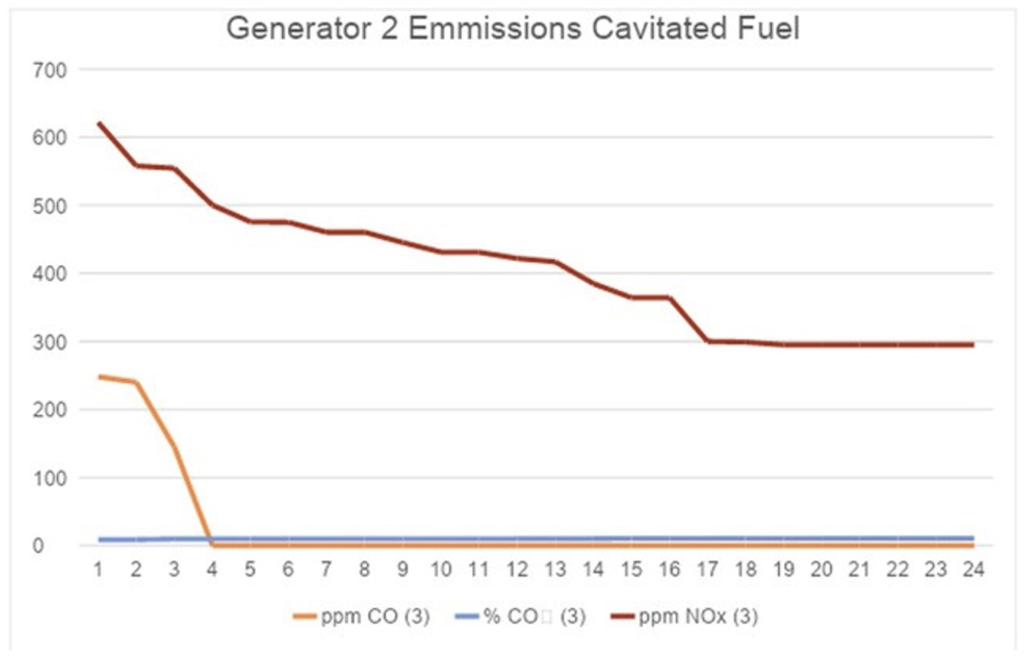 Recent advances in Super Cavitation are enabling both high performance and environmentally-friendly fuels with performance enhancements catching the attention of trucking firms and other transportation hubs around the globe. We describe the commercialization of this patented technology and its practical use in multiple merchants. Our team has performed quantitative analysis of how this Super Cavitation could transform transportation infrastructure not only in the USA, but also on a global scale through a conservative estimate of at least 40% decrease of emissions.

Our analytical approach to Super Cavitation shows a real path to enhanced performance coupled with a more environmentally-friendly solution than current transportation fuels. It is clear that these patented technologies are deployable immediately in the transportation sector and usable in a plethora of other markets/market segments with a conservative decrease of at least 40% of emissions. We will report on additional developments of commercialized products in the upcoming months.

Marco Barreto, Jack McNamara, Paul Routhier, Tom Cellucci, and Jimmy Redmon
Marco Barretto, Vice President – Controls Div., Dillon Boiler Services Co., Inc., started his Mechanical Engineering career specializing in aerospace, federal licensed in powerplant and airframes gained many years’ experience with engines fuel systems and avionics. His Interest in aero-derivatives, power generation and steam moved him to start working with major boiler manufacturers in the steam production and efficient fuel handling on large steam power utility plants. In 2008, Mr. Barreto specialized in Electrical engineering , using PLC and automation controls and began work at Dillon Boiler Services in 2011, designing, implementing, and providing state of the art custom fuel handling and combustion controls for the industrial boiler industry. With several awards, Mr. Barreto is highly recognized in the boiler industry as well as in the aviation community as a Leader and at the forefront in technology. Jack McNamara, Founder and Board Secretary of UES and JPI², preceded with combat service in the US Navy, and since 1986, owner of Dillon Boiler Services in Fitchburg MA. After military service and college, Mr. McNamara began work as a mechanical engineer at Dillion in the mid-70s before acquiring the company, one of the most prestigious industrial brands along the East Coast, having continuously served customers since the turn of the 19th Century in the early 1800s. Mr. McNamara is recognized by several professional associations for advanced development of mechanical services, emissions management, and technical training aligned with community college and institutional programs. Paul Routhier, Founder of UES and JPI², preceded with combat service in the US Air Force and over forty- years of success in industry spanning several market verticals. Mr. Routhier has built, owned and operated, and later profitably divested nearly a dozen small to medium-size companies. Employing and providing technical training to hundreds of individuals, his companies have made a profound difference in the lives of communities across Massachusetts and broader New England. The Hon., Thomas A. Cellucci, Ph.D., MBA CEO and Board Member JPI, has been a senior executive in both the private and public sectors for over 43 years to include serving as the US Government’s first-ever Chief Commercialization Officer in the Executive Branch, working for both President George W. Bush and President Barack Obama. Today, he continues to assist the US President's team and the Joint Chiefs of Staff. Dr. Cellucci holds a PhD in Physical Chemistry from the University of Pennsylvania (1984), an MBA from Rutgers University (1991) and a BS in Chemistry from Fordham University (1980). He has authored or co- authored 29 scholarly books and over 438 high-tech business and peer- reviewed scientific articles, while also serving on 23 Boards. Tom has raised over $3.9B in public- private partnerships for the US Government and over $3.2B in the private sector. Jimmy Redmon manages JR Auto Tech LLC and Mco Truck & Equipment LLC in Dallas, TX. After serving with the 82nd Airborne on Fort Bragg, he pursued a career in the transportation industry, dealing with parts, maintenance, asset procurement and sales.