USTRANSCOM Adds to Research on COVID-19 Exposure on Flights 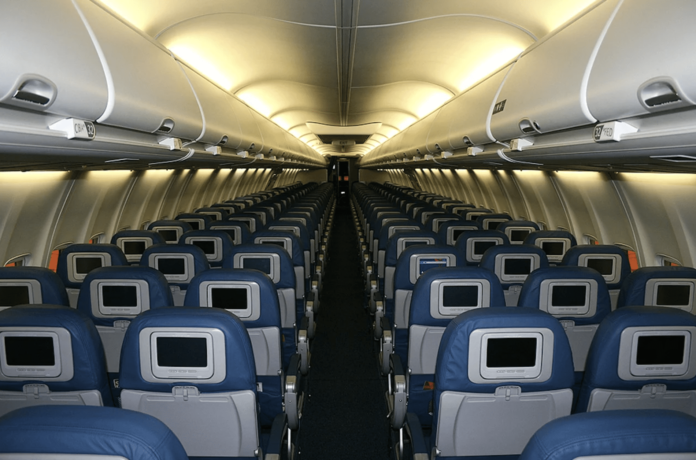 U.S. Transportation Command (USTRANSCOM) has released the results from its Commercial Aircraft Cabin Aerosol Dispersion Test showing the overall exposure risk from aerosolized pathogens, like coronavirus, is very low on the type of aircraft the command contracts to move Department of Defense personnel and their families.

The test, conducted in late August, was performed by the Zeteo Tech, S3i, the University of Nebraska’s National Strategic Research Institute and Defense Advanced Research Projects Agency on aircraft types frequently contracted by USTRANSCOM, the Boeing 767-300 and 777-200. This provided a real-time method for mapping tracer particle concentration for passenger across four cabin zones on the 777-200 and three sections for 767-300 Boeing aircraft.

“Our mission here at U.S. Transportation Command is to conduct global logistics operations on behalf of the Department of Defense. Part of this mission involves moving military personnel, civilians and families around the globe,” said Vice Adm. Dee Mewbourne, deputy commander of USTRANSCOM.  “We invested in a study to inform us if our mitigation measures are providing the safest possible means of transportation.

The Patriot Express is a commercial flight contracted by USTRANSCOM to transport passengers on official military duty and their families. More than 300 aerosol releases were performed over eight days and involved inflight, simulated inflight, and on-the-ground testing.

“Within the scope of the test, the results showed an overall low exposure risk from aerosolized pathogens like COVID-19 on these aircraft,” said Mewbourne.

Mannequins with and without face masks sat in various seats on the aircraft while fluorescent tracer particles were released at intervals of two seconds to simulate breathing for a minute during ground and in-flight tests. Real-time fluorescent particle sensors were placed throughout the aircraft at the breathing zone of passengers to measure concentration over time.

The test revealed that the released aerosol was rapidly diluted by the high air exchange rates observed in the airframes. The time the aerosol tracer particles remained detectable within the cabin averaged less than six minutes. For comparison, a typical American home takes around 90 minutes to clear these types of particles from the air.  The high air exchange coupled with high efficiency particulate air (HEPA) filtration of all recirculated air, means a commercial aircraft’s air supply system provides protection greater than the design standards for a patient isolation room or a hospital operating room.

“While the tests did have some limitations, specifically it only considered a single infected passenger and did not attempt to gather data reflecting passenger movement about the cabin, the results are encouraging,” said Cmdr. Joe Pope, USTRANSCOM operations directorate liaison for the testing. “For both the 777 and 767 airframes, the calculations show about 54 flight hours are required for cumulative inhalation of an assumed infectious dose.”

“This data will help us develop strategies for cabin loading and seating configurations to mitigate potential risk of person-to-person transmission of the aerosol particles,” Pope said.

One of the initial responses to the Coronavirus by the DOD was to stop or limit travel including via air. In May, the travel ban was lifted for military members, but this came with new restrictions to prevent the spread of COVID-19 while traveling.

Military members and families are still required to participate in a restriction of movement prior to departure, to wear a mask the entire flight, and quarantine upon arrival depending on their final destination. Airlines are also sanitizing surfaces routinely. Even with these prevention methods, a small number of travelers arrive at their destination testing positive for the virus. There has been little clear evidence to date if the infections were contracted while aboard flights.

The August test included multiple series of microreleases of aerosol tracer particles simulating a COVID-19 infected passenger with and without a mask on. The masks used during testing were standard pleated 3-ply surgical masks. The test used more than 40 Instantaneous Biological Analyzer and Collector (IBAC) sensors that detected aerosol concentrations at passenger breathing zones in different sections of the airframes. DNA tagged aerosol tests were also performed along with surface sample collections from high-touch areas like arm rests and seat backs.

“Our military members and families depend on the Patriot Express to get them to their destination,” said Mewbourne. “These results enhance our understanding of exposure risk within the cabin and inform our decisions as we strive to provide the safest methods of transportation.”

The data collected will be shared with the Department of Defense and the broader scientific community. This test was conducted in partnership with Boeing and United Airlines, as well as DARPA, Zeteo Tech, S3i and the University of Nebraska’s National Strategic Research Institute.

This encouraging news for travelers adds to other recent research on cabin air quality during the pandemic.

Read the story at USTRANSCOM