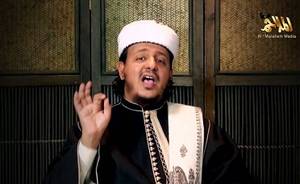 Al Qaeda in the Arabian Peninsula (AQAP) released a five-minute audio recording Friday, "A Word About The Blessed Raid In Paris," by its chief cleric Sheikh Harith Al Nadhari, in which he congratulated the jihadis who attacked the Paris office of Charlie Hebdo as "heroes.”

The satirical newspaper’s editor and cartoonists who’d repeatedly satirized Prophet Muhammad in cartoons were put on an AQAP hit list in March 2013.

Although Al Nadhari didn’t explicitly claim AQAP was responsible for the attack, he referred to them as a "believing group of Allah’s soldiers" and "heroic mujahedeen."

Homeland Security Today has reported though that the avowed jihadists who attacked Charlie Hebdo, killing 12, are known to have had direct ties to AQAP.

“Al Nadhari extols the attackers, calling them heroes who have avenged Muhammad and have taught a lesson to those who insulted him,” said the Middle East Media Research Institute (MEMRI), which monitors jihadist social media sites. “He also thanks the attackers, while saying that he wishes he was with them.”

In the short audio, Al Nadhari reaffirmed the need for Muslims to fight anyone who insults Muhammad and defames Islam. He also noted that France is among the leaders of disbelief [infidels], and “that it has no one to deter it from continuing its aggressions against Islam and Muslims aside from what Allah has ordained Muslims to do in that regard (i.e. that Muslims should fight the unbelievers),” MEMRI reported.

Al Nadhari therefore urged the French people to stop their aggression against Muslims in order to live in safety and called them to become Muslims, saying that will be "better" for them.

"The enemies of Allah’s prophet [Muhammad], who have [declared their] disbelieve in him … and insulted him, the wicked from the sons of France, have assumed that Allah shall not avenge His messenger, and they have thought they are safe from Allah’s ruling regarding them … [But] Allah has come to them from where they didn’t expect, [allowing to] overcome them, and tormented them by the hands of the believers.”

"Some of France’s sons have misbehaved regarding the prophets of Allah, [and as a result] a believing group of Allah’s soldiers rose against them, disciplining them, [and teaching them] the limits of the freedom of expression,” Al Nadhari said, adding, “Soldiers who love Allah and His prophets have come to you, [and they] do not fear death [but] love martyrdom for Allah’s path.”

"Allah, after the Sahaba [Muhammad’s companions], has men who take revenge, and support Allah and His prophet,” he said. “Indeed, [I] promise by Allah, we shall [even] compete with the Sahaba in defending the prophet of Allah, and we shall follow in their footsteps in defending him.”

"O heroic mujahedeen … thanked [are your] hands; I wish I was among you,” Al Nadhari stated.

"O Muslims,” he said, “the jihad against the unbelievers brings dignity in [this] life and happiness in the Hereafter. [So] how come we shouldn’t fight he who insulted the prophet, defamed the religion, and fought the believers? France today is among theleaders of disbelief, [it] insults the prophets, defames the religion, and fights the believers, and has no deterrence against it only by which what Allah has ruled regarding it [i.e. that Muslims fight the unbelievers]. Therefore, strike upon the necks.”

Continuing, Al Nadhari said, "O French people, until when you will [continue to] fight Allah and His prophet? If you become Muslims, then it will be better for you… O French people, it is better for you to stop your aggression against Muslims, [so that] you may live in safety. [But] if you refuse [and choose] only war, then behold the glad tidings, [since] by Allah, you shall never enjoy security as long as you fight Allah and His prophet and fight the believer …”