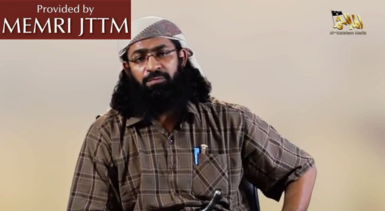 Al Qaeda in the Arabian Peninsula (AQAP) stated Thursday that one of its top leaders and spiritual advisor, Sheikh Nassir bin Ali Al Ansi, was killed in a drone strike that also killed his son and several other men.

AQAP’s announcement was delivered by Khalid Batirfi, aka Abu Al Miqdad Al Kindi, an AQAP commander who, along with a few hundred other prisoners, were freed last month by AQAP in its attack on the central prison in Al Mukalla, the capital of the Hadramout governorate in Yemen.

MEMRI said, “Batirfi noted some of the places visited by Al Ansi during that time, including the Philippines, Kashmir, Tajikistan, Afghanistan and Yemen. He said Al Ansi had received religious and military training at the hands of the best people in each field, and had known top Al Qaeda figures like Osama Bin Laden and Ayman Al Zawahiri, among others. Batirfi also said that despite dedicating almost a decade of his life to religious studies, Al Ansi also was involved in holding military workshops, and authoring various military encyclopedias. He also said that Al Ansi trained fighters and sent them to Iraq, Afghanistan and elsewhere.”

While in US military custody by Joint Task Force-GITMO, Rubaysh – like so many other GITMO detainees who’ve been released – twice was determined should remain in “detention under DoD control.” He was captured in 2001 and spent five years at GITMO before the Bush administration released him into Saudi custody on December 13, 2006 – only weeks after JTF-GITMO declared for the second time he should remain under DoD control. He escaped from the Saudis and made his way back into the ranks of Al Qaeda.

In 2013, Rubaysh called for jihad against Americans, saying, “It is my duty to spur the Muslims to kill the Americans, to get them out of the Muslims’ land.”

The Department of State’s Rewards for Justice program put a $5 million bounty on his head and designated him a Specially Designated Global Terrorist.

When Rubaysh was captured, according to his leaked classified JTF-GITMO file, he had a “bank receipt” from Saudi Arabia’s largest private bank, Al Rajhi Banking and Investment Corporation, which changed its name to Al Rajhi Bank in February 2006. In its July 2012 investigative report, US Vulnerabilities to Money Laundering, Drugs, and Terrorist Financing: HSBC Case History, the Senate Committee on Homeland Security and Governmental Affairs Permanent Subcommittee on Investigations stated a “2003 CIA report allegedly stated [Islamist] extremists ‘ordered operatives in Afghanistan, Indonesia, Pakistan, Saudi Arabia, Turkey and Yemen’ to use Al Rajhi Bank.”

“After the 9/11 terrorist attack in 2001,” the report stated, “evidence began to emerge that Al Rajhi Bank and some of its owners had links to financing organizations associated with terrorism, including evidence that the bank’s key founder was an early financial benefactor of Al Qaeda.”

According to the 339-page report, “In 2007, additional information surfaced about Al Rajhi Bank’s possible links to terrorism, including articles on a 2003 report by the CIA titled, Al Rajhi Bank: Conduit for Extremist Finance, which found that ‘[s]enior Al Rajhi family members have long supported Islamic extremists and probably know that terrorists use their bank.”

Before he was killed, Al Ansi made increasingly broader use of social media to call for attacks on Western targets, and repeatedly urged Muslims in the West to carry out lone wolf attacks.

Last November, AQAP’s media company, Al Malahim, released what the jihadist group said was the first installment in a 55-minute video interview with Al Ansi in which he reiterated AQAP’s call for jihadi groups to attack Western targets wherever possible in reprisal for the US-led attacks in Iraq and Syria, and urges Muslims living in the West to carry out lone wolf attacks.

The call for lone wolf jihadist attacks throughout the West, including America, came on the heels of an August joint FBI/Department of Homeland Security “Joint Intelligence Bulletin” to law enforcement across the nation that said, “we continue to assess that violent extremists who support ISI[S] have demonstrated the capability to attempt attacks on US targets overseas with little-to-no warning. We further assess that—because of the individualized nature of the radicalization process—it is difficult to predict triggers that will contribute to homegrown violent extremists (HVEs) attempting acts of violence. Moreover, HVEs who act independently—lone offenders—present law enforcement with limited opportunities to detect and disrupt plots, which frequently involve simple plotting against targets of opportunity.”

Earlier, in September, Abu Muhammad Al Adnani, the official spokesman for the Islamic State, released an audio message via jihadi forums and Twitter calling for lone wolf attacks in the West, specifically identifying law enforcement, military and other government officials as targets.

ISIS supporters, meanwhile, issued an English language hit-list of 100 US military personnel, including their photos and addresses. The list – which Homeland Security Today reviewed — began to be circulated on jihadi forums and social media on March 21.

The hit list is much like the hit list Al Qaeda supporters circulated on jihadist social media sites in June 2011, which Homeland Security Today first reported. The difference is the current list provides the home addresses of most of the service members on the new list, including top officers in very important command positions.

Addressing the Mujahedeen in his message released Thursday, MEMRI said, Batirfi said the battle with the enemies of Islam is a blessing bestowed upon them by Allah. He reminded the faithful that, despite the steep price paid by so many brethren having been killed and imprisoned, the Mujahedeen have nonetheless managed to continue their journey.

“Batirfi tells them that these days people are more receptive to the Mujahideens’ message, which Batirfi considers a victory in and of itself,” MEMRI said. “He also reminded theMujahideen that the death of jihad leaders has always been a common thing, especially when major events and achievements were taking place on the ground. In that regard, he mentions, for example, how ‘Abdallah ‘Azzam died after the defeat of the Soviets in Afghanistan, and how Osama Bin Laden was killed following the onset of the Arab Spring.”

“Turning to AQAP’s enemies, namely the Crusaders (i.e. the US),” MEMRI said, “Batirfi boasted that killing the Mujahideen will not affect the jihad, while noting once a jihad leader is killed, another takes his place. He also said the killing of the Mujahideen has failed to bring victory to their enemies, and has led, in fact, to Muslims turning to jihad.”

"You have killed from among us thousands of martyrs, but were you able to stop our surge or divert our path?" Batirfi asked, adding, "You have fought our religion, but [you ended up] increasing the Muslims’ dedication to the call of jihad and fighting."