Terrorist leadership decapitation remains a key component of U.S. counterterrorism policy. While its utility in producing desired counterterrorism policy outcome remains a point of contention, and beyond the scope and aims of this article, in this largely descriptive analysis the author compares and contrasts research trends and reactions to the deaths of Osama bin Laden vs. Abu Bakr al-Baghdadi on certain jihadi websites and mainstream social media platforms. [i]

The author conducted a basic Google Trend Search, which is Google’s trend feature measuring the popularity of a search term of interest. The feature is useful in discerning the rise or decline of certain trends. Keywords lookup, such as the terms Abu Bakr al Baghdadi and Bin Laden in English, Russian, Turkish, and Arabic (i.e. Abu Bakr al Baghdadi, Baghdadi, البغدادي, أبو بكر أل بغدادي, bağdadi, Аль Багдади, Osama bin Laden, , أسامة بن لادن etc.), was applied to compare their popularity over time. Although not necessarily scientific compared to polls or surveys, Google Trends can be helpful in discerning important insights about more recent developments or trends, such as the death of Abu Bakr al Baghdadi in our case. Google Trends are measured on a scale 0-100, where 0 represents a low research volume.[ii]

Graph 1 below depicts Google Trend graph for the query Osama bin Laden (English and Arabic) since 2008 (globally). As the graph indicates, May 2011 represents a high-volume popularity, which also corresponds with the month and year of Bin Laden’s death. The subsequent years are characterized with relatively low popularity.

Graph 2 and 3 below reflect Google Trend graph for the query Abu Bakr al-Baghdadi (English, Arabic, Turkish, and Russian) between October 20, 2019, and November 23, 2019 (globally). October 2019 represents a high-volume popularity, which also corresponds with the month and year of Baghdadi’s death. The breakdown between YouTube search and Web search is also presented below, suggesting the higher search index of Arabic spelling of the term in YouTube but a steady decline of volume in both instances over time. Comparatively speaking, in both bin Laden and Baghdadi’s case, there is a steady decline in search volume index following their deaths.

Google Trends was also applied to look at the popularity of the terms in Syria and Iraq, considering they remain hotbeds of ISIS-related terrorism. The data were recorded between November 16, 2o19, almost three weeks after Baghdadi’s death, and November 25, 2019. The data suggests a relatively high search volume index in both countries (See Graph 4 and Graph 5).

As depicted in Table 1 below, both cases bear resemblance in that online forum participants expressed skepticism over the deaths of bin Laden and al-Baghdadi, respectively. The fact that photos of bin Laden and al-Baghdadi verifying their deaths were not released served as a pretext to suggest deception on the part of the United States. In both cases, there were some who neither believed nor denied the killings but waited for a confirmation from their trusted media sources. Moreover, in both instances, forum visitors stressed enduring legacy of militant jihad and jihadi struggle (Table 1). 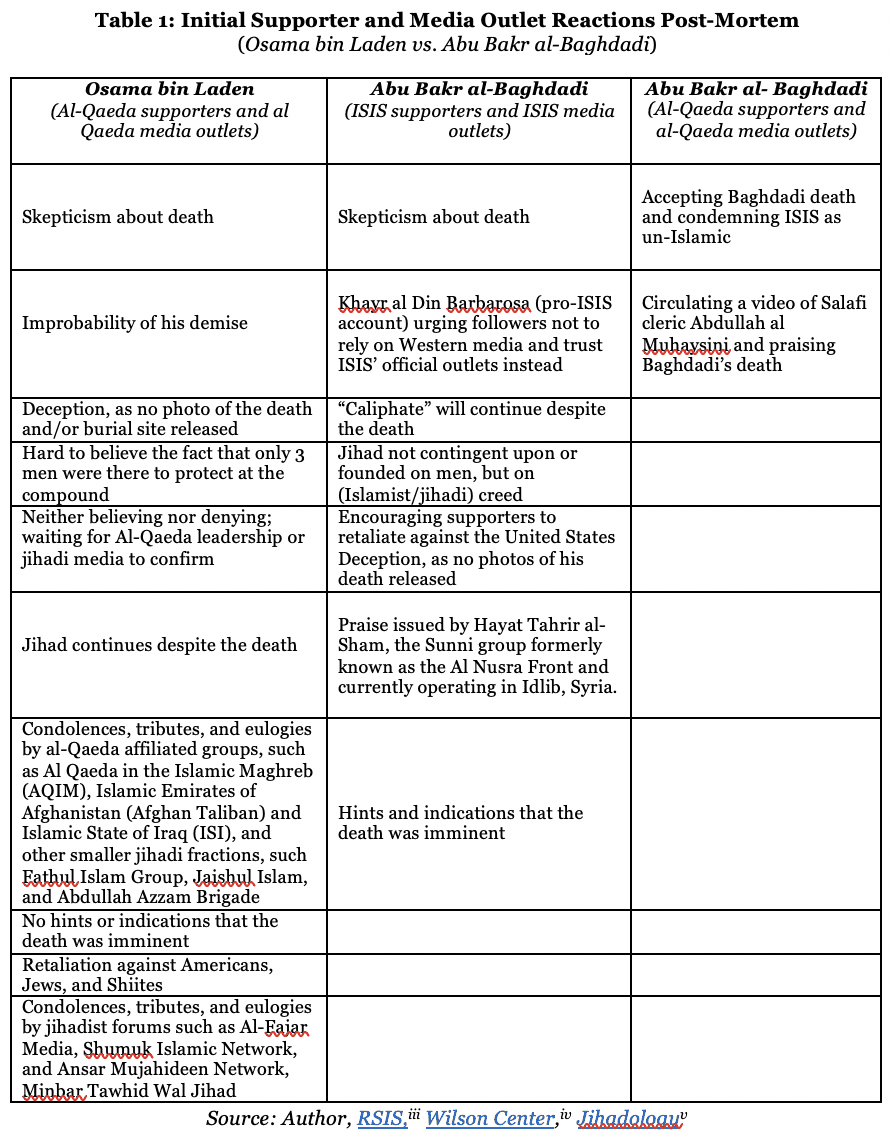 The author also traced close to 100 Facebook accounts that expressed direct or indirect support for ISIS. Although a relatively small sample size, most of the observed Facebook accounts lacked effusive tributes and eulogies dedicated to al-Baghdadi. To demonstrate, following bin Laden’s death, a number of campaigns were launched to disseminate information about bin Laden as a person. In one instance, a Facebook page was created with over 10,000 fans, leading to hundreds of comments.[vi] The author was unable to find similar, large-scale dissemination campaigns in the case of Baghdadi’s death on Facebook, though one must also consider stepped up law enforcement surveillance and social media takedown efforts that may have led to the removal of such materials. Also note that this brief analysis was time-bound and did not focus on other, more encrypted social media platforms.

While it is wrong to assume that al-Baghdadi’s death spells the end of ISIS as an organization, literature and the author’s findings suggest there was not much mourning or sympathy among ISIS’ supporters for his death. This was also evident in the voices of scores of ISIS fighters and their family members who survived the group until the bitter end and ended up in Baghouz, Syria,[vii] and a number of comments predicting Baghdadi’s imminent death (Table 1). The same can be concluded in that much of the discourse in the forums revolved around circumstances of Baghdadi’s death and around his passing, and not on efforts to translate the grief into large-scale retributive and retaliatory actions (Table 1). In fact, only 5 percent of the total Facebook accounts examined by the author invoked or called for immediate retributions in response to al-Baghdadi’s death. This stood in stark contrast to posts that accompanied bin Laden forums following his death, where the visitors were called to either engage in individual/group operations or wage media war online, supposedly with a majority of them opting for the former.[viii]

Thematically speaking, in the wake of Baghdadi’s death, al-Qaeda seems to want to project and position itself as a promising alternative, capable of remedying ISIS’ organizational fracture and offering a new direction in strategy, namely by asking ISIS supporters to quit and join al-Qaeda (Table 1). In addition, compared to bin Laden, al-Baghdadi’s death received less attention and support from its network of over a dozen affiliates in Libya, Khorasan Province, West Africa, Central Africa, and Somalia, among others (Table 1). This may perhaps reflect a resolve and determination on the part of such groups to, in the words of some counterterrorism experts, “pursue parochial interests and rebuff advice from central leadership holed up thousands of miles away.” [ix]

[ii] Churick, N. (2018). “ How to use google trends for keyword search: 7 effective ways,” available at https://ahrefs.com/blog/how-to-use-google-trends-for-keyword-research/; Also note that relative popularity in Google Trends is calculated as a ratio of the query’s search volume to the total number of searches.

[vii] Speckhard, A., & Shajkovci, A. (2019). “ Real voices from the caliphate talk back to Abu Bakr al Baghdadi,” Homeland Security Today, available at https://www.hstoday.us/subject-matter-areas/terrorism-study/real-voices-from-the-caliphate-talk-back-to-abu-bakr-al-baghdadi/