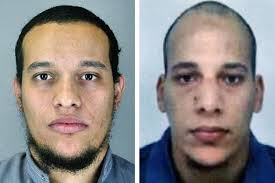 French security forces, including several elite counterterrorism units, continue to hunt for the two main suspects of the deadly attack Wednesday on the offices of the newspaper Charlie Hebdo, killing 12, including the editor and  cartoonists. A French police office also was killed at point blank range.

The satirical newspaper’s editor and cartoonists had been targeted by Al Qaeda and other jihadists for the publication’s cartoons of Prophet Mohamed over the years, including a cartoon of a turbaned Muslim on a wheelchair pushed by a man dressed as an orthodox Jew with the caption, “Intouchables 2.” Another cartoon depicted a naked Mohammed exposing his butt to a film director, which was apparently inspired by a 1963 film starring French film star Brigitte Bardot.

The two men authorities identified are brothers Said Kouachi and Cherif Kouachi, both French in their early 30s. Cherif  was convicted in 2008 on terrorism charges for recruiting jihadists to join Islamists in Iraq and sentenced to three years in prison. Eighteen months of the sentence were suspended, however.

Cherif, who called himself Abu Issen, was part of the "Buttes-Chaumont network" that worked to send jihadists to fight for Al Qaeda in Iraq. He also had been detained by French police in 2005 while on his way to board a plane for Syria.

Boubaker Al Hakim, a jihadist tied to Al Qaeda was a central members of the Buttes-Chaumont network, according to authorities.

Consequently, questions are being raised about why Cherif in particular was not being more closely monitored given the intelligence the French police had on him.

A third accomplice, 18-year-old Hamyd Mourad, is believed to have captured last night during a raid by police and a French counterterror unit in Reims in north-eastern France. AFP reported

at the time that a member of the elite anti-terror unit had warned media there could be "a showdown," or that the suspects might escape.

The three men are said to be linked to a Yemeni terrorist network which counterrorism officials earlier told Homeland Security Today is likely Al Qaeda in the Arabian Peninsula, which had earlier marked the editor of Charlie Hebdo for death “for crimes against Islam," along with eight other individuals, including a US pastor.

Authorities said all three men are believed to have recently returned from Syria where they were trained by jihadis fighting with Al Qaeda and the Islamic State, but it hasn’t been confirmed.

Other arrests linked to the Charlie Hebdo attack have been made following the raid in Reims.

The Kouachi brothers reportedly robbed a gas station, taking food and gas and firing guns in Northern France today indicating they may be trying to head out of France, possibly to the UK. The area provides a way to Calais, which has a crossing to the UK border and Belgium.

Meanwhile, a French policewoman was shot dead in Paris, but French police have not linked the killing to the Charlie Hebdo attack, nor ruled out a link.

A second person was shot and seriously injured in a Paris suburb before the gunman fled.

French police released photos of the brothers, telling the public they are considered "armed and dangerous,” a police bulletin said.

Far from shutting the press down, in a show of solidarity publications around the world have been republishing cartoons deemed so offensive by radical jihadists like Al Qaeda and the Islamic State and all their affiliates and allies. The public turnouts for moments of silence and support for those who were killed in the attack and support are sending a very strong message to terrorists – You want a war? You’ve got one, and there’s more of us!

Many senior Muslim leaders and organizations also have been speaking out against the attack.