Following the collapse of the so-called Islamic State, return, and possible return of thousands of foreign terrorist fighters (FTFs) from the conflict zones in Iraq and Syria, many governments will be facing their first national legislative and counterterrorism policy test. Principally, now that the cadence of ISIS-perpetrated terrorist attacks in the West has slowed, notwithstanding instances of sporadic incidents that evoke impulses of caution and continue to remind us of the group’s existence,[i] steering the undercurrents in this respect are not only attempts on the part of many governments to evaluate policy responses that have and will govern country behaviors in dealing with the FTF threat, including violent extremism in general, but also attempts to engage in damage control over what some would consider contentious policy responses in dealing with FTFs.

Apart from the current debate on FTF repatriation from the conflict zones in Iraq and Syria,[ii] many countries are striving to ascertain implications and any contradictions that may lie at the heart of broad criminalization laws and policies implemented in the context of FTFs. By way of an example, governments are likely to continue to evaluate the overall utility of broad criminalization laws and policies in light of the passage of major UN Security Resolutions (e.g. UNSCR 2178, 2396, etc.). While noble and well-intentioned, in adapting the precepts or guidelines of UNSCR on FTF threat, the future debates are likely to focus on the question of whether country responses were driven by actual security needs and not by aims to meet or placate a certain legislative agenda (e.g. EU accession, alignment with EU-level counterterrorism policies and directives, etc.).

Further evaluations are needed to assess the extent to which broad criminalization laws and policies have in reality aided countries in the way of striking a right balance between public safety and security needs and criminal justice considerations and have not affected the very foundations of their existing legal systems instead (e.g. leading to an increase in investigations, charges, prosecutions, etc., but also inability to secure evidence, in Syria and Iraq, for instance, for prosecution purposes).[iii] Furthermore, the threat of, or actual, criminal measures are often described as being more effective in some areas and not in others. For instance, some countries have proven to be more resilient at curbing terrorism-related financing and recruitment domestically than preventing the outflow of FTFs to the conflict zones in Iraq and Syria. In the context of the latter, such preventative endeavors were especially problematic when recruitment and mobilization efforts were framed along religious lines, namely militant jihadi (e.g. ISIS) or Catholic vs. Orthodox (conflict in Ukraine) narratives.[iv]

Much of the ongoing discourse is also likely to involve the question of criteria by which foreign fighters in general are or should be indicted or prosecuted. This particular debate is likely to take center stage given the recent evidence suggesting that in many cases foreign fighters are not being indicted or prosecuted for the same criminal  offenses.[v] This will encompass not only FTFs who joined the Islamic State in Iraq and Syria, but also westerners who flocked to Northeastern Syria to join YPG and other Kurdish-led formations[vi] and fighters who participated in the Ukrainian conflict.[vii] While some countries have instituted necessary legislation to address citizen travel to, and participation in, foreign conflicts, the legal implications associated with fighting violent extremist and terrorist groups have yet to be tested by many countries.

With the territorial defeat of ISIS, some FTFs are known to have diffused to other active conflict areas both inside and outside Syria and Iraq. In this regard, many governments remain vested to find ways to encourage further defections and elicit defector support to reduce recruitment into, or support, for violent and terrorist groups. Aside from apparent intelligence-related utility (e.g. generate information to target the group operationally) associated with encouraging further defections, defections are necessary to target the legitimacy and public perceptions toward the group. Defection and disengagement efforts are likely to be considered and implemented in conjunction with Countering Violent Extremism (CVE), Disarmament, Demobilization, and Reintegration (DDR) and other mechanics of transitional and transnational justice.[viii]

Chart 1: Conditions [Non-exhaustive] that are Conducive to Encouraging Defections 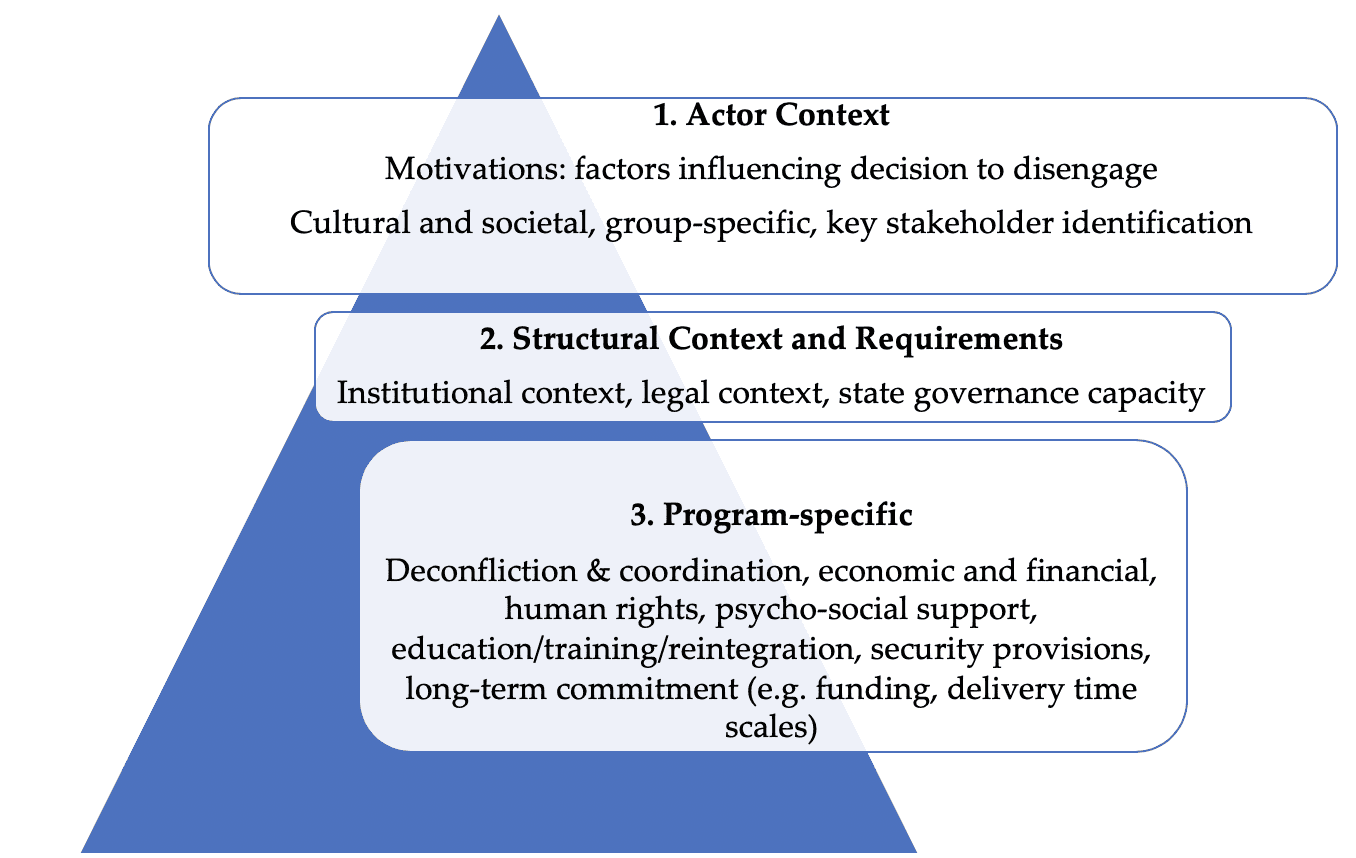 [i] Nadeau, L., B. (2020). “ Just-freed terrorist killed by cops after London stabbing spree,” The Daily Beast, available at https://www.thedailybeast.com/man-who-stabbed-several-people-in-streatham-south-london-shot-by-london-police-in-terrorist-incident?via=newsletter&source=Weekend

[ii] Speckhard, A., & Shajkovci, A. (2019). “Who are the ISIS fighters in custody, and how can they be repatriated?” Homeland Security Today, available at https://www.hstoday.us/subject-matter-areas/counterterrorism/who-are-the-isis-fighters-in-custody-and-how-can-they-be-repatriated/

[iii] Author discussions with European and Balkan judges and prosecutors, 2019-20

[viii] Bastrup-Birk, J., et al. (2018). “ A pathway to defections: An assessment framework for processing defectors and disengaged fighters,” Bureau of Conflict and Stabilization Operations and Stabilisation Unit, available at https://assets.publishing.service.gov.uk/government/uploads/system/uploads/attachment_data/file/816113/Pathway_to_Defections_-_US-UK.pdf