Does ISIS Have a Lone Wolf Network Across the Globe?

The relentless terrorist PR machine seemed to be unraveling in November 2018 after a man crashed his car into some shopfronts in Melbourne, Australia, jumped out and started stabbing passers-by, killing one. Shortly afterward, he was shot by the police. At first, ISIS claimed responsibility, describing him as an IS “fighter.” But a few days later, IS’s weekly Arabic newsletter al-Naba’, published by their central information “ministry,” disavowed this claim, and went on to point out that most lone actors had never met any IS agents and were self-motivated. What was going on?

In a report published by the International Centre for Counter-Terrorism at The Hague, an unnamed staff member at the European Counter-Terrorism Centre (ECTC) at Europol studied claims made by ISIS about lone actors from 2016-18 to shed light on how the group actually operates.

IS started systematically encouraging lone actor attacks in the West in 2016. Sometimes communication was controlled, and credit claimed centrally. At other times the initiative seems to have been left to the perpetrators.

The whole program was run by a separate setup within ISIS – the “external security” or al-amn al-khariji. Vulnerable individuals would be contacted online and incited to carry out attacks, the report notes. Networks of “clean men” (unknown to security forces) provide a link back to the center, enabling valid claims of responsibility. 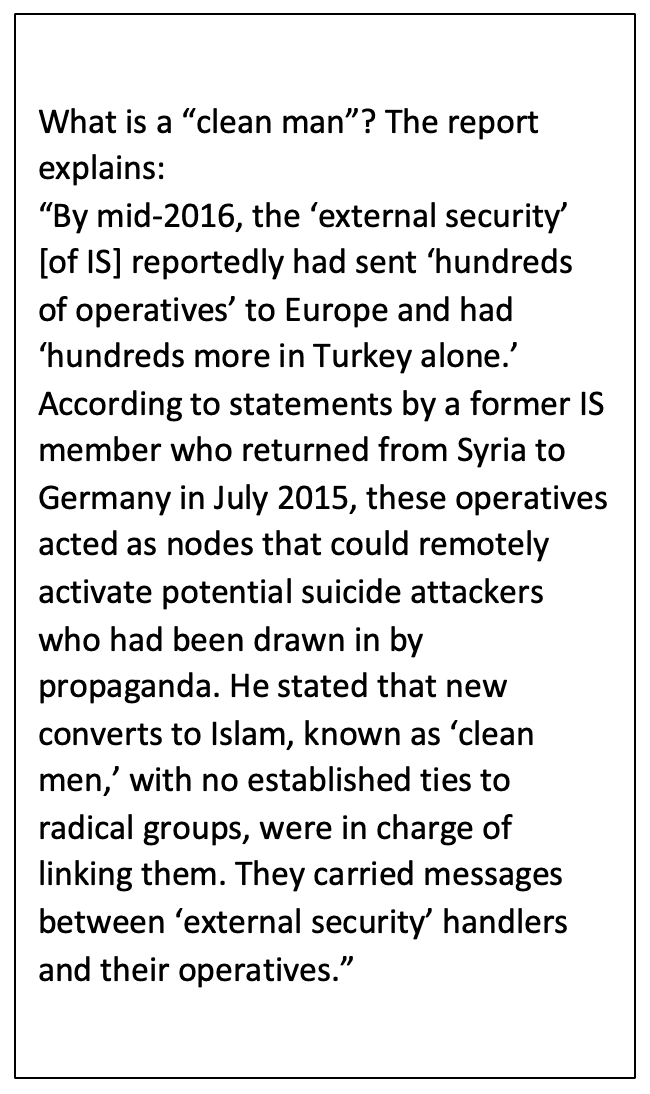 Internal, Arabic-language ISIS publications tended to report incidents later, suggesting that they deferred to the “external security” for clearance. A network of publications aimed at various internal, Islamic audiences and externally at the West spread the word. The aim was to maintain and develop IS’s reputation and ultimately credibility as the leading Islamic extremist movement.

At its height, this IS international operation was clearly sophisticated and adept, the report says, as “’external security’ members showed high levels of operational information security awareness, using different platforms, chat functionalities in video games and new mobile phones, among other means, to contact and retrieve data, including video statements, from lone actors.”

But increasingly the message was fragmented. The 2016 arson attack on a Shi’a cultural center in Malmö, Sweden, and an alleged bomb plot at Charles de Gaulle airport in Paris in 2017 were both claimed as the work of IS soldiers in internal publications, but not mentioned in those magazines and newspapers directed to the outside world. In contrast, the 2017 bombings in the Champs Elysées and Brussels Central Station were claimed as the work of “caliphate soldiers” in Rumiyah, a onetime ISIS publication for external audiences, without having previously been claimed by IS in their internal media.

Motivating the home base and encouraging IS supporters in the West were crucial factors, the report stresses. Claims were made when they would support these aims, and incidents overlooked when they did not.

Toward the end of the period studied, it became clear that the PR and communication system was struggling. The Oct. 2, 2017, Las Vegas mass shooting was initially claimed as the work of a “caliphate soldier” for which no evidence emerged, and the claim was quietly dropped. The failed bomb attack on a London Underground train in 2017 was clumsily and inaccurately reported as the work of “a security detachment of IS soldiers” when in fact it proved to be the work of a single 17-year-old Iraqi refugee. It began to look as if opportunistic reasons drove responsibility claims to encourage home audiences. But the international network seemed no longer able to provide dependable verification.

This research into the messaging and PR network of IS concludes that the West is dealing with a complex organization that is breaking down into informal networks. It may now be more based on seizing opportunities than implementing a disciplined strategy. In one sense this is perhaps a sign of success in the West’s fight against the terror group. But it leaves a potent, shadowy network of individuals who can communicate, share experience, and motivate each other and newcomers.

“The remnants of IS’s external operations structures seem to persist as a network of individuals that can communicate and, possibly, cooperate based on their common experience and acquaintance,” says the report. “With regard to the persistence of the threat from lone actors in the future, much will depend on these operatives’ personal influence on others and their motivation to continue the activities of ‘IS soldiers’ in the West.”

The challenge of international terrorism directed or inspired by ISIS has changed, but remains a live threat.