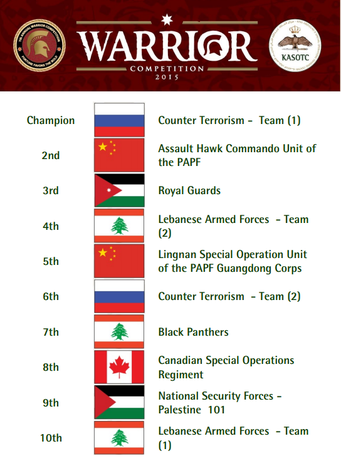 In February, a highly sophisticated and technically produced video, "Healing of the Believers’ Chest," was released by the Islamic State (ISIS) through social media sites showing Jordanian pilot Mu’ath  Al Kassasbeh – who’d been shot down and captured by ISIS during coalition airstrikes — being burned alive while trapped inside a small metal cage. Later that month, ISIS announced it was providing screenings of the 5-minute video, "Muslim Rejoicing over the Jordanian Pilot’s Punishment,” in Iraq’s Ninawa province.

Ever since the kidnapping and brutal execution of Al Kassasbeh, the Hashemite Kingdom has assumed a much higher-profile role in the war against regional jihadi terrorism — in particular against the Islamic State.

With that as the backdrop, former US special operations members working at King Abdullah Special Operations Training Center created the Annual Warrior Competition in which elite counterterrorism squads from several countries went to Jordan’s capital, Amman, to participate in what organizers call “The Olympics of Counter Terrorism.” The contest was started in 2009 when the King Abdullah II Special Operations Training Center (KASOTC) opened just outside Amman. The center is run by Jordanian Armed Forces which hosts and funds the Warrior Competition.

The goal of the competition is to build esprit de corps among special operations and police forces from around the world as they partner to fight terrorism. Other aims of the competition are to facilitate sharing of best practices, lessons learned, technology and hardware, and to strengthen international cooperation.

This year, 35 counterterrorism squads from 18 countries, including fellow members of the military coalitions fighting rebels in Yemen and Islamic State jihadists elsewhere in the Middle East, arrived in Jordan to participate in the 7th annual Warrior competition which took place last week, from April 19 -23, at a cost of $200 million.

Teams from the United States, Russia, Saudi Arabia, Afghanistan, Bahrain and China also took part in 10 events, which included storming buildings and evacuating airplanes in a series of exercises with names like Top Gun, Urban Assault, Hostage Rescue, Gun Gauntlet,  Desert Stress Shoot, Airbus Seizure, Cross Country Stress Shoot and the King’s Challenge, the latter of which included a cross-country run and four shooting ranges where the participants were tested on their ability to use pistols, shotguns, sniper and assault rifles.

The events were aimed to test the skills, fitness and cohesion of each team. Over the four days of the intense competition, the teams raided buildings, stormed hijacked jets, rescued hostages and shot targets with live ammunition, all while being scored for speed and accuracy.

As part of a “shock and awe” building method of entry drill, participants mounted a mechanical breach to engage steel targets inside the building. The Ironman Stress Shoot was a pistol and rifle event in which participants had to make it through a maze and engage enemy targets. The King’s Challenge involved engaging targets as part of a 5-stage sequential event that included running, a pistol, rifle and sniper stage at the King’s pistol stage.

The competition opened with a drill by a Jordanian special forces unit which rescued mock-hostages from a passenger plane following one of the hostages having been executed, requiring a hasty attack. The team rappelled from a helicopter into a five-story building to hunt down the terrorists. Once the assault forces were inside the aircraft, they conducted a close quarter battle with the terrorists while at the same time evacuating the hostages from the emergency exits.

The special “anti-terror” squad representing the United States gave their all in a cross country shooting exercise in Amman on April 22. The team jumped over walls and climbed nets, with one member climbing a rope to ring a bell fixed at the top of the structure. After navigating wires while crawling on the ground, the team then rushed to a shooting range where they fired at targets using pistols and HK 416 assault rifles.

A team comprising members of Jordan’s Hamzah Bin Abdul Mutalab Brigade, the “Royal Guards,” won first place in the sharp shooting contest. The Royal Guards team was competing against a US Marine Corps team in the final stage of the contest.

A new vehicle also was tested at the event — the AL-JAWAD. This is an armored internal security vehicle comprising an armored body based on a heavy duty Ford F-550 chassis. The vehicle has high levels of ballistic and fragmentation protection, and its large doors enable quick deployment and large bullet-proof glazed areas offer wide fields of vision for the commander and crew. It was designed by the King Abdullah Development & Design Bureau, and manufactured by the Jordan Light Vehicle Company.