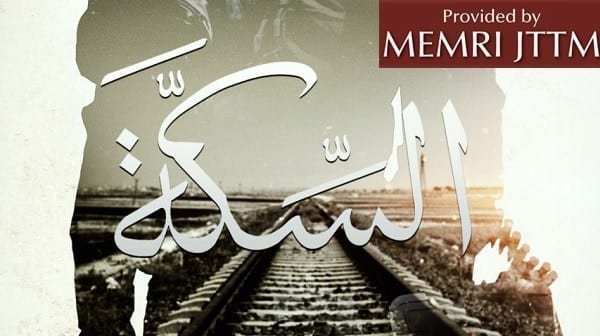 On Nov. 27, the MEMRI Jihad and Terrorism Threat Monitor (JTTM) released a new exclusive report on Amjad, a media company affiliated with Hay’at Tahrir Al-Sham (HTS), that released a video on Nov. 22 featuring the group’s commander Abu Muhammad Al-Joulani and others recounting the events that took place during last year’s battles of Al-Sikkah (“The Railroad”) in the suburbs of Idlib, Syria. In the video, Al-Joulani acknowledged that his group had been deceived in the agreement with the regime to end four months of fighting and vowed that there are thousands of fighters ready to die to protect their territory and liberate more cities. The video also showed exclusive footage of the downing of a fighter jet with Al-Joulani threatening that the mujahideen have “somehow” acquired an “advanced weapon that is able to down fighter jets at any time.”

Praising its fighters for remaining steadfast, an HTS field commander acknowledged that some jihadi factions had joined and fought alongside his group. One of these groups was the Turkestan Islamic Party (TIP). Addressing TIP’s participation in the Al-Sikkah battles alongside HTS, one of the group’s military commanders, identified as Jund Allah Al-Turkestani, said that “religious obligation” was the reason behind the decision to take part in the battles, despite their involvement in several other fronts. “So,” he said, “we moved our vehicles and mobilized all of our men including scholars to take part in the battle.”

A media activist identified as Mohammad Bel’as criticized media and news organization for not covering the battles of Al-Sikkah, saying that this was “intentional.” According to Bel’as, news agencies focused only on the humanitarian aspect and only a small number of journalists came to cover the fighting. Bel’as then condemned those who had taken part in the reconciliation process, saying it is a “betrayal of the revolution and a cancer that should be removed before it spreads to the whole body.” He urged the jihadi factions to unite to counter the agendas of the regime and its allies.

The video also featured a commander, Moustapha Bakkour, in the Al-Izzah army urging all the jihadi and revolutionary factions to strengthen themselves and prepare the ground for the upcoming battle. 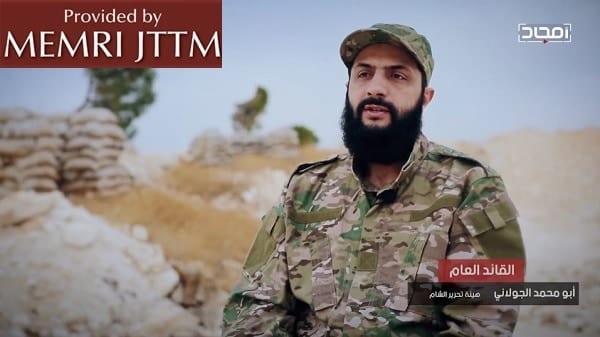 Commenting on the intense airstrikes HTS fighters had witnessed during the fight, a military commander noted that fighter jets would come very close to strike anything that moved. Al-Joulani then announced that the mujahideen had managed to down two Russian fighter jets, which they said had not been downed since World War II, with an “advanced” weapon that the mujahideen had acquired.

He then addressed the Russians, saying that “when their fighter jets strike Muslims, they will be targeted and the mujahideen are able to down them at any time if they get the chance.” The video then showed exclusive footage of a fighter shooting down a fighter jet and people celebrating at the site where the jet hit the ground.

After acknowledging that HTS had been defeated in the battles of Al-Sikkah, with 700 dead and 1,200 more wounded, Al-Joulani stated that the mujahideen had killed and wounded nearly 3,000 regime soldiers and destroyed many pieces of its military equipment. “We have affirmed a glorious concept that will be recorded in history in generations to come that an inch that we have taken over with blood will only be taken from us by blood,” he said. “And that at any battle that the enemy is planning to fight against the mujahideen, it should know that there will be a bill that it should pay and that we sacrifice the most valuable items to defend a stone that we have taken by force and against the will of our enemy. We will sacrifice anything to protect this one stone.”

Al-Joulani then said that the mujahideen have learned a “great lesson” from the battles of Al-Sikkah, which is “confrontation is the right and only option while staying away from the agreements, treaties, and false promises. Most people have realized that they had been deceived in the truce of sharq [east] of Al-Sikkah. Therefore, maybe some will make sure in the near future not to repeat that unpleasant experience… and that if they had taken part in that battle and defend the territory then Al-Ghouta, Homs, and Daraa would not have been taken [by the regime].”

The video concludes with Al-Joulani recognizing those who were killed in the battle of Al-Sikkah and vowing, as the names of hundreds of “martyrs” appears on the screen, that there are thousands of fighters willing to sacrifice themselves to defend the Sunnis and liberate the cities that the regime took from them.