Hizbullah Leader Said There Will Be ‘Decisive’ Retaliation Against US, Bases In Region 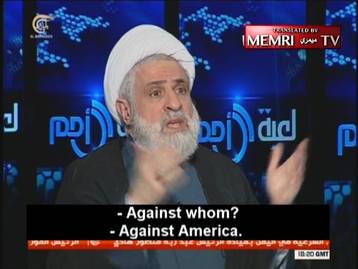 A week before the Trump administration’s “measured” missile strikes on a Syrian government airbase where chemical weapons were stored, Hizbullah Deputy Secretary-General Sheikh Naim Qassem said during an interview on Mayadeen TV that there will be a "decisive" retaliation against the US and its bases in the region in response to any provocation involving Iranian interests in the region.

The US missile strike a week later reputedy was based on intelligence Bashar Hafez Al Assad’s air force bombed civilians with at least sarin gas. Syria, Russia and Iran had previously assured the world all of Al Assad’s military chemical stockpiles had been destroyed.

Monday, an alleged reporter named Nour Ayoub, writing in Al Akhbar, a Lebanese daily close to Hizbullah, accused the US of using the war against ISIS as a pretext to bring its military forces back into Iraq, said the Middle East Media Research Institute (MEMRI), which monitors and tracks jihadi social media and dark web sites. In his article, On the 14th Anniversary of the Invasion, the Americans Are Back in Iraq,” he “then listed names and locations of US military bases in Iraq with a map illustrating their whereabouts,” MEMRI reported.

Ayoub also wrote the US is planning on building two military bases for Special Forces in the Akkaz area near the city of Al Qaim, and in the Al Humayra area near Ramadi. MEMRI said, “The presence of these bases, the writer argued, aims to ‘disconnect Iran from Syria’ by placing Syria in between two military bases in Al Qayyarah and the city of Al Qaim. The writer concluded his article by questioning the role these bases would play after ISIS is defeated.”

Citing an unnamed Iraqi politician, MEMRI added that Ayoub wrote, “We couldn’t believe that we had managed to expel the Americans from our country in 2011. They have left by the door and returned today through the window [pretext] of fighting ISIS.”

MEMRI said, “According to the article, the existence of US bases in Iraq ‘clearly reveals that the US had intended to return to Iraq under the pretext of the war on terror.’”

“After commending the Iraqi militias, which countered the US military presence in Iraq,” MEMRI reported, “Ayoub wrote, ‘In June 2014, and after ISIS captured the city of Mosul, Washington found a glorious opportunity in that incident to return to Iraq. It called for the formation of ‘international coalition forces’ to combat ISIS, and [considered] it necessary to provide military consultation to the collapsing Iraqi army.’”

When Naim Qassem was asked by the host of Mayadeen TV, "What about the Iranian response?" Naim Qassem stated that, “The Iranian response will definitely be decisive. I want to tell you a story that I heard from the Iranian brothers: According to my information, when [former President George W.] Bush threatened Iran, and the plans to strike Iran were ready, the imam and commander Khamenei authorized the military command to launch missiles in the event that certain places came under attack, and to carry out the mission of defense without confirming with him. They were at a very high level of readiness."

"Against whom?" the host asked.

Host: "Only America? Or against countries that host its military bases as well?"

Naim Qassem: "It was America that was making threats … Obviously, I mean America and its bases in the region. What I want to say is that Iran has always rejected any kind of aggression against it, whether from America or anyone else. Iran is ready to retaliate, and they know it, but they do not know the outcome. They can attack [Iran], but what will happen afterwards? What will be the consequences for them?"

Continuing, Naim Qassem said, "Things will not easily deteriorate into a state of war [between Iran and the [US], because Iran is strong and cannot be occupied. The circumstances of Iran, its people, its power, and its status, will not allow America to attack it. This is according to the available information."

Host: "Are you saying that Iran is capable of confronting America and NATO?"

Naim Qassem: "Of course it is capable."

Host: "Or is it capable only of containing them?"