While most terrorist incidents are characterized by the use of the ‘gun and the bomb,’ threat groups are expanding into both low- (e.g. knives and vehicular overruns) and high-end (e.g. weaponized drone and teleoperated static weapons platform) technology use and the tactics, techniques, and procedures supporting it. Further, novel variations on mid-range technology use – such as the armoring of VBIEDs (vehicle borne improvised explosive devices) – are also taking place as is the use of homemade or 3D-printed firearms.

The study and observation of unconventional and advanced technology use by terrorist, insurgent, and other threat groupings lead to such terrorism futures projections and assessments. Years of research and subsequent analysis of terrorist technology and TTPs reveal some trends:

In addition to the technology and TTPs excerpted above, their application in ever-changing combinations – along with more traditional forms of terrorism approaches – can be utilized for attack purposes. Such layering can readily be seen in the employment of a drone for ISR (intelligence, surveillance, and reconnaissance) which took place some months prior to Brenton Tarrant’s Christchurch FPS streaming rampage. It must be ultimately remembered, however, that terrorist technology and TTPs use is a process undertaken in order to achieve disruptive targeting effects (via the generation of terror directed at a government and its population) by means of physically destructive actions and operations serving as a catalyst to achieve the higher order disruptive effects. Hence, as this process becomes more sophisticated and deadly, the expectation is that those disruptive effects will become more pronounced. 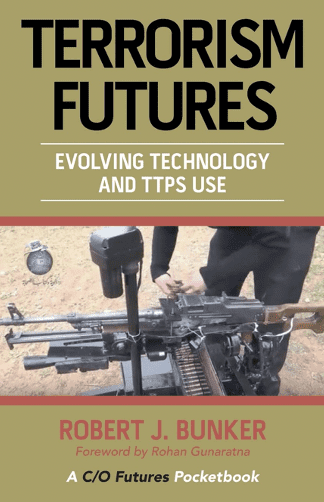 The Terrorism Futures: Evolving Technology and TTPs Use pocketbook (160 pp, $16.99) is derived from a series of nine essays written by the author—then a Non-Resident Counterterrorism Fellow—between December 2014 and June 2017 for TRENDS Research & Advisory, Abu Dhabi, UAE. With subsequent organizational and website changes at TRENDS, a majority of these essays are no longer accessible via the present iteration of that entity’s website. In order to preserve this collection of forward-thinking counterterrorism writings, the author elected to publish them as a C/O Futures pocketbook in October 2020 with the inclusion of new front and back essays, an acronyms listing, an image gallery, curated additional readings, and a foreword by renowned terrorism expert Rohan Gunaratna.

Dr. Robert J. Bunker
Robert J. Bunker is the director of research and analysis of C/O Futures, LLC and a managing partner. An international security and counterterrorism professional, he was Futurist in Residence at the Behavioral Science Unit (BSU) at the Federal Bureau of Investigation Academy in Quantico, VA, Minerva Chair at the Strategic Studies Institute (SSI) of the U.S. Army War College, Carlisle, PA, and has taught at American Military University, California State University San Bernardino, Claremont Graduate University, and the University of Southern California. Dr. Bunker holds degrees in the fields of history, anthropology-geography, social science, behavioral science, government, and political science and has trained extensively in counterterrorism and counternarcotics. He has also delivered hundreds of presentations—including U.S. congressional testimony—with well over 500 publications across various fields and formats. He can be reached at docbunker@cofutures.net, @DocBunker.