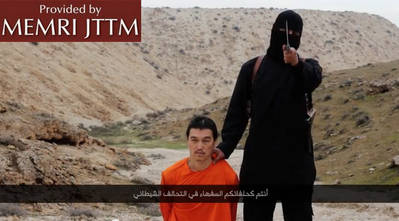 Last Tuesday, ISIS released a 1:50-minute-long audio message in which Jogo appealed for the second time for his release. He said ISIS would execute him if the Jordanian government didn’t release Al Rishawi within 24 hours. Jogo also said if Al Rishawi was not released ISIS would also execute a Jordanian pilot in its custody.

On Saturday, January 24, a 2:52-minute-long video was released by ISIS showing Jogo holding a picture of Haruna Yukawa — the other Japanese prisoner held by ISIS — purportedly showing Yukawa had been beheaded. The video was released only hours after the expiration of the 72-hour ultimatum ISIS had given the Japanese government to pay a $200 million ransom for both Japanese hostages.

In the video released today, Jogo’s executioner tells the Japanese government that just like all the other countries in the US-led anti-ISIS coalition, it has "yet to understand that we, by Allah’s grace, are an Islamic caliphate with authority and power. An entire army thirsty for your blood."

"Because of your [Abe’s] reckless decision to take part in an unwinnable war, this knife will not only slaughter [Jogo], but will also carry on and cause carnage wherever your people are found. So let the nightmare for Japan begin,” Jogo’s executioner said.

The video left unclear the fate of the Jordanianpilot, First Lt. Moaz Al Kasasbeh. Jordan had agreed to release Al Rishawi only if ISIS produced proof that Al Kasasbeh was still alive. He’d been shot down over Syria on December 24 during coalition airstrikes on the Islamic State.

In response, Jordan said today if ISIS beheads Al Kasasbeh, it will execute Al Rishawi, and hinted it also will proceed with executions of other jihadists it has in captivity.

Shortly after the video’s release this morning, Japanese Prime Minister Shinzo Abe said, "The government has tried its best to deal with this matter, but we are deeply saddened by this despicable and horrendous act of terrorism and we denounce it in the strongest terms. To the terrorists, we would never, never forgive them for this act,” stressing Japan will continue fighting terrorism.

On Thursday at the Prime Minister’s Office, Abe convened a meeting of the Ministerial Council on the murder of Yukawa, Abe stated, “Again this morning, an audio message appearing to have been recorded by Mr. Kenji Goto was newly released on the Internet. It is necessary to respond in a thoroughgoing manner by further strengthening our information gathering and analysis, in cooperation with relevant countries.”

“Although the circumstances remain severe, the government of Japan is requesting cooperation from the government of Jordan and other relevant countries to bring about the release of Mr. Goto at the earliest possible time,” he continued. “This policy will remain unchanged going forward. I ask all of you, the ministers responsible for areas relevant to this matter, to continue to dedicate your utmost efforts to securing the release of Mr. Goto, staying constantly vigilant. Moreover, I once again ask you to take all possible measures to fight against terrorism within Japan and ensure the safety of Japanese nationals abroad.”

Today ISIS also released images showing the execution of a man convicted of homosexuality by throwing him off of a tall building, as required under the jihadi group’s interpretation of Islamic law.

“This is the third documented case of ISIS executing homosexuals this way,” said the Middle East Media Research Institute (MEMRI), which monitors jihadi social media sites. “According to shari’a,” MEMRI explained, “a person convicted of engaging in homosexual acts is to be cast off the highest place in town and then stoned to death.”

The images show ISIS first asking the convicted man to repent to Allah, then standing the man on top of a building, throwing him off the edge of the building, and a crowd on the ground stoning his body.

In January, ISIS released equally as horrifying images of Koranic punishment enforcement by throwing two homosexuals off another tall building, crucifixion of thieves and the stoning of a woman. In early December, ISIS also released images of the execution of another convicted homosexual by throwing him off a rooftop and then stoning him.