ISIS: Islamist War on West, Christianity Based on Religious Theology 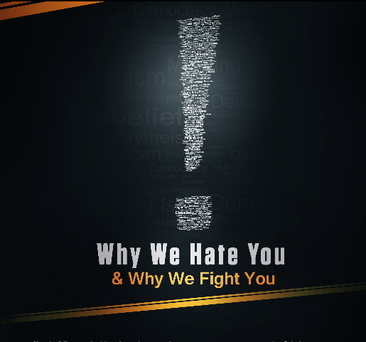 An article in the latest issue of the Islamic State’s (ISIS) English-language magazine, Dabiq, the jihadi organization clearly spelled out its reasons for its “enmity toward the West and explains why it is fighting it, stressing that these reasons are based on theology, not foreign policy,” said the Middle East Media Research Institute (MEMRI).

“The article stresses that the West’s foreign policies are only a secondary reason for hating and fighting it,” MEMRI said.

ISIS very unmistakably said Islamist jihad is a theological war with the West.

“We wage war against you to stop you from spreading your disbelief and debauchery – your secularism and nationalism, your perverted liberal values, your Christianity and atheism – and all the depravity and corruption they entail,” the Dabiq article stated, accompanied by a photo of a jihadist toppling a Christian cross. “You’ve made it your mission to ‘liberate’ Muslim societies; we’ve made it our mission to fight off your influence and protect mankind from your misguided concepts and your deviant way of life.”

The magazine “features a theological polemic with Christianity and atheism, and with the West’s leading values such as liberalism, secularism and leading movements such as feminism, gay-rights and so on. The issue seeks to win over Christian converts as recruits for ISIS, by presenting the personal stories of converts who joined the group and by brining personal appeals from them,” MEMRI said.

“The foreward article mentions the attacks in Orlando, Dhaka, Magnanville, Nice, and Normandy, Würzburg and Ansbac – serve as an introduction to the main theme that runs through the issue: war against Christianity and Western society,” MEMRI said.

ISIS stated it is “important for us to clarify to the West in unequivocal terms – yet again – why we hate you and why we fight you. We hate you, first and foremost, because you are disbelievers; you reject the oneness of Allah  — whether you realize it or not  — by making  partners for Him in worship, you blaspheme  against  Him, claiming that He has a son, you fabricate lies against His prophets and messengers, and you indulge in all manner of devilish practices. It is for this reason that we were commanded to openly declare our hatred for you and our enmity towards you. There has already been for you an excellent example in Abraham and  those with him, when they said to their people, ‘Indeed, we are disassociated from you and from whatever you worship other than  Allah. We have rejected you, and there has arisen, between us and you, enmity and  hatred forever until you believe in Allah alone.’"

“Furthermore,” ISIS stated, “just as your disbelief is the primary reason we hate you, your disbelief is the primary reason we fight you, as we have been commanded to fight the disbelievers until they submit to the authority of Islam, either by becoming Muslims, or by paying jizyah – for those afforded this option – and living in humiliation under the rule of the Muslims. Thus, even if you were to stop fighting us, your best-case scenario in a state of war would be that we would suspend our attacks against you – if we deemed itnecessary – in order to focus on the closer and more immediate threats, before eventually resuming our campaigns against you. Apart from the option of a temporary truce, this is the only likely scenario that would bring you fleeting respite from our attacks.”

“So, in the end, you cannot bring an indefinite halt to our war against you. At most, you could only delay it temporarily,” the jihadi group said.

“We hate you because your secular, liberal societies permit the very thingsthat Allah has prohibited while banning many of the things He has permitted, a matter that doesn’t concern you because you Christian disbelief and paganism separate between religion and state, thereby granting supreme authority to your whims and desires via the legislators you vote into power,” ISIS stated, adding that, “In doing so, you desire to rob Allah of His right to be obeyed and you wish to usurp that right for yourselves … Your secular liberalism has led you to tolerate and even support ‘gay rights,’ to allow alcohol, drugs, fornication, gambling and usury to become widespread, and to encourage the people to mock those who denounce these filthy sins and vices.”

“As such, in the case of the atheist fringe, we hate you and wage war against you because you disbelieve in the existence of your Lord and Creator,” ISIS continued. “You witness the extraordinarily complex makeup of created beings, and the astonishing and inexplicably precise physical laws that govern the entire universe, but insist that they all came about through randomness and that one should be faulted, mocked and ostracized for recognizing that the astonishing signs we witness day after day are the creation of the Wise, All-Knowing Creator and not the result of accidental occurrence … Your disbelief in your Creator further leads you to deny the Day of Judgment, claiming that ‘you only live once.”

Jihadists also hate the West, ISIS said “because of its “crimes against Islam and [we] wage war against you to punish you for your transgressions against our religion. As long as your subjects continue to mock our faith, insult the prophets of Allah – including Noah, Abraham, Moses, Jesus and Muhammad  – burn the Quran, and openly vilify the laws of the Shari’ah, we will continue to retaliate, not with slogans and placards, but with bullets and knives.”

MEMRI said, “The issue’s feature article, Break the Cross, is a lengthy, detailed polemical essay which seeks to disprove the founding principles of Christianity, the Trinity, the birth of Jesus and the crucifixion, the truth of the Bible and so on. The essay follows standard Islamic polemical literature regarding Christianity.”

The 15th issue of Dabiq also featured an article by an unnamed American Christian convert living in ISIS territory who appeals to converts back home to carry out attacks against non-Muslims.

MEMRI said, “The article appeals specifically to converts living in the US, reminding them of their obligation to swear fealty to [self-appointed Islamic State Caliph Abu Bakr] Al Baghdadi now that they have embraced Islam. It also warns them against committing apostasy, which it implies could occur if they listened to misguided Muslim scholars or failed to swear fealty to ISIS. In that regard, the article features an image from Arlington National Cemetery showing the headstone of US Army Captain Humayun Saqib Muazzam Khan, whom the article accuses of apostasy, and warns converts from following in his footsteps. Khan was killed in 2004 while serving in Iraq, and was posthumously awarded the Purple Heart and Bronze Star.”

The article states: "Now that you have found the truth of your Lord and abandoned the misguided paths of Satan, beware of the widespread disease of riddah (apostasy). Would you so quickly be ungrateful of Allah’s guidance by retreating to deviance, even if under the mere guise of Islam? … Remember that Allah did not order you to adhere to any group except that of the single Muslim nation, and … forbade you to divide by making and joining other groups … [and] That one nation is the group following the Quran and the Sunnah, with allegiance to one leader, the Caliph of the Muslims …”