ISIS Kills Japanese Hostage, Demands Release of Female Suicide Bomber for the Other 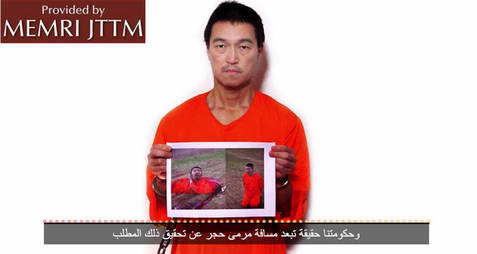 A new 2:52-minute video allegedly released Saturday by the Islamic State (ISIS) hours after the expiration of the 72-hour ultimatum ISIS had given the Japanese government to pay a $200 million ransom for two Japanese hostages or they would be beheaded, apparently shows one of the captives was indeed beheaded.

The video, which the Middle East Media Research Institute (MEMRI) found on the Twitter account of Sahawat News (@Nsahwt), claimed it was an "unofficial [release, either from] Al Furqan [media company] or [from] Al ‘I’tisam [media company]," containing an audio appeal of Kenji Goto Jogo, one of the Japanese nationals held captive by ISIS. It included a still photo of Jogo holding a picture of Haruna Yukawa, the other Japanese prisoner held by ISIS, purportedly showing Yukawa having been beheaded.

On Tuesday, a video clip was uploaded online by ISIS warning the two Japanese citizens would be executed in 72 hours if the Japanese government didn’t pay the $200 millionransom.

“If this is true,” said a statement by the Japanese government at the time, “such an act of blackmailing through holding the innocent lives as hostage is utterly impermissible, and we feel strong indignation. We strongly urge the group not to harm the two Japanese nationals and to release them immediately.”

The statement added that, “Prime Minister Abe’s trip to the Middle East this time is intended to send a message that Japan will actively contribute to the stability of the Middle East region. Japanese assistance, which we have announced andamounts to approximately 200 million USD, is for humanitarian assistance and infrastructure development, and it is non-military in nature. In any case, Japan will not give in to terrorism, and our position of contributing to the counterterrorism efforts by the international community remains unchanged.”

On Wednesday, Abe held a Meeting of the Ministerial Council on ISIS’s warning of executing the two Japanese nationals at the Prime Minister’s Office.

In the video released Saturday, Jogo appeals for his release and said ISIS is demanding release of Sajida Al Rishawi, who is being held in Jordan for conspiring with her husband to detonate suicide vests packed with ball bearings at a wedding reception at the Radisson SAS hotel in Amman, Jordan in November 2005. Rishawi survived the attack because her explosive vest failed to detonate.

The video begins with a message that says Jogo’s recorded message was sent to his family and the Japanese government.

Jogo then purportedly delivers a message in English accompanied by Arabic subtitles. He  confirmed that his Yukawa was "slaughtered in the land of the Islamic Caliphate,” adding that the Japanese government was warned. Therefore, Jogo said, "my captors acted upon their words."

Goto is a freelance journalist who disappeared in October to cover the war in Syria in territory held by the Islamic State trying to free Yukawa, who reportedly was a military contractor who’d disappeared in August.

In the video, Jogo addresses Japanese Prime Minister Shinzo Abe, accussing him of killing Yukawa [by not paying the ransom]. "Abe, you killed Haruna,” Jogo purportedly said. “You did not take the threats of my captors seriously, and you did not act within the 72 hours." He then delivers a message to his wife.

Japan’s Chief Cabinet Secretary Yoshihide Suga said in short statement Sunday that, “A photograph has circulated on the Internet of Mr. Kenji Goto holding photographs of a Japanese national who has been killed, appearing to be Mr. Haruna Yukawa. Such an act is an unpardonable, abhorrent outrage that I strongly condemn. I strongly urge that no harm be inflicted upon the other Japanese national, Mr. Kenji Goto, and that he be released immediately.  I immediately instructed the Deputy Chief Cabinet Secretary for Crisis Management and the Secretary General of the National Security Secretariat to engage in a thoroughgoing response, including gathering information in cooperation with the relevant ministries and agencies. I also intend to convene a Ministerial Council shortly.”

Later Sunday following the meeting of the Ministerial Council, the prime minister stated, "We have been pursuing every possible means including all available diplomatic channels, first and foremost, to save lives of the two Japanese nationals. It is under these circumstances that an image in which Mr. Haruna Yukawa seems to have been murdered, was uploaded online."

"Fully aware of unbearable pain and sorrow that his family must be feeling, I am simply left speechless," Abe said, saying, "Such act of terrorism is outrageous and impermissible, which causes me nothing but strong indignation. Thus I express resolute condemnation."

A’gain, I strongly demand that Mr. Kenji Goto not be harmed and be immediately released," Abe said Sunday, noting that, "The Government of Japan will, in its entirety, do its utmost in order to have him released."

"The Government of Japan will never give in to terrorism, and actively contribute to the peace and stability of the world together with the international community in an unwavering manner," he concluded.