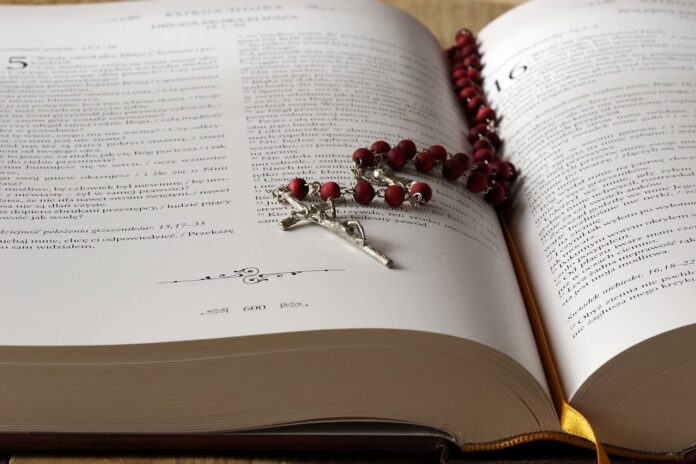 A threat poster that circulated online last week depicted a grenade-wielding jihadist photoshopped into the aisle of a Catholic church in Texas.

The image, in which the jihadist wearing a white T-shirt and tan pants kneels with a rifle, was released by one of the ISIS-supporting media groups that have supplemented the terror group’s deflated yet still-operating media unit.

“We swear, O Cross worshippers, that we will make you suffer the most severe of pains and the most harsh of catastrophes, for a new age is upon us; an age of lions and not one of slaves,” says the text in Arabic and English.

The creator also photoshopped an image of a bloodied body on the steps of the altar. A bloody knife stands pointed into the ground next to the jihadist.

The background image is the interior of St. Mary’s Catholic Church in Fredericksburg, Texas, a historic Gothic painted church first constructed as a log house in 1848.

The photo surfaced within the first few dozen search results when entering “Texas Catholic church” in Google search. A bit of online research often shows that sometimes the “target” shown in ISIS supporters’ threat posters may simply be high up in image search results for broad, relevant keywords instead of an intended attack location. Even if not an intended target by the creator, though, consumers of the propaganda could draw attack inspiration from a depicted target.

ISIS and its supporting media groups have long singled out the Catholic Church in myriad threat posters and videos, with a specific focus on Pope Francis and the Vatican. These threats traditionally escalate around the Christmas season.

CBS Austin reported that the Archdiocese of San Antonio said the threat was determined to not be specific in nature, but out of “an abundance of caution” security was increased for all Mass times.

Threat or Not? Anatomy of a Terror Propaganda Poster