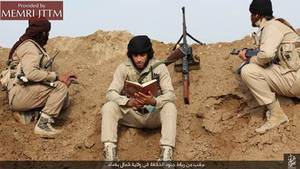 The new year began with a landmark victory over ISIS when Iraqi Security Forces regained control of the key strategic city of Ramadi, the capital of Iraq’s Anbar province. Shortly thereafter, ISIS took to social media and online forums to rationalize the loss of Ramadi and encourage followers in the face of recent setbacks.

ISIS has become notorious for its mastery of social media and online tools as a mechanism for spreading propaganda and recruiting followers. Although the defeat of the jihadist militants at Ramadi represented a major military setback, ISIS continues to wage an effective propaganda battle.

According to the Middle East Media Research Institute (MEMRI), orders from ISIS leadership require jihadis to retain a media blackout regarding active battlefronts. Despite their silence on recent setbacks, ISIS supporters have been calling for an increase in prayers.

For example, on December 30, 2015, an anonymous female ISIS supporter wrote the following flustered message on her Google Plus page: “Omujahideen, do not even think, not one of you, of returning to Syria or Iraq. There is no Syria and no Iraq for you after today.”

She continued, “All you have left is Allah alone, and paradise… Allah is with you, he will give you victory and consolidate you. Beware of thinking negatively of Allah, of weakening your resolution. Do not let sorrow seep into your hearts.”

Furthermore, also on December 29, 2015, the Twitter account of a news channel run by French-speaking ISIS operatives instructed followers: “Media blackout regarding Ramadi. May Allah reward you for communicating ‘official’ information ‘only.’” Another tweet read: “Pray for our lions in #Ramadi. #Prayer is the arm of the believer…”

ISIS supporters did not limit their encouragement to calls for prayers. Others said the defeat at Ramadi was a strategic loss part of a much larger campaign. Shomoukh Al-Islam user Bayareq Al-Dawla posted an article on December 30, 2015 claiming that the loss was a test of faith for the mujahideen.

"Ever since the establishment of a state for the Muslims, they have won and lost battles,” Al-Dawla stated “This is a test for them…”

After downplaying Ramadi, he called on all Muslims to fight to weaken enemies of ISIS, saying, “O Muslims, gather and come since the campaign requires fuel; the fight is only just beginning. Allah will not abandon the Islamic ummah. These enemies will be subdued and defeated. Allah will reign supreme, and will yet enable us to defeat them and take vengeance on them.”

Other supporters urged jihadis not to be disheartened by the loss of Ramadi, since “ISIS is waging a war for religion, not territory.” In an essay published on Shomoukh Al-Islam on December 30, 2015 by the pro-ISIS media group Al-Battar, a writer who calls himself Wamid Qalam emphasized that success cannot be defined in military terms alone, since that battle is not just a physical one.

Qalam said, “If the mujahideen are removed from a piece of land, this does not mean that they lost all land. Every setback is directly linked to the abundance of sins, the lack of mentioning Allah and reliance on human power, while we should devote ourselves entirely in every matter to the power of Allah… O sincere monotheist, you should know that victory does not come for free.”

He continued, “The main battle with the infidels will not stop at land or borders and will not end at a certain city. A sea of blood must flow on earth for the sake of Allah, because this consists following Allah’s command: ‘Fight them until there is no [more] fitna and [until] worship is [acknowledged to be] for Allah’ [Koran 2, 193].”

As the battle against ISIS continues to unfold in the military and ideological battlespaces, countering terrorist propaganda will be critical. As Homeland Security Today previously reported, the new frontline in the war against Islamist terror will require a new approach with a heavy focus on the ideological battle space.

“The proliferation of jihadist propaganda online hasestablished a new front in our battle against Islamist extremists,” Rep. Mike McCaul (R-Texas) told a House Homeland Security Committee hearing last summer. “We are no longer hunting terrorists living in caves who only communicate through couriers. We are facing an enemy whose messages and calls to violence are posted and promoted in real-time.”