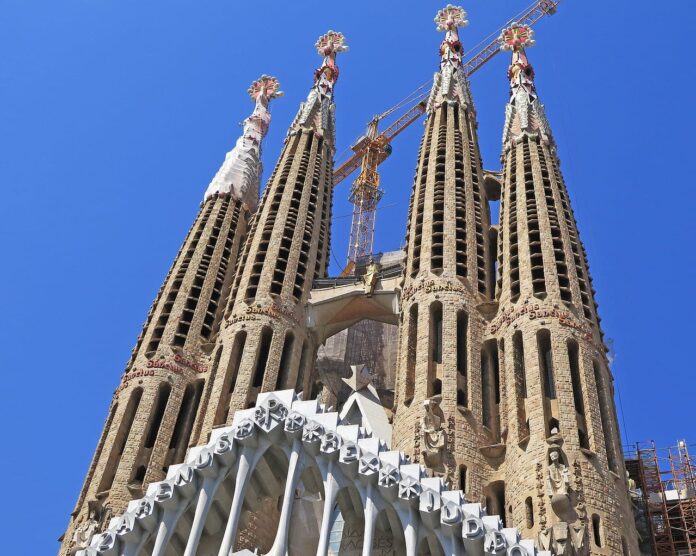 A prolific ISIS-supporting media group that has warned for months of more attacks in Spain issued a threat against a famous Barcelona Catholic church.

The poster circulated online by Muntasir Media includes an image of Sagrada Família and depicts a hooded figure standing outside as pedestrians pass. The only words on the poster are “primer vistazo,” or first glance.

Construction on Sagrada Família began in 1882 and the church just got its first building permit on June 7. Muntasir has previously directed threats at the tourist attraction.

The threat comes a little more than a month after a poster circulated online depicting a grenade-wielding jihadist photoshopped into the aisle of a Catholic church in Texas.

The image, in which the jihadist wearing a white T-shirt and tan pants kneels with a rifle, was likewise released by one of the ISIS-supporting media groups that have supplemented the terror group’s deflated yet still-operating media unit.

“We swear, O Cross worshippers, that we will make you suffer the most severe of pains and the most harsh of catastrophes, for a new age is upon us; an age of lions and not one of slaves,” said the text in Arabic and English.

The creator also photoshopped an image of a bloodied body on the steps of the altar. A bloody knife stood pointed into the ground next to the jihadist.

The background image is the interior of St. Mary’s Catholic Church in Fredericksburg, Texas, a historic Gothic painted church first constructed as a log house in 1848.

ISIS and its supporting media groups have long singled out the Catholic Church in myriad threat posters and videos, with a specific focus on Pope Francis and the Vatican. These threats traditionally escalate around the Christmas season.

Earlier this month, Muntasir Media issued a French-language threat bearing a picture of the Eiffel Tower and calling on supporters to kill police. Last month, Muntasir posted a call for would-be jihadists to make a pilgrimage to join ISIS — not in Syria or Iraq, but Nigeria.

In April, Muntasir responded to the Sri Lanka Easter bombings by distributing an online poster showing a scene of the carnage with the message “Happy Easter to the Christians, traitors of Jesus (‘Alehi Asalam): Here is your reward.” That same month, the group released an image lauding in French the fire at Cathédrale Notre-Dame.

In mid-December, a six-minute video showing scenes from the Las Ramblas attack and distributed by Muntasir declared that “the cells are ready” to strike “designated” targets again. Younes Abouyaaqoub, who struck pedestrians with a rented van in the 2017 attack, was lauded as “the hero of Barcelona” and shown escaping the scene.

Late last year, an image circulated online by ISIS supporters showed a shadowy image of a person shot in the head with the message “Muy pronto en Barcelona [Soon in Barcelona] — you will taste terror in your countries.”