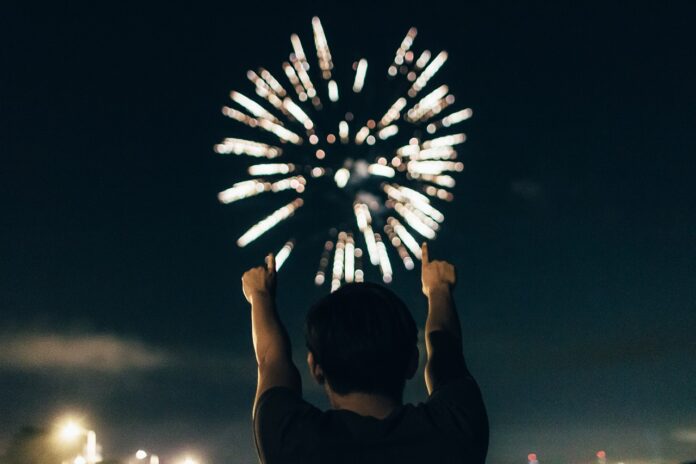 ISIS supporters have featured New York and Washington in threat propaganda leading up to the Fourth of July — which is not just our Independence Day, but a key caliphate anniversary — that has also included aviation threats.

One threat image spread online in recent days depicts jihadists watching a fiery plane crash and another from non-official ISIS media channel Maqdisi included the image of a plane in a vow to “soon” attack “the doors of Europe.”

Another image from al-Irbaad Media Foundation shows a U.S. soldier fleeing down a New York street away from the Manhattan Bridge. Al-Irbaad was founded in December, calling on the “knights of media and the lions of information, graphic designers, producers, and writer alike” to join and “intensify their efforts” to wage war from “both a military and a media point of view.”

“Know O Crusader infidel that you — Allah willing — will soon be pursued in your own homeland,” said the New York image. “You will be pursued in the streets and in the alleyways and you will burn by the flames of the IEDs; only this time you will be feeling the pain of what you have inflicted for decades upon the Muslims, of killing, burning, destruction, and displacement in refugee camps. What is coming will — Allah willing — be directed at you, and in your own homeland. So be on the lookout until then.”

An earlier image distributed in mid-June depicted a jihadist with a bag in his hand and RPG perched on his shoulder standing in front of a burning White House. Maqdisi also disseminated an image depicting President Trump kneeling in an orange jumpsuit in front of a masked jihadist, vowing “we will spare no effort in terrorizing your masses.”

Today a document circulated among ISIS supporters stressing that their “war” is three-pronged: physical, ideological and psychological. Another poster distributed online wordlessly depicted a jihadist driving a car rigged with explosives down a nondescript tree-lined road.

And while it’s far from extraordinary for law enforcement to receive federal cautions about keeping an eye on large public gatherings on national holidays, police departments have been alerted to potential — not specific — threats posed by domestic extremists as well as adherents of ISIS or al-Qaeda.

Regardless of the ideology of the terrorist, they “likely would use simplistic tactics and relatively easily obtainable weapons such as firearms, knives, and vehicles — although some violent extremists have historically sought to use explosive devices.”

“The FBI, DHS, and NCTC remain concerned that [they] could target upcoming Independence Day celebrations, gatherings, or parades, though we are unaware of any current plots specifically targeting such events,” stated the bulletin, obtained by ABC News. “We note that attacks can occur with little to no warning because of the frequently lower levels of security around civilian targets, challenges in securing large crowds, and calls for attacks against soft targets.”

The Fourth does have significance to ISIS: July 4, 2014, was the day when leader Abu Bakr al-Baghdadi climbed the pulpit at the al-Nuri mosque in Mosul for his first video, declaring himself caliph and rallying support for the new Islamic State.

And July 4 plots have been thwarted before: Last year, Demetrius Pitts was arrested and charged with planning to attack Independence Day festivities in Cleveland on behalf of al-Qaeda. “I’m trying to figure out something that would shake them up on the 4th of July,” he allegedly told an undercover FBI employee, according to the Justice Department. “What would hit them at their core? Blow up in the, have a bomb blow up in the 4th of July parade.”

The online army of ISIS supporters – from lone keyboard jihadists to unofficial media groups that whip up a steady stream of propaganda for the terror group – traditionally latch onto holidays to encourage attacks in simple PR posters that are distributed online and posted on ISIS Telegram channels alongside standard propaganda fare of videos and nasheeds.

Though these online threats may not reflect active threats, a graphic designer with sympathies for ISIS yet no personal attack plan in the works can easily cook up a threat poster with a randomly chosen picture for the target, and it can be viewed by an impressionable resident of that city who may glean inspiration for an attack. This propaganda has repeatedly highlighted crowded areas such as parades, political gatherings, festivals and concerts as potential attack targets.

This past fall, there was a rash of online threat posters issued by ISIS-supporting media groups threatening non-specific concert venues. The first week of October, with timing possibly meant to coincide with the one-year anniversary of the Las Vegas massacre, a poster from Remah Media Production depicted a man blending into a concert crowd while wielding a large knife, warning, “Wait for our surprises.” This was preceded by a threat from prolific Al-Abd Al-Faqir Media depicting a grenade-wielding jihadist in a concert crowd, and followed by an online poster from Muharir al-Ansar depicting a cleaver-wielding jihadist at a concert and calling on Muslims in “Europe, America, Russia, Australia and elsewhere” to wage attacks.

More recently, ISIS provinces have been renewing their vows of allegiance to self-proclaimed caliph al-Baghdadi in online videos, including jihadists in West Africa, the Sinai peninsula, the Caucasus and the Philippines. ISIS titled the series, intended to underscore their global reach in the days after the fall of their caliphate in Iraq and Syria, “And the Best Outcome is for the Righteous.” The New York threat from Al-Irbaad begins and ends with this phrase.

In a mid-June ISIS West Africa video, a jihadist identified as Abu Salmah al-Mangawi says terrorists are highly motivated after ISIS defeats in Iraq and Syria to spread their objectives “throughout the entire world.” The Russian jihadists in the Caucasus video branded ISIS’ territorial challenges as a test from Allah that would cleanse the jihadist ranks from dead weight and leave them stronger going forward.

In domestic extremist threats, a neo-Nazi group that stepped up its recruitment after the August 2017 “Unite the Right” white nationalist rally in Charlottesville, Va., resurfaced online in May to show camouflage-clad adherents conducting rifle drills and practicing hand-to-hand combat in scenes reminiscent of stylized ISIS videos.

The Atomwaffen Division recruitment video “Accelerating Vengeance!” showed a member with a torch and a bottle of lighter fluid setting aflame flags that others set in a pile: the flag of Israel, the United Nations flag, the Gadsden flag, a rainbow LGBT pride flag, a Black Lives Matter flag and a Blue Lives Matter flag.

The Department of Homeland Security’s Cybersecurity and Infrastructure Security Agency updated its “Security of Soft Targets and Crowded Places—Resource Guide” in April to reflect recent attacks and help prepare stakeholders for a breadth of threats ranging from bombings or active shooters to drones. Download the guide here.