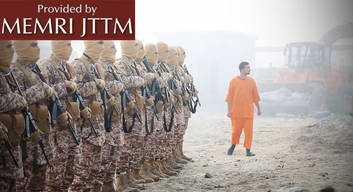 A highly sophisticated and technically produced video, "Healing of the Believers’ Chest," was released Tuesday by the Islamic State (ISIS) showing Jordanian pilot Mu’adh Al Kasasibah – who’d been shot down and captured by ISIS during coalition airstrikes — being burned alive while trapped inside a small metal cage.

Al Kasasibah was captured in December 2014 after his plane crashed in Syria while flying a mission for the anti-ISIS coalition. Shortly thereafter, he appeared in an ISIS interview where he expressed concern for his life. In January, ISIS released two videos showing Muslims who called for Al Kasasibah’s execution.

The reaction by ISIS jihadi supporters who took to social media to praise the barbaric execution of the “apostate” Jordanian pilot urged even more ferocious executions of infidels and apostates.

The 22:34-minute-long video released by ISIS’ media company Al Furqan on the Twitter account @O111492 ends with ISIS offering "100 golden Dinars" for any Muslims in Jordan who kill Jordanian pilots whose names, pictures and hometowns are shown.

According to the Middle East Media Research Institute (MEMRI), which monitors jihadist social media sites, said, “The video begins by listing Jordan’s crimes against Islam and Muslim and its collaboration throughout the years with the West, namely in its fight against Muslims. In that regard, the video notes Jordan’s decision to join the anti-ISIS coalition and its decision to send a number of its pilots to attack ISIS targets.”

The video includes an interview with AlKasasibah in which he detailed his mission during which he was captured by ISIS. He also confirmed that shortly after entering Al Raqqa’s air space, his fighter jet sustained a hit by one of the anti-aircraft weapons on the ground and that he was captured by jihadists. Al Kasasibah then detailed aspects of his and other pilots’ and the coalition’s campaign against ISIS.

He noted, for example, “the countries participating in the coalition, naming in particular the Arab countries and their role in attacking ISIS,” MEMRI said. “Al Kasasibah names the UEA, Saudi Arabia, Kuwait, Qatar, Oman, Bahrain and Morocco.” He “also notes the name and location of the various airports used in the areal campaign against ISIS.”

In addressing the Jordanian people, Al Kasasibah urged them to question Jordan’s claim of being a defender of Islam and asked them why Jordan is not bombing the Jews and the Syrian regime instead.

"Know that our government is an agent of the Zionists," he said in the video. He urged families of other pilots not to send their children on missions whose goal is targeting other Muslims. Doing so, Al Kasasibah said, will ensure that "what happened to me doesn’t happen to your sons."

The final section of the video shows the ISIS’s horrific execution for Al Kasasibah’s crimes against Islam. Wearing an orange shirt and pants, Al Kasasibah is seen walking from around ruins ISIS said were buildings targeted by coalition airstrikes. The video shows footage of dead people and bodies trapped under the ruins. Al Kasasibah is then seen surrounded by a number of masked ISIS jihadi fighters. Next, he’s shown standing inside a metal cage awaiting his execution. A masked ISIS man lights a torch and ignites from a distance a trail of a combustible substance leading to the cage. What comes next is the grissly video of Al Kasasibah being engulfed in flames – concluding when his burned body falls to the ground. A truck carrying a large quantity of rubble is then dumped over the cage and Al Kasasibah body.

Because of the studio-quality production of the video, experts said it had to have taken considerable time to film and edit. Jordan said Tuesday after the video was released that they believe Al Kasasibah was actually executed shortly after he was captured, probably on January 3.