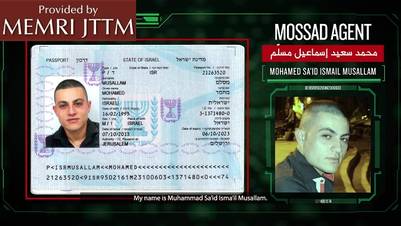 The Islamic State’s (ISIS) Al Furqan media company Tuesday released a video reputedly showing the execution of Mohamed Sa’id Ismail Musallam, an alleged "Mossad spy" captured by ISIS whom ISIS published an interview with in its English-language magazine Dabiq, which was made public on February 12, 2015.

This was the 7th issue of the Islamic State’s English-language magazine. The 83-page issue celebrated the attacks in Paris on the offices of Charlie Hebdo and justified the burning of a captured Jordanian pilot Homeland Security Today reported on at the time. The magazine also called for Muslims in the West to join ISIS to engage in jihad against the West, as have nearly all messages from ISIS, Al Qaeda and other Islamist jihadi groups.

The first half of the 13 minute video, And Wretched Is That Which They Purchased, includes a video version of an interview with Musallam that was published in Dabiq magazine. Musallam tells the story of being recruited by the Mossad, the training he received, his journey to Syria to spy on ISIS and ends with his arrest by the group shortly thereafter, according to the Middle East Media Research Institute (MEMRI) which monitors jihadi social media sites.

“The second part shows the execution of Musallam, who is seen accompanied by two ISIS fighters, a French-speaking man and a young boy,” MEMRI said. “The man delivers a message in which he praises the France terrorist attack against the kosher supermarket [that coincided with the Al Qaeda attack on Charlie Hebdo offices]. He also threatens that soon ISIS will be attacking the Jews’ ‘lands and fortresses.’"

The young boy is shown executing Musallam by shooting him in the face, after which the young boy fires several additional shots into Musallam’s body.

The last part of the video includes the names and pictures of alleged Mossad agents in Jerusalem who are tied with Musallam, including his father and brother.

The man narrating the video “also says that ISIS will ‘liberate Jerusalem’ from the Jews’ ‘filth,’” MEMRI said.

Below are excerpts from the French-speaking ISIS supporter’s message:

"O Jews, indeed Allah has gifted us with killing your followers in your own stronghold in France. As for here in the Islamic State, here are the young lions of the Khilafah. They will kill the one sent by the foolish Mossad to spy on the secrets of the mujahideen and the Muslims …

"As for the near-term, you will witness the legions of the Khilafa pounding your lands and your fortresses. They will liberate Jerusalem from your filth, by Allah’s permission …

"O Jews, indeed the one who handed you Jerusalem said, ‘The Crusade is over.’ But today we say to you, the Islamic conquests have begun, and the Jews have become frightened because the promise is near.

"O supporters of the Islamic State… we’ve revealed to you some of the names and pictures of the spies in Jerusalem, so make those who recruited them see their blood flow… so that you attain the pleasure of Allah the Exalted, and success in the Hereafter …”

The 83-page issue of Dabiq celebrated the attacks in Paris and justified the burning of the Jordanian pilot. It also called for Muslims in the West to join ISIS. It also included interviews with Hayat Boumeddiene, the wife of Paris kosher supermarket attacker Amedy Coulibaly, and with Belgian ISIS fighter Abdelhamid Abaaoud, the leader of the Verviers cell that planned major attacks in Belgium.

The issue opened with a foreword that addressed the killings of the two Japanese hostages, and asserted that the Japanese government and Prime Minister Shinzo Abe were responsible for their deaths because they took sides in the war against ISIS instead of staying out of it, and therefore ISIS punished Japan for its intervention.

Another article justifies and glorifies the burning of the Jordanian pilot, Homeland Security Today earlier reported on. It stated that "the Islamic State resolved to burn him alive as retribution for his crimes against Islam and the Muslims, including his active involvement  in  crusader  airstrikes against Muslim lands." It added that, "in burning the crusader pilot alive and burying him  under a pile of debris,  the Islamic  State carried out a just  form  of  retaliation  for  his involvement in the crusader bombing campaign." Referring to Jordan’s execution of two jihadis, Sajida Al-Rishawi and Ziad Al-Karbuli, in retaliation for this act, the article explains that ISIS attempted to secure their release but "Allah had decreed that they would return to him as shuhada [martyrs]."

The issue also featured an interview with Abdelhamid Abaaoud, aka Abu Umar Al Baljiki, the leader of the ISIS cell which planned attacks in Belgium and was the target of the Belgian authority’s January 15, 2015 raid in Verviers. In the interview, Abaaoud tells how he traveled from Syria to Belgium with the intent of carrying out terrorism there, and how he avoided being caught in the raid and managed to return to Syria despite being wanted by security and intelligence apparatuses, and despite the fact his name and photo appeared in the media. He also talked about his co-conspirators, Belgian ISIS members Khalid Ben Larbi (aka Abu Zubair Al Baljiki) and Sufian Amghar (aka Abu Khalid Al Baljiki), who traveled with him to Belgium and were killed in the shootout with the security forces.

Not surprisingly, the issue dealt at length with the January 2015 attacks in Paris.

“As part of this,” MEMRI said, “it featured an interview with Hayat Boumeddiene, the wife of kosher supermarket attacker Amedy Coulibaly (aka Abu Basir Al Ifriqi), who fled to Syria prior to the attack. Boumeddiene, referred to as Umm Basir Al Muhajirah, discussed her successful escape to the Islamic State and her late husband’s devotion to ISIS’s ideology. Another piece, titled, The Good Example of Abu Basir Al Ifriqi, stressed Coulibaly’s piety and devotion to Islam. The piece includes an interview with one of Coulibaly’s associates, who praises his generosity and the good deeds he did during his life, such as preaching Islam and financially assisting the Kouachi brothers, perpetrators of the Charie Hebdo attack.”

The issue’s feature article, The Extinction of the Grayzone, said the world is now clearly divided into two camps – the camp of Islam, represented by ISIS, and the camp of unbelief – and Muslims in the West must therefore choose whether to join ISIS or side with its enemies.

“The article, which is accompanied by photos of Muslim leaders in the West, exhorts the West’s Muslims to renounce ‘apostate’ and ‘traitor’ Muslim leaders and institutions, such as clerics who spoke out against the Paris attacks,” MEMRI reported. “It also urges them to attack those who mock Islam’s prophet, and even insinuates that moderate Muslims should be killed. While glorifying various attacks carried out in Europe, such as the Madrid and London bombings, it also stresses that, after the establishment of the Islamic State’s caliphate, Muslims in the West no longer have an excuse to stay in the West. Rather, they must leave their countries and come to the territories controlled by ISIS.”