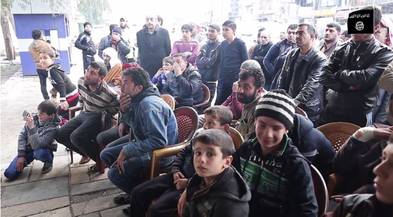 The Islamic State (ISIS) announced Friday it is providing screenings of a 5-minute video, "Muslim Rejoicing over the Jordanian Pilot’s Punishment,” in Iraq’s Ninawa province.

Last week, ISIS released a video of Jordanian pilot Mu’adh Al Kasasibah – who’d been shot down and captured by ISIS during coalition airstrikes — being burned alive while trapped inside a small metal cage.

Photos accompanying the announcement — which was posted on the Twitter account of ISIS media operative Abu Muhammad Al Fateh (@AlFataih4) — “shows children and adults watching the video of the burning of Jordanian pilot Mu’adh Al Kasasbeh on giant screens set up in public places,” according to the Middle East Media Research Institute (MEMRI), which monitors jihadi social media sites.

MEMRI said the video “also shows ISIS members distributing DVDs to the public, apparently of the same film … included in the video are street interviews with adults and children who express their opinion on the pilot’s sentence. All of them say the punishment was justified because the pilot came to bomb innocent Muslims, and some even claim that he got off too lightly. Some interviewees emphasized Jordanians deserve to be slaughtered and killed for their country’s participation in the anti-ISIS coalition.”

“This punishment of burning was lenient compared to what he deserved, [which is] slaughter!” one child said in the video, adding, “Allah willing, we will yet get to slaughter them [the Jordanians and the coalition forces]. Why didn’t he [the pilot] go fight the Jews?! They are coming and bombing the M

"You ask me about the burning?! I tell you that [he deserved] not only burning but to have his fingers chopped off,” and unidentified adult male said. “And what of the fact that they burn the Muslims’ children?! The [pilot’s] father appears on television and calls to bomb the Islamic State. Why didn’t you [the pilot’s father] ask your son why he bombs and burns the Muslims’ children?! Why do you people get angry when we burn one person, [but] not when you burn thousands …? Are you incapable of thinking?! Don’t you tell you yourselves that they brought the apostates with the crusaders and formed a coalition against Muslims?! Is that not enough?! What do you want?! Burning was too easy a punishment for him. I am very happy they burned him. I was overjoyed, although he deserved a worse punishment than burning. Allah willing, any pilot who reaches us, we will capture him and burn him."

Another man said, "Of course the Jordanians deserve that we kill, slaughter and burn them. We didn’t do anything to them, but [the pilot] arrived in his plane from Jordan, bombed our children, our elderly, our wives and parents."

The Islamic State’s General Security Bureau issued a communiqué on February 4 announcing ISIS is offering a reward to anyone killing or wounding a Jordanian pilot and thereby preventing him from taking part in airstrikes against the Islamic State.