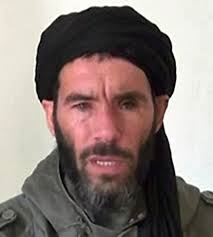 Mokhtar Belmokhtar, commander of the Al Qaeda-linked jihad group Al Murabitun — which operates in southern Algeria and North Mali — Friday issued a communiqué in which he praised the brothers who attacked the offices of Charlie Hebdo in Paris, calling them "valiant fighters."

“He also promised that the attacks against France will continue as long as it continues fighting the Muslim ummah and refuses to withdraw from the territories it has invaded,” said a translation by the Middle East Media Research Institute (MEMRI), which monitors jihadi social media.

MEMRI said, “The communiqué was apparently issued immediately after the attack and before the subsequent events (the manhunt for Said Kouachi and Cherif Kouachi and the attack on the kosher supermarket by Amedy Coulibaly). It is signed with Belmokhtar’s alias, Khaled Abu Al ‘Abas, and was posted on the jihadi forum Shumoukh Al Islam.”

Also on January 9, Al Qaeda in the Arabian Peninsula (AQAP) and ISIS social media claimed both groups were involved in the Paris Attacks. The "Bakhsarof Al Yaman" Twitter account @ba_yman, which is associated with AQAP and used to post official messages by the jihadi organization on jihadi forums, posted a series of tweets about the Charlie Hebdo attack in Paris, MEMRI disclosed.

Meanwhile, in a video filmed before the Paris supermarket attack by Amedy Coulibaly – who was tiedto the known jihadi Kouachi brothers killed Friday afternoon in a violent shootout with French counterterrorism forces at a printing plant in Dammartin-en-Goele northeast of Paris — pledged allegiance to ISIS and justified his actions.

The two jihadi groups’ apparent ties to all of the jihadists involved in the Paris attacks raises questions about just how intertwined the two Islamist organizations are, Homeland Security Today earlier reported.

Also on Friday, AQAP released a five-minute audio recording, "A Word About The Blessed Raid In Paris," by its chief cleric Sheikh Harith Al Nadhari, in which he congratulated the jihadis who attacked the Paris office of Charlie Hebdo as "heroes” and implied AQAP was behind the attack.

MEMRI said Belmokhtar stated, “France uses everyfraudulent means and every tool of destruction to fight the mujahideen, and treats Muslim lands as though they are no-man’s-land. It has ‘made a pact with the global forces of evil to fight the shari’a and its believers, from Afghanistan in the east to the lands of the Islamic Maghreb in the west.’ As part of this it raided the Azawad region in northern Mali in order to topple the local sharia rule under the pretext of a ‘war on terror.’”

“Belmokhtar added that France made a mistake in thinking that it was out of the reach of the mujahideen,” MEMRI said. “He said that this country and its press have always insisted on harming Islam and the Prophet Muhammad, and that Allah directed the Muslims, ‘So whoever has assaulted you, then assault him [in the same way] that he has assaulted you.’”

Belmokhtar then praised the jihadi attackers of Charlie Hebdo, calling them elite soldiers of Islam who displayed determination, sacrifice and rare heroism, and who managed to hit France and its despicable and pitiful soldiers in their very home, in the heart of the French capital before the eyes of the French army and intelligence services.

“Mokhtar claims that the two chose their targets carefully and spared innocent Frenchmen despite the complexity of the action, which demonstrates that they were moral and honorable. Addressing all Muslims in Western countries,  and he urges them to take an example from this action, noting that attacks of this kind are bound to shock the Western peoples and cause them to understand the magnitude of the suffering of the oppressed Muslims throughout the lands of Islam,” MEMRI said.

Leveling a direct threat at France, he declared, "We say to France and its criminal president: you are going to be killed and you will not vanquish the ummah whose religion is the religion of Islam. These actions will not cease, with the help of Allah and his power. The hands of our fighters will reach you and will reach all your interests and shopping centers, until you quit our land and our home. As our Sheikh Osama [bin Laden] said, ‘as you kill so you shall be killed. As you damage our security so will we damage your security. The one who started is the one who committed the greater iniquity [and will therefore be punished].’”