Living with Terrorism in the US: How Americans Are Adapting, New Survey Finds 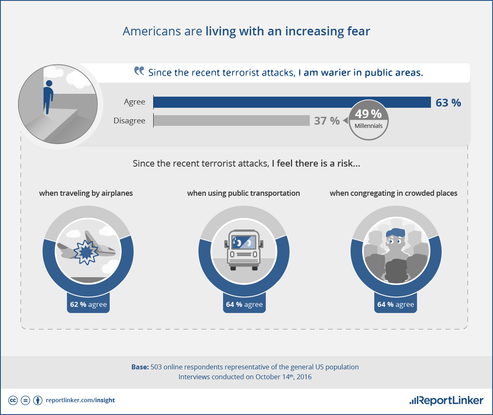 "When Americans go to the polls to choose a new president on November 8, they will be choosing the candidate they believe has the best approach to dealing with terrorism," according to ReportLinker Insight Managing Director Nicolas Bombourg regarding a new survey his firm conducted on how Americans are adapting their life to the threat of terrorism.

The questions that were asked were: What are the social and psychological effects of terrorism on the US population, and, how does it change choices concerning outings or transport?

This survey conducted by ReportLinker reached 503 online respondents representative of the US population, aged above 18 years old. Interviews were conducted on October, 14th.

The ReportLinker announcement said, “One reason it has become such a large factor in this election is that terrorism tears at the essential fabric of American life: the freedom to pursue life, liberty and happiness. But another reason is that recent attacks have pushed the issue to the forefront of everyday living.”

“For example,” ReportLinker stated, “the latest wave of terrorist attacks – Boston, San Bernandino, Orlando – have made Americans warier while out in public, especially in crowded places. Sixty-four percent say they’re more anxious when congregating in a public area or riding on public transportation, according to the ReportLinker survey. “And 62 percent say they believe air travel is risky, despite a stronger security process put into place after 9/11.”

ReportLinker stated, “These feelings are more pronounced among older Americans, 25 percent of whom say they are warier now while in public places. By contrast, 32 percent of Millennials say they’re somewhat less likely to be worried about terrorist threats if they’re in crowded locations. Since the recent terrorist attacks, Americans are living with an increasing fear.”

Bombourg told Homeland Security Today, “I would say that even if some security decisions have been promoted by the government (especially concerning airplanes), Americans are still not confident concerning their own security and are not believing the government is taking all the measures to protect them. Still shocked with the recent terrorist attacks and the large media coverage, they constantly feel a threat and try then to find some individual solutions, including protecting themselves with a gun. This behavior of self-defense is really dividing the US population and is on the forefront of debates in an era of presidential elections.”

“Terrorism is a worldwide concern,” Bombourg said, noting, “Even though on the field, they are losing strength, and losing territories, it seems they have reached one objective: a psychological war of terror."

Two-thirds of respondents to the ReportLinker survey said their decision will be influenced by the candidates’ plans to combat terrorism. Republicans (78 percent) and older generations (70 percent) are more likely than Millennials (54 percent) to say this issue will impact their choice of candidate.

According to the ReportLinker survey, anxiety over terrorism “seems to have been translated into a willingness to act. Despite their wariness – or perhaps because of it – two-thirds of Americans said they would notify authorities if they spotted something suspicious. Interestingly, Millennials, perhaps because they are somewhat less wary, are less likely than other generations to speak up.”