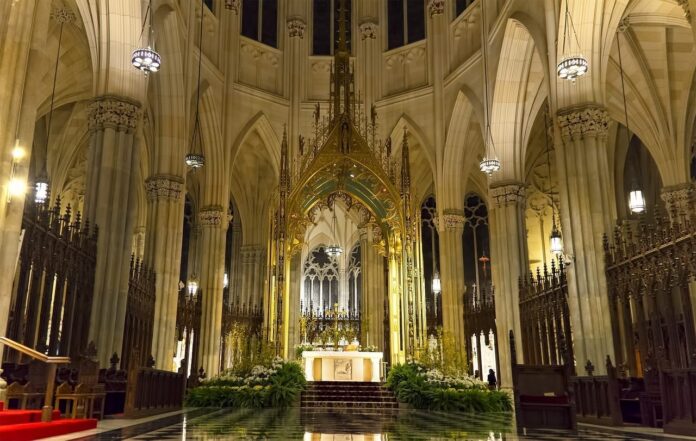 A man was apprehended tonight and being questioned after trying to carry cans of gas, bottles of lighter fluid and lighters into St. Patrick’s Cathedral, according to New York police.

The New York Police Department noted on a Twitter that officers were investigating an incident at the landmark church, which dates back to 1878.

The New York Archdiocese told ABC News: “The individual was stopped as he tried to come into the cathedral. Was turned over to the police. Nothing happened inside the cathedral. Any further info has to come from the NYPD.”

NYPD Deputy Commissioner of Intelligence & Counterterrorism John Miller told reporters at a late-night press conference that a man parked a minivan near the church and “left the car there for some time, walked around the area,” returned at 7:55 p.m. and took out two gallon gas cans, a plastic bag with two bottles of lighter fluid, “the type of which you would use to light a charcoal grill or a barbecue,” and two butane lighters before entering the cathedral.

As he entered the church he was confronted by a cathedral security officer, Miller said, “who asked him where he’s going, informed him he can’t proceed into the cathedral carrying these things.” At that point, he said, some gasoline “spilled out onto the floor.”

The security guard notified two NYPD counterterrorism officers who were outside the church; they caught with the man as he was walking away from the cathedral.

“His answers were inconsistent and evasive, although he remained conversational with them and cooperative,” Miller said. “His basic story was that he was cutting through the cathedral to get to Madison Avenue, that his car had run out of gas. We took a look at the vehicle; it was not out of gas. And at that point he was taken into custody.”

Are New York Businesses Ready for the Next Terror Attack?

Miller praised “very good work” by the St. Patrick’s Cathedral security guard and the NYPD. There were people inside the church at the time of the incident.

“It’s hard to say exactly what his intentions were, but I think the totality of circumstances of an individual walking into an iconic location like St. Patrick’s Cathedral carrying over four gallons of gasoline, two bottles of lighter fluid and lighters is something that we would have great concern over. His story is not consistent. So he is in conversation with detectives right now.”

Miller said the suspect “is known to police and we are looking into his background.” He said the man’s identity wouldn’t be released until he’s charged with a crime.

The incident comes days after a blaze at Notre Dame in Paris — authorities are still investigating the cause, as renovation crews were working on the cathedral at the time, but do not suspect arson or terrorism — and a month after the Department of Homeland Security warned religious institutions of “an uncertain threat environment that reaches even into the most holy of places.”

“I think if you add to that the events with the fire in the iconic location of Notre Dame this week, and all the publicity around that — this is a location where we always have heightened security. That is normal,” Miller said. “We’ve added to that in recent days. And I think this is an indicator of something that would be very suspicious.”

Around 7:55pm, a man walked into St. Patrick’s Cathedral in Manhattan with gas cans and lighter fluid, and was subsequently apprehended by @NYPDCT without incident. We thank our partners for their help, and remember – if you see something, say something. pic.twitter.com/qEbmklnqzQ