Islamist extremist propaganda and white supremacist propaganda not only reflect similar themes and memes in the ways they recruit and incite, but pose the shared danger of reeling in followers and potentially driving them to violent acts.

Terror attacks are increasingly hybrid, and so are the attackers — extremists are feeding off each other’s best practices. The web is a terror marketplace where a group speaks not only to its own adherents and an individual doesn’t just shout into the void when posting bomb-making techniques or target suggestions, but they all contribute to an ample open-source library of D.I.Y. extremist training and incitement that crosses group allegiances and ideologies.

White supremacist groups and purveyors of racism and anti-Semitism have found an online base for incitement and recruitment much like ISIS honed the medium to further their goals of building ranks and inspiring lone terrorists. Domestic extremists are also posting memes and metal-soundtrack training-camp videos that echo the stylized violence and call to arms used with devastating effect by ISIS and al-Qaeda.

It’s critical to understand the shared characteristics and in some cases even mimicking of extremist messaging. As we’ve spent years battling and formulating counternarrative strategies to Islamist terror recruitment and incitement, there are lessons to apply as white supremacists utilize some of the same recruitment methods, social media strategy, and tactics tailored to their own cause. 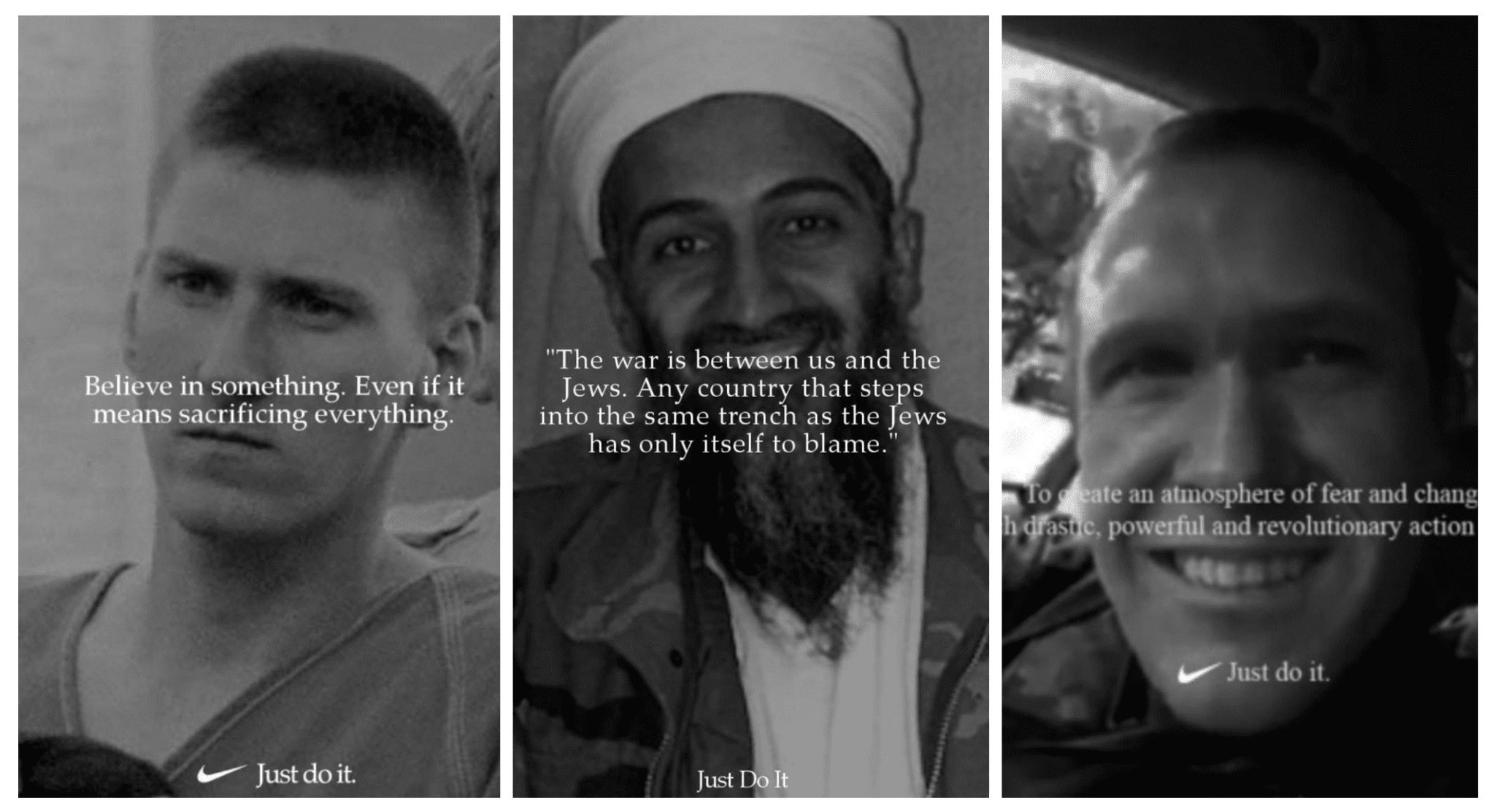 Last summer, a meme circulated using the text for Nike’s Colin Kaepernick ad — “Believe in something, even if it means sacrificing everything” — along with the shoe company’s trademark swoosh and slogan “Just do it.” Instead of the former San Francisco 49ers quarterback, though, the photo was of Timothy McVeigh, the anti-government extremist and domestic terrorist who was executed in 2001 for killing 168 people in the April 19, 1995, bombing of the Alfred P. Murrah Federal Building in Oklahoma City.

McVeigh wouldn’t be the only terrorist to be associated with the “Just do it” meme last summer by online propagandists hoping to spur extremists into violent action. Another featured late al-Qaeda leader Osama bin Laden with his quote, “The war is between us and the Jews. Any country that steps into the same trench as the Jews has only itself to blame.” This was followed by, “Just do it.” And yet another Nike-themed meme featured Christchurch mosque shooter Brenton Tarrant and an “accelerationist” line from his lengthy manifesto, in which he stated his attack was intended “to create an atmosphere of fear and change in which drastic, powerful and revolutionary action can occur.” 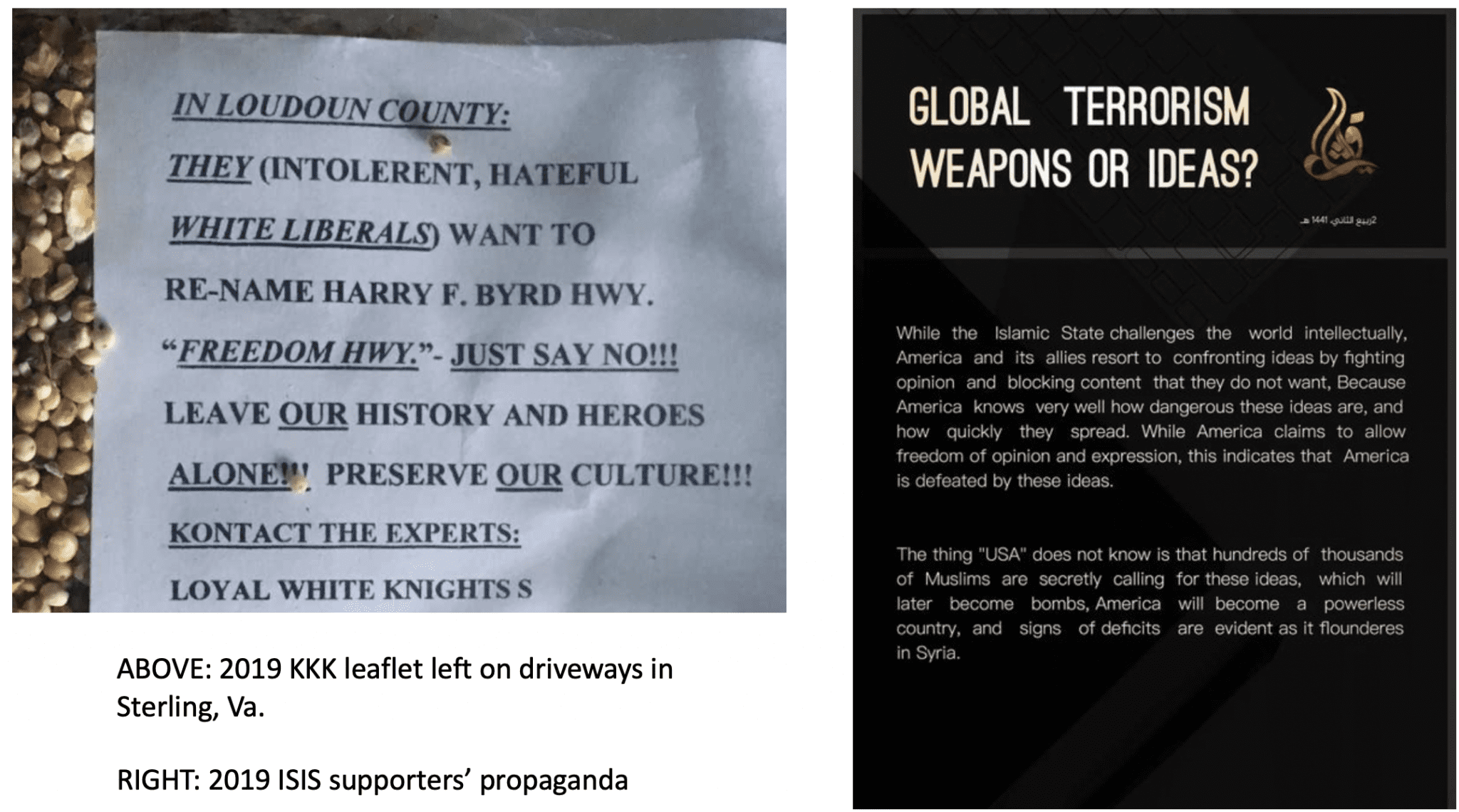 Dozens of KKK recruitment flyers were left in front of homes in Loudoun County, Va., this past July. The Sterling, Va., neighborhood targeted is located just off of Virginia State Route 7, also known as the Harry Flood Byrd Highway, named for the late segregationist governor and senator. An 11-year-old girl was leading a local petition drive to rename the road Freedom Highway, leading the Klan to use that as the anchor for their recruitment pitch. Similarly, ISIS propaganda goes into lengthy pitches arguing that Muslims are oppressed in the West and therefore need to join their ranks. Both take current events and paint an aggrieved narrative on why people need to join their fight.

Pitch based on recruits’ feelings of inadequacy 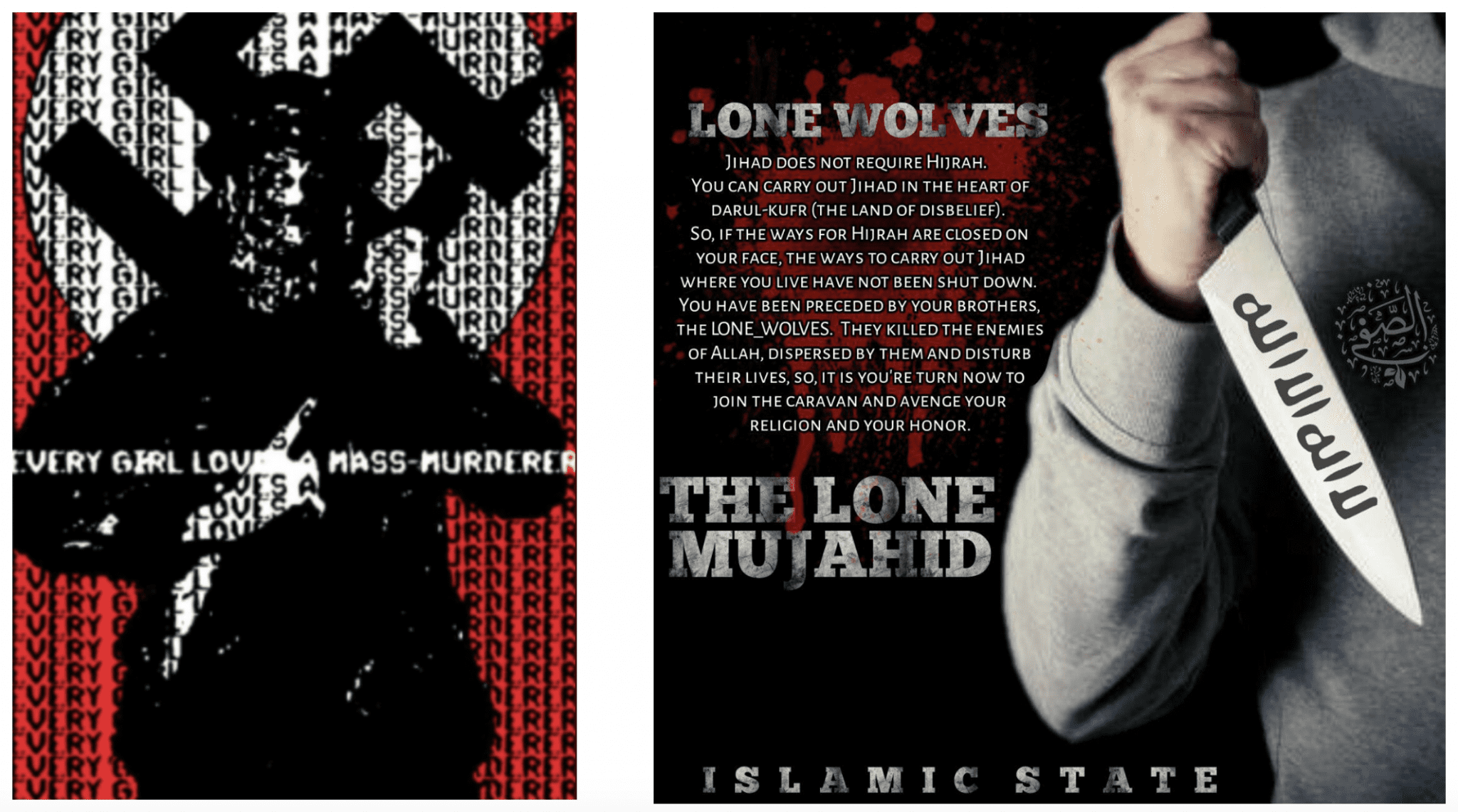 Both types of extremist propaganda often appeal to potential recruits who feel inadequate in some way, claiming that by committing an attack in the name of their cause the assailant will gain notoriety or an importance they hadn’t attained before. 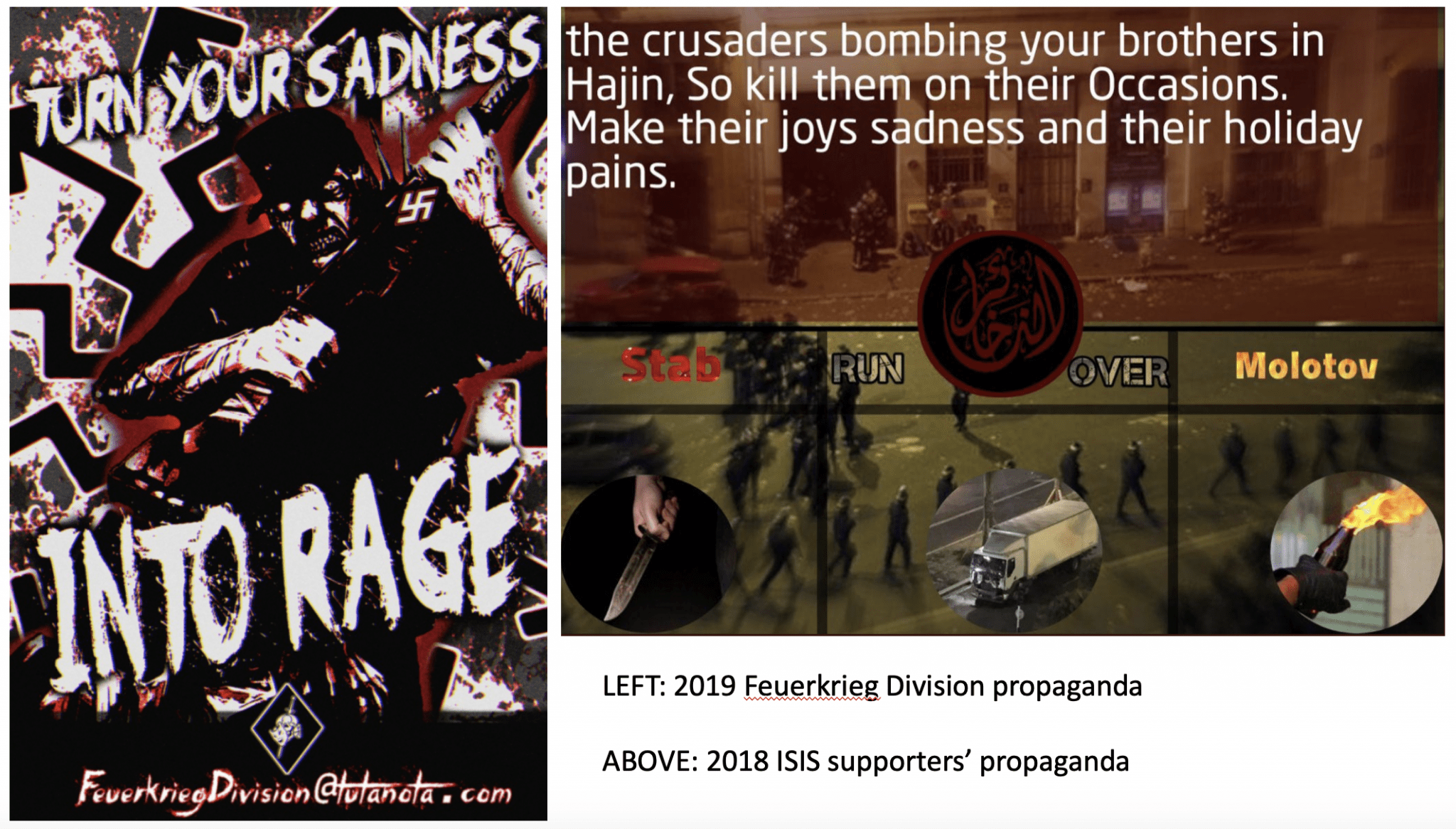 Both types of propaganda lean heavily on tapping into grievances that may be already harbored by potential recruits, and converting those grievances into acts of terror. 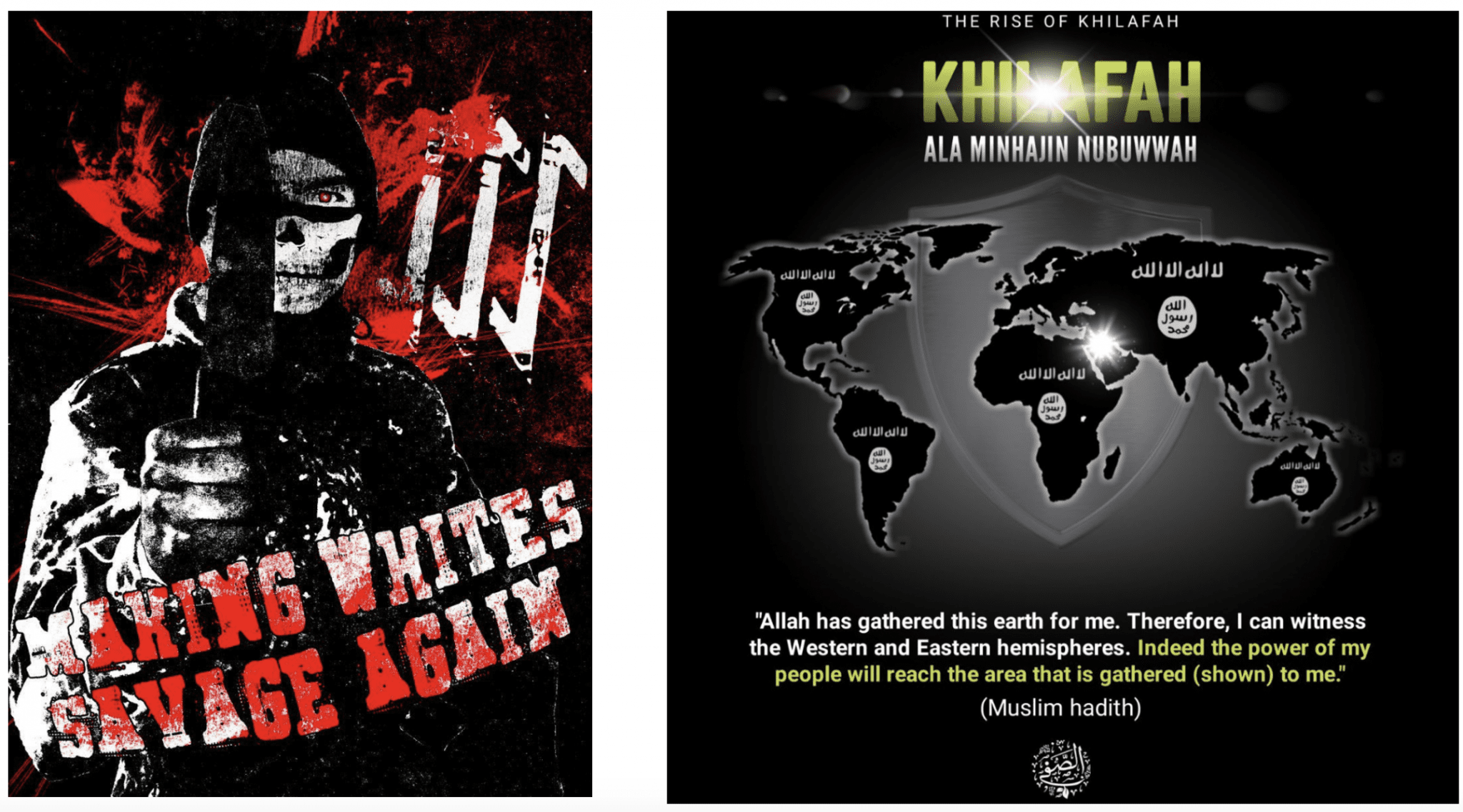 White nationalist and Islamic extremist propaganda both include themes of dominion, trying to draw would-be recruits with claims that theirs is the ideology that will win and reign in the end.

White supremacists and Islamist extremists often share the belief that societal collapse will hasten their aims to construct either a white or Islamic civilization out of the ruins. Accelerationists seek to wedge themselves into chaos and hasten the arrival of societal collapse. 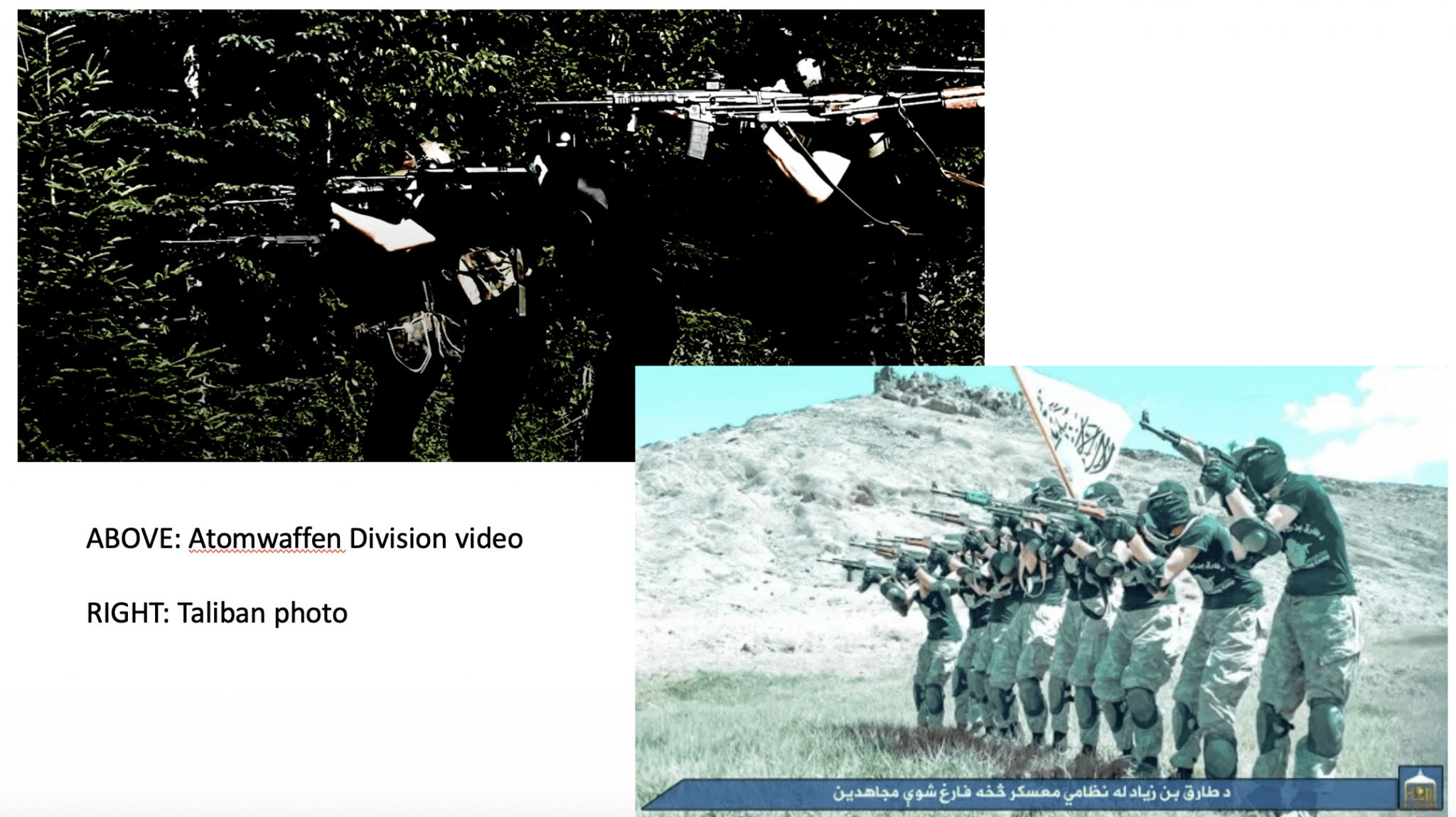 The Atomwaffen Division recruitment video “Accelerating Vengeance!” has been readily available on online file sharing sites. With a soundtrack of heavy techno music, masked, camouflage-clad adherents are shown conducting rifle drills, practicing hand-to-hand combat and target shooting in the woods along with shooting on a separate snowy range. Similarly, Islamist extremists regularly release videos and photos trying to appeal to machismo, propaganda that simultaneously aims to warn foes of their toughness and hook recruits who want to act tough. 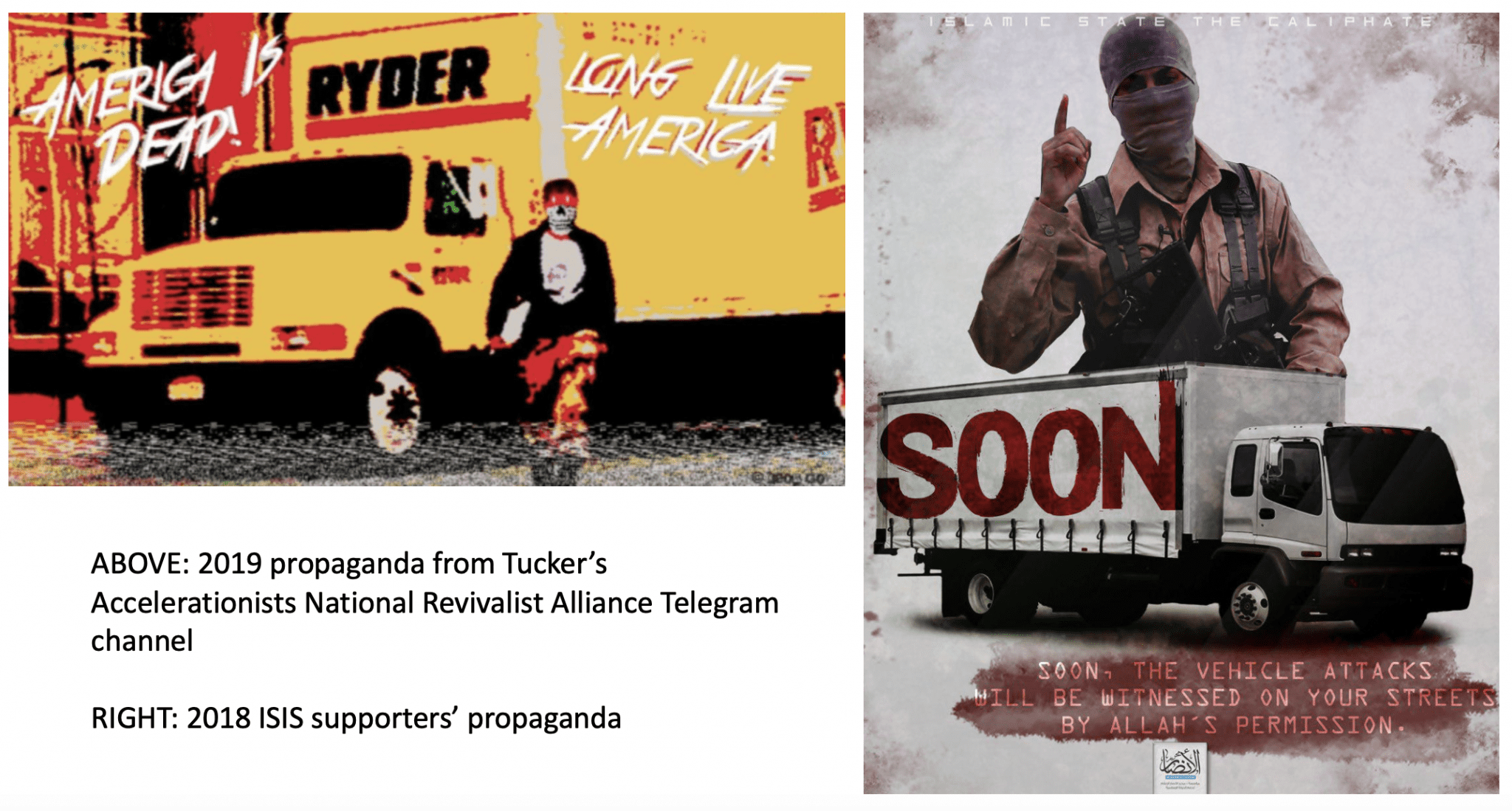 The copycatting memes tell would-be attackers that if someone else pulled off an attack, so can they. A meme posted on a white nationalist Telegram channel last summer portrayed a masked individual walking away from a parked Ryder van — the same rental company used by McVeigh in his truck bomb — with the words, “America is dead! Long live America!” And ISIS frequently cites the 2016 Nice vehicle ramming attack and other truck attacks — with effectiveness, as we’ve seen copycats. Last month Jerry Drake Varnell, 26, of Sayre, Okla., was sentenced to 25 years in prison for plotting to blow up BancFirst in downtown Oklahoma City with a truck bomb. Government officials said Varnell liked anti-government groups on Facebook and messages referencing McVeigh, and investigators found on the day of his arrest a speech written by Varnell that included conspiracy theories about McVeigh. 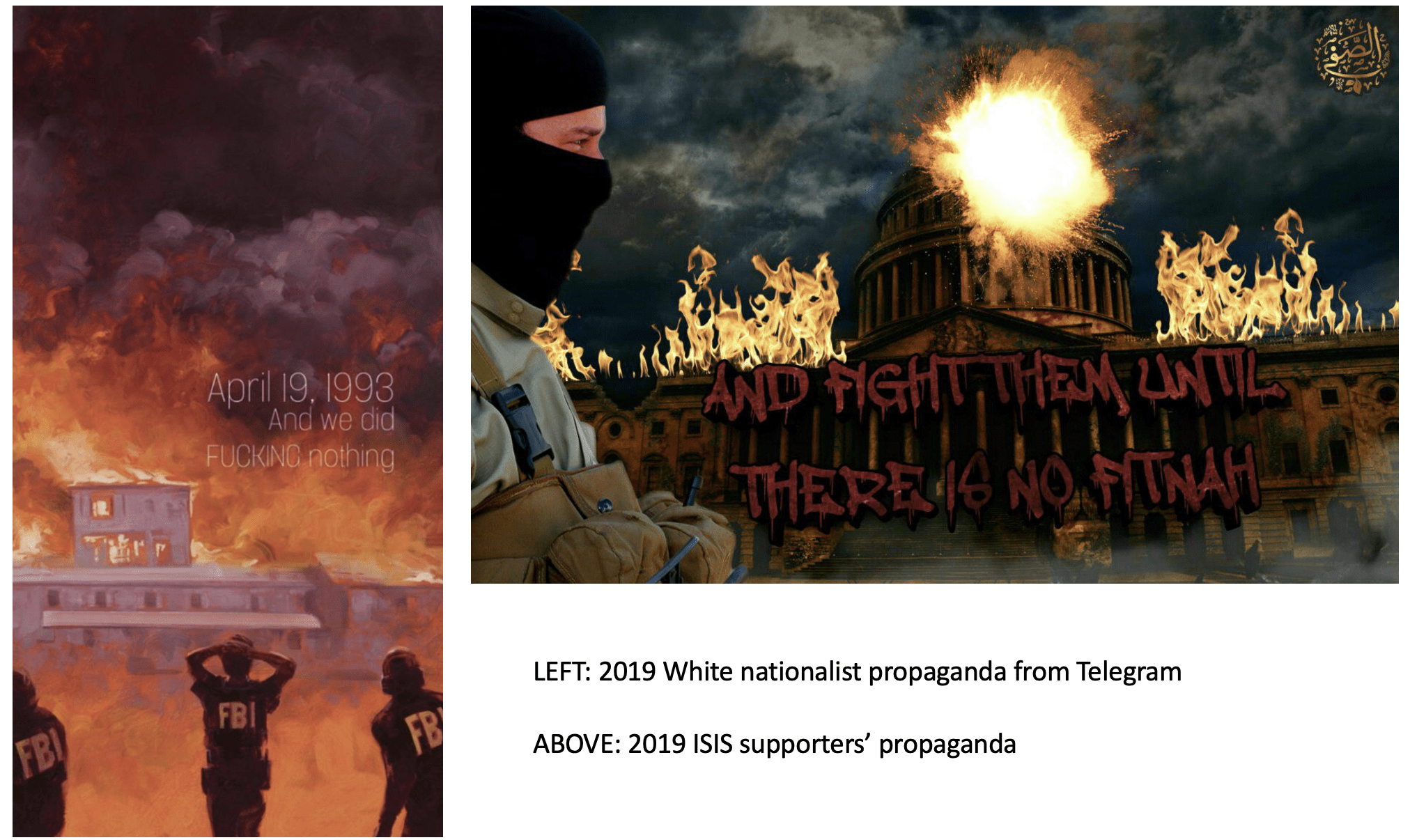 Terrorists often cite specific events as their reasons for committing deadly acts, often drawn from a pool of incidents used for incitement by like-minded extremists. McVeigh went to the site of the Waco siege to show support for the Branch Davidian compound and used it as a springboard into anti-government extremism. A white nationalist propaganda producer last summer distributed an image portraying the Waco compound burning, with FBI agents in the foreground, and the words, “April 19, 1993 – And we did FUCKING nothing.” ISIS propaganda often depicts attacks on U.S. government institutions. Both white supremacists and Islamist extremists tell followers that the government is committing crimes and that they need to step up and counter it. 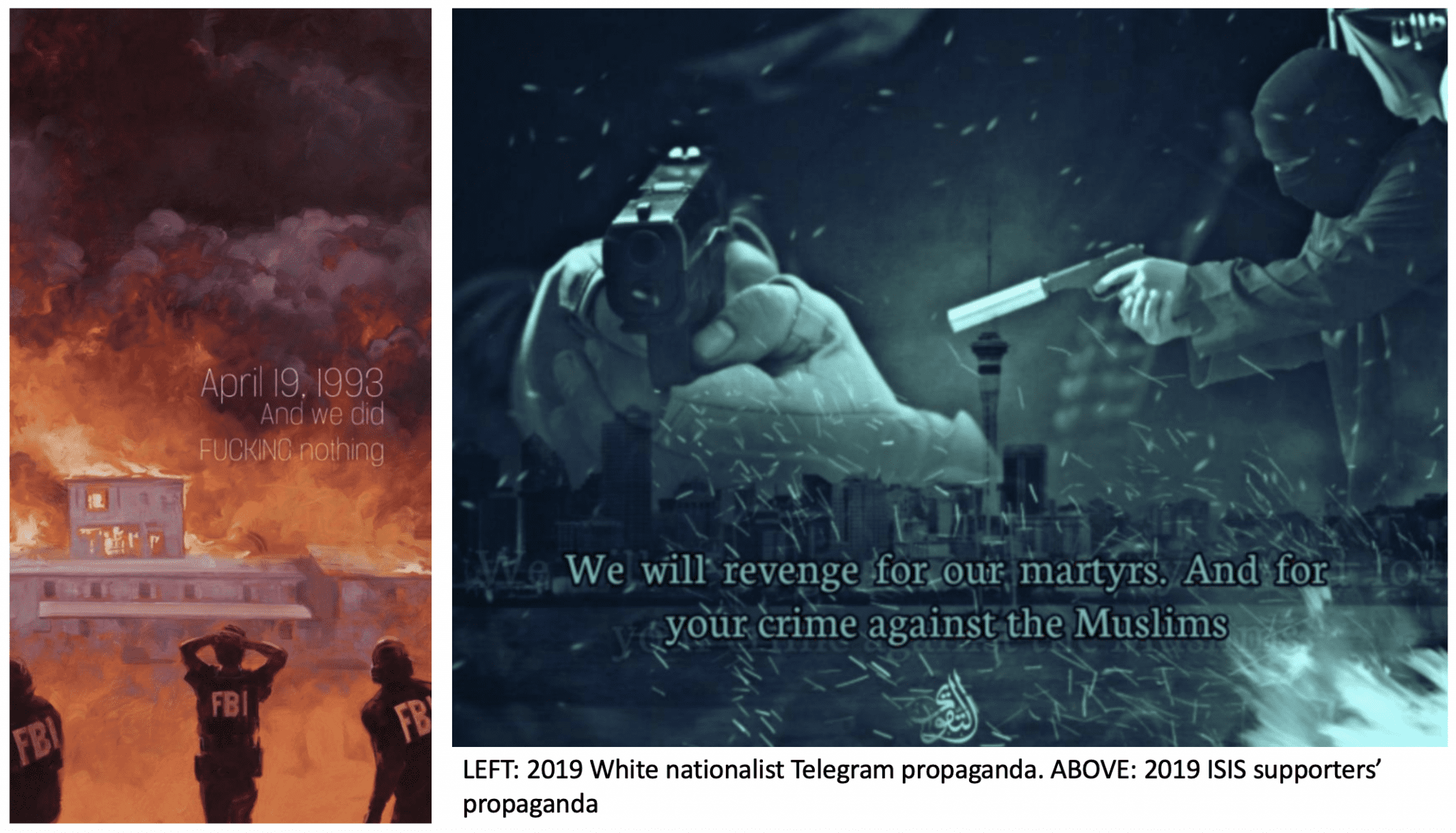 Revenge messages cutting across ideologies regularly circulate through online extremist messaging, though the veneer of how terrorists try to justify their actions often slips to reveal operatives motivated by hate who robotically quote what an online mentor said about avenging a cause du jour.

Promotion of weapons and tactics 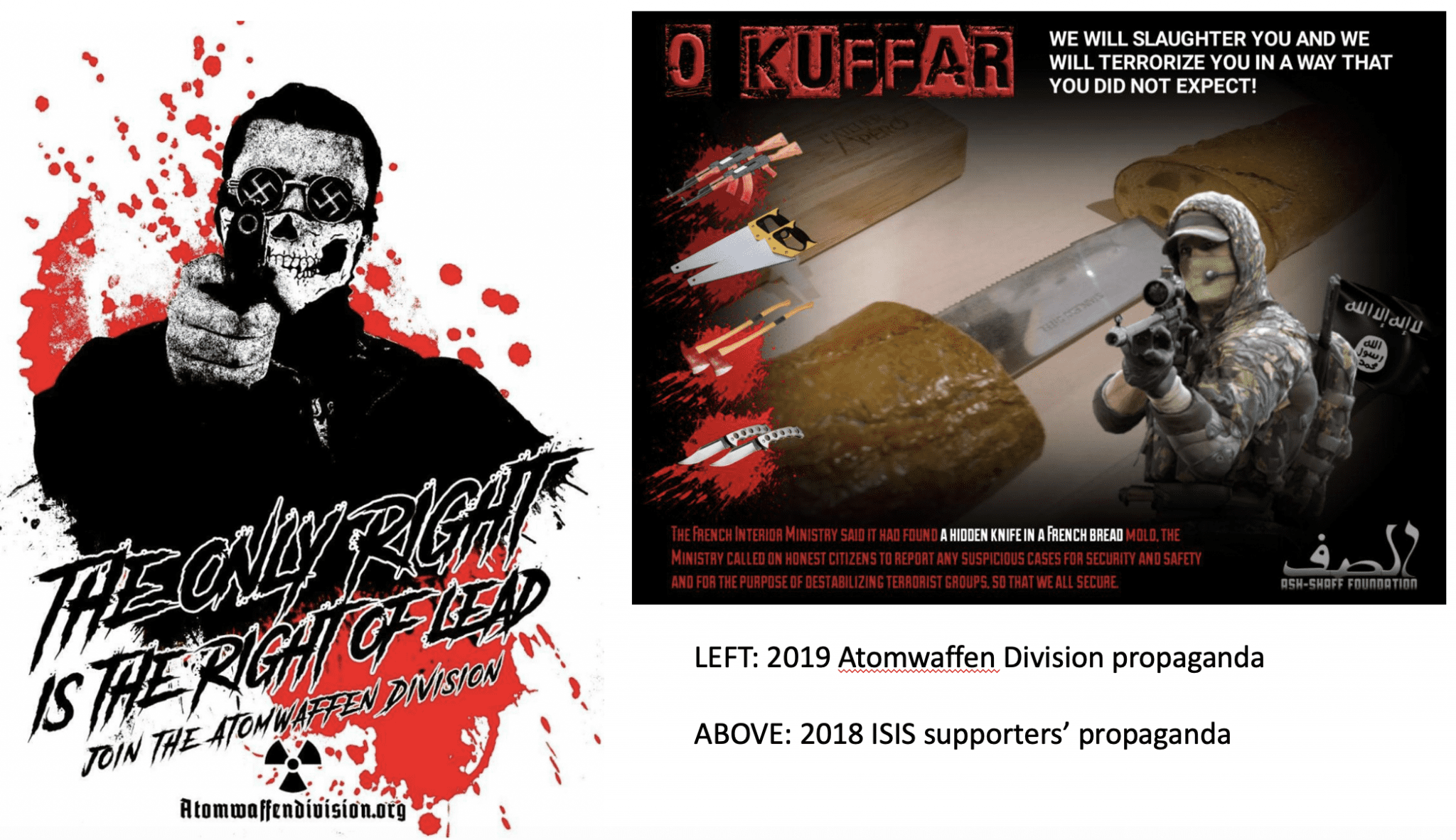 Propaganda is frequently used to urge would-be terrorists to utilize simple or easily attainable weapons to carry out attacks. And the propaganda — including on weapons selection, training or constructing explosive devices — produced by either group is being put onto the internet in an open-source library for either or anyone to use. 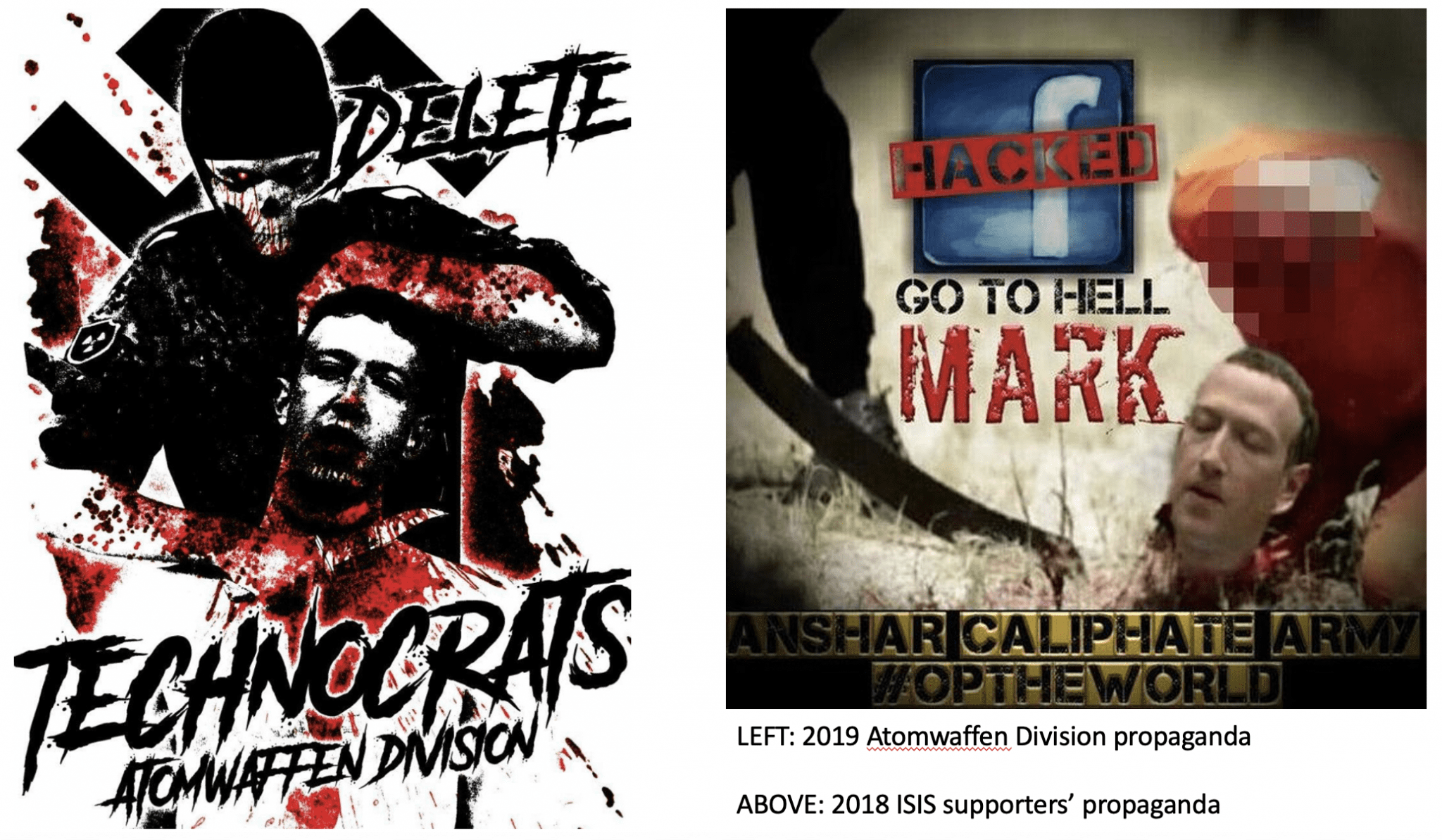 Twitter, Telegram and Facebook all have been the targets of online threats from white supremacists and Islamist extremists for their censorship or removal of extremist accounts. Social media is important to extremists not just to recruit and inspire but to document attacks: Pittsburgh shooter Robert Bowers posted on social media “I’m going in” before his attack and New Zealand mosque shooter Brenton Tarrant linked to his attack livestream and told the like-minded to “do your part.” 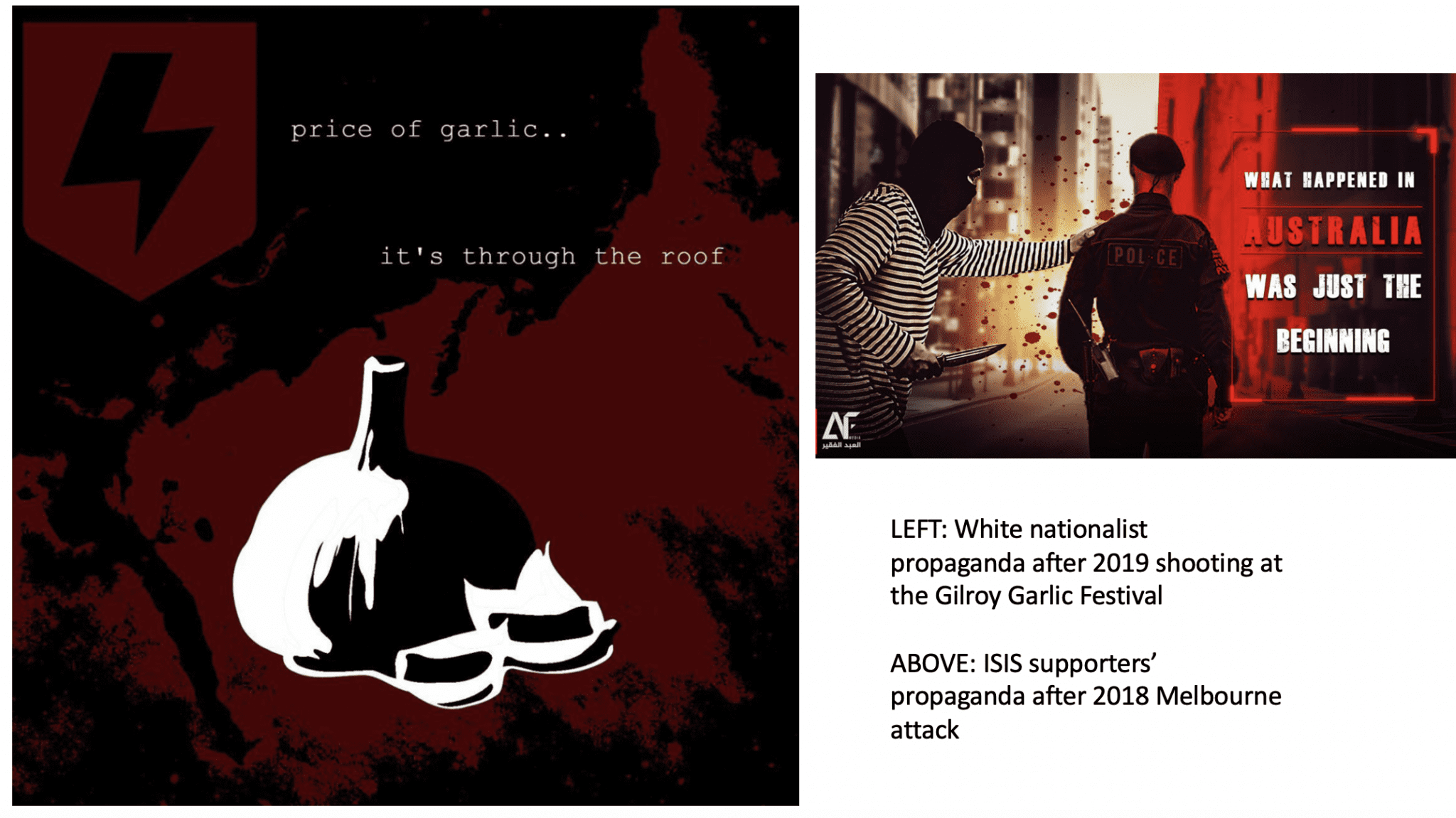 Propaganda from both ideologies will seize — quickly — on violent current events to promote their causes and try to instigate further attacks. There is an urgency around this propaganda as extremists hope that the like-minded conduct their own attacks sooner rather than later, keeping communities on edge and the news cycle in their corner.

Anti-Semitism and threats against the Jewish community 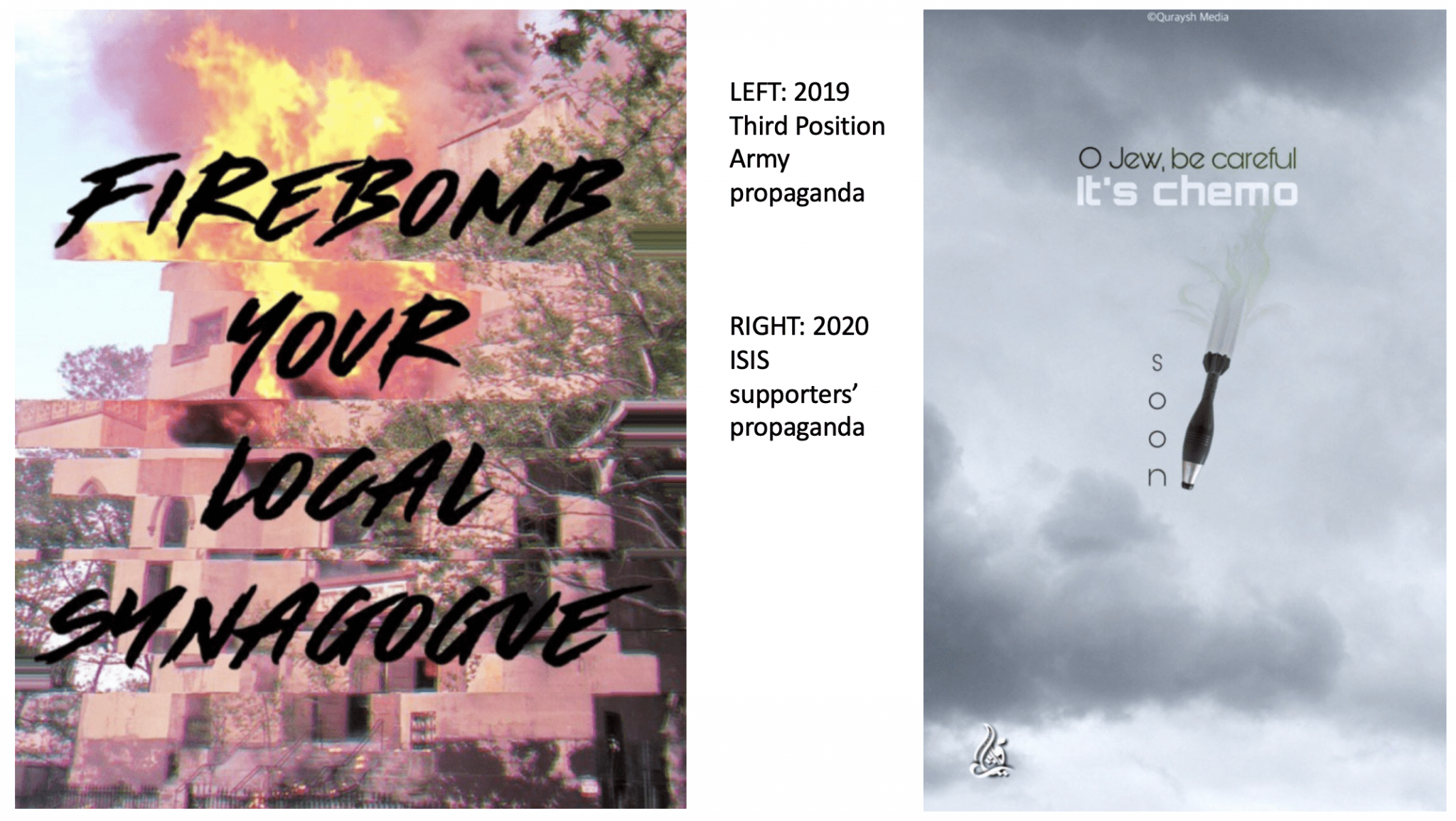 Anti-Semitism themes and overt threats against the Jewish community are a reflection of strongly shared ideology between white supremacists and Islamist extremists, and frequently a cornerstone of their propaganda as well as target of their terror attacks. 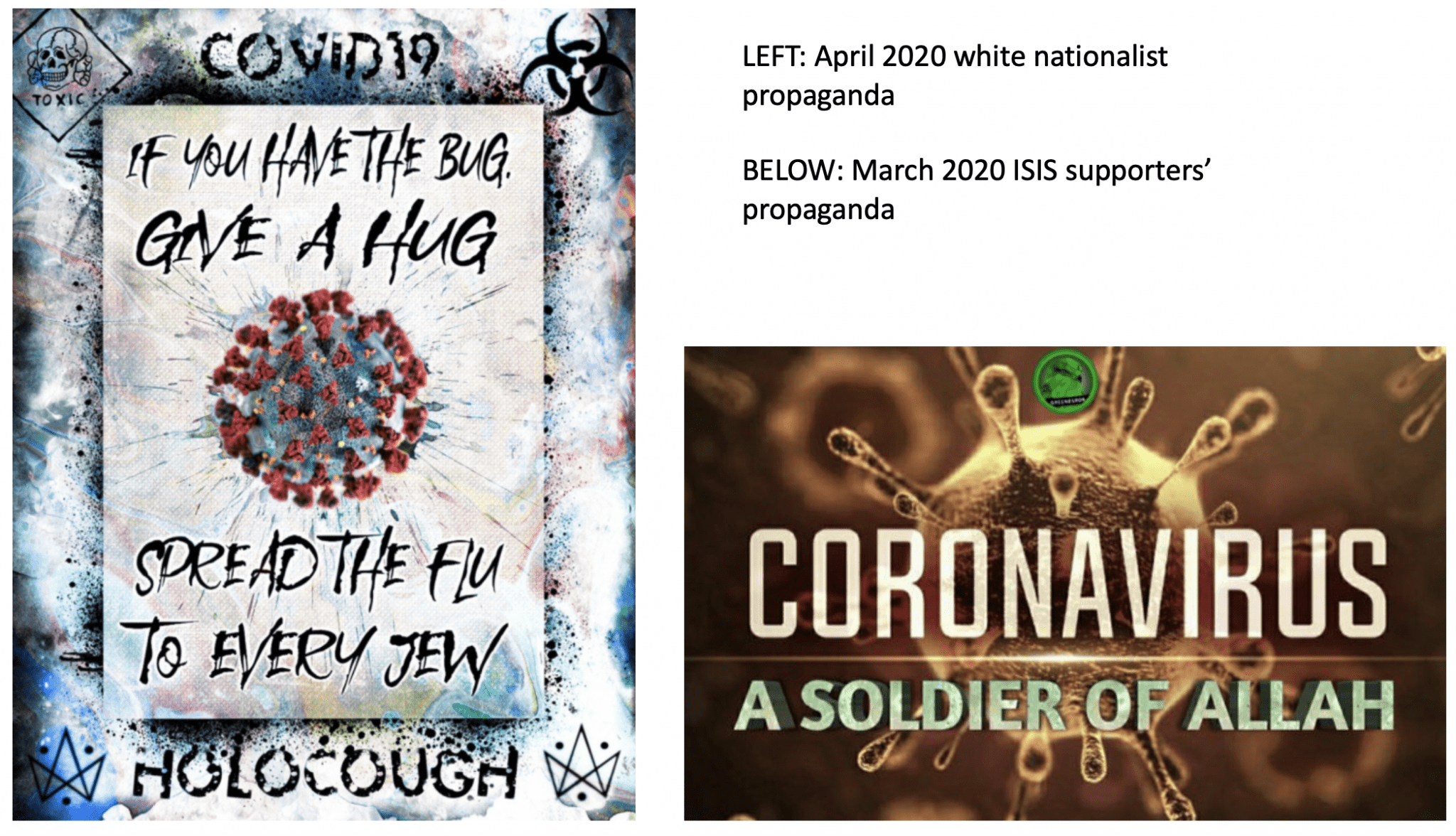 White supremacists have been filling online forums and social media with conspiracy theories blaming Jews and ethnic minorities for the coronavirus, and groups that paper campuses and other locations with hate fliers and stickers have been including the virus in their propaganda. “The last thing they want,” ISIS said in their al-Naba newsletter last month, is for jihadists to be currently preparing new attacks “similar to the strikes of Paris, London, Brussels and other places” while the security apparatus is focused on responding to – or has its ranks reduced by – coronavirus. Terrorists “must intensify the pressure” while countries are weakened as financial difficulties and “preoccupations with protecting their countries” will weaken efforts to confront terrorism, ISIS predicted.

While these examples culled from the trove of online extremist propaganda do not hold back with violent imagery and themes, it’s critical to note that as extremist methods and messaging have evolved white supremacists and Islamist extremists have paid special attention to their need to be palatable — so they can reel in new members with a more mainstream tone, and so they get less pushback from portions of the populace who generally agree with some of their less-extremist promoted messages.

These promotional manipulations try to cloak or soften the core aims of the extremists, which remain unchanged but with greater acceptance or more people turning a blind eye will become a greater threat. Tracking all messaging — the violent, hate-filled, and seemingly innocuous — gives not only an insight into extremists’ branding strategies but pinpoints operatives and what new audiences they may be targeting.

How Terrorists Are Trying to Make Coronavirus More Friend Than Foe