The Challenge of Lone Wolf Jihadists 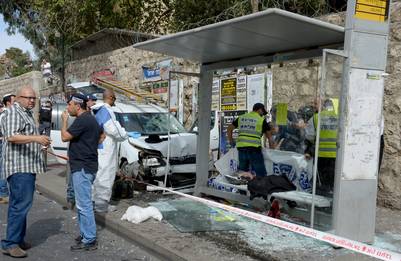 Since October 1, 2015, when an Israeli couple was killed in a shooting attack while driving with their four children, there have been a series of attacks on Israelis, mainly by Palestinian teenagers using knives, guns and cars.

The attack marked the beginning of a wave of terror incidents known as lone wolf attacks, which are not planned or coordinated by any of the terror groups.

A car-ramming attack at the entrance to Jerusalem, in which the Palestinian driver drove into a bus stop wounding 14, has shown that hermetic protection is difficult to provide.

These attackers might not have shown any previous signs of radicalization. Stabbing a person with a kitchen knife by a young terrorist might not be taken as seriously as an attack planned by an organized terror group; nevertheless, it is no less deadly. The perpetrators might not be “commissioned” to carry out attacks, but they have the blessing of radical Islamic jihadi groups encouraging others to do the same.

Another recent attack carried out by a lone terrorist who managed to smuggle a rifle into his rucksack shot at a crowd relaxing at a pub in central Tel Aviv on a Friday afternoon, killing two and injuring seven. He managed to escape. His apparent reason was revenge for the police shooting his cousin. A copy of the Koran was found at the adjoining grocery store he’d visited before the shooting. The success of this attack will likely motivate others to take similar action, authorities fear.

The age of the attackers range from 18 and younger, and is not limited to gender. Two days ago,two 13 year old Arab girls from the Israeli city of Ramle went to the central bus station carrying school bags. When the security guard at the entrance asked them to show him their identity cards, one pulled a knife out of her bag and stabbed him. Following their arrest, they told security service investigators they had come to the bus station with the express purpose of stabbing Jews. They were another link in the chain of attacks of lone assailants.

In almost every case, the attackers have been shot dead by security forces, but this has not deterred others from carrying out similar acts of apparent jihad.

Boaz Ganor, executive director of the Institute for Counter Terrorism in Herzliya, said at a recent conference to discuss this latest lone wolf jihadi phenomenon that it is important to distinguish between the types of attacks — the single individual — the lone wolf, and one planned by a terror organization.
“The moment you understand the type of attack it is, then you gain a clearer understanding of how to tackle it, and how to prevent it, in certain cases,” he explained.

The impact of a lone wolf attack is much more limited than that of the organized attack. The Paris attack in November was well-organized, resulting in a greater number of casualties.

Ganor said, “We originally thought that it was easier to prevent organized attacks because there were more people involved and there are various ways in which intelligence can pick up on what is happening as opposed to what is happening in the mind of a single individual where there is no warning whatsoever making it much more difficult to prevent.”

The phenomenon known as “zombies,” which began in October 2015, involves
a “universal soldier” who  acts upon command without thinking twice. And this isn’t confined to just Israel. The murder of a British soldier, Lee Rigby, in 2013, in the UK, was executed on a busy street in London by a jihadist from Nigeria who’d converted to Islam; not to mention the murder of a policeman in Queens in New York in 2014. In both cases, the killers had been radicalized and  influenced by social media.

“We see an escalation throughout the world –- Israel is no different. There is hardly a western state that is immune to the lone wolf attacks,” Ganor said, adding, “Intelligence has great difficulty knowing if or when these attacks are going to occur. What we are seeing is a process of incitement. For example, the Al Qaeda magazine, Inspire. Al Qaeda understands the importance of inspiration resulting in radicalization. The attacks are usually justified on  social media before and after they occur.”

The people in charge of social media networks, such as Twitter and Facebook, share enormous responsibility and are nowhere near understanding this the use of their social media for purposes of jihadi propaganda and recruitment.

“We are starting to see some change, some willingness to respond and address these issues,” Ganor said. “Before an attack carried out in October, the terrorist posted on Facebook a poster saying, ‘how long will the humiliation continue.’ It’s very important to understand the concept of humiliation.”

In a new development, Twitter has suspended 125,000 accounts for threatening or promoting terrorist acts, most of them supporting the Islamic State, the company said.

In some cases, the social networks provide warning. In terms of numbers, since the intifada began, there were 100 million exposures. The terrorist organizations are also using Facebook for training skills, such as  how to prepare a blade so that the physical damage will be maximal.

So, what’s the solution?

Well, Ganor believes it’s a combination of preventing incitement by tackling the issue of social media and mitigating the frustration of the youth resulting mainly from restriction of movement — in Israel’s case.

According to a survey carried out by Quilliam, the London-based counter radicalization organization, discrimination is central to the experiences of those who live in societies foreign to their own culture, and the failure of many Muslim communities to integrate into their host society in turn lays the foundation for radicalization resulting in terrorist attacks.