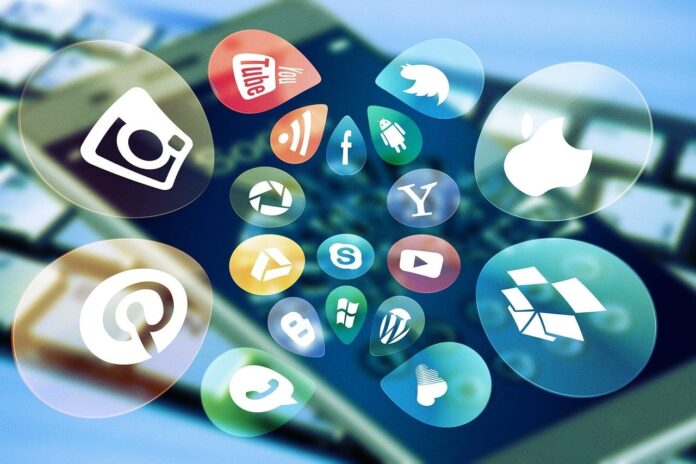 Previous research has considered major platforms such as Facebook, Twitter, and YouTube to be the most widely used social media platforms for violent extremism and violent extremist content in the United States.[i] Other platforms such as Google+, Kik, LinkedIn, Myspace, Vimeo, and 8chan have also been considered as popular platforms for far-right content.[ii] However, research suggests that the popularity and accessibility of certain platforms has changed rapidly in recent years. The authors’ study revealed that social media platforms were not all equally utilized and therefore were categorized across a spectrum of popularity. The categories used to describe this spectrum of popularity were Highly Active, Moderately Active, Little/No Far Right Activity, and Offline (see table 1). 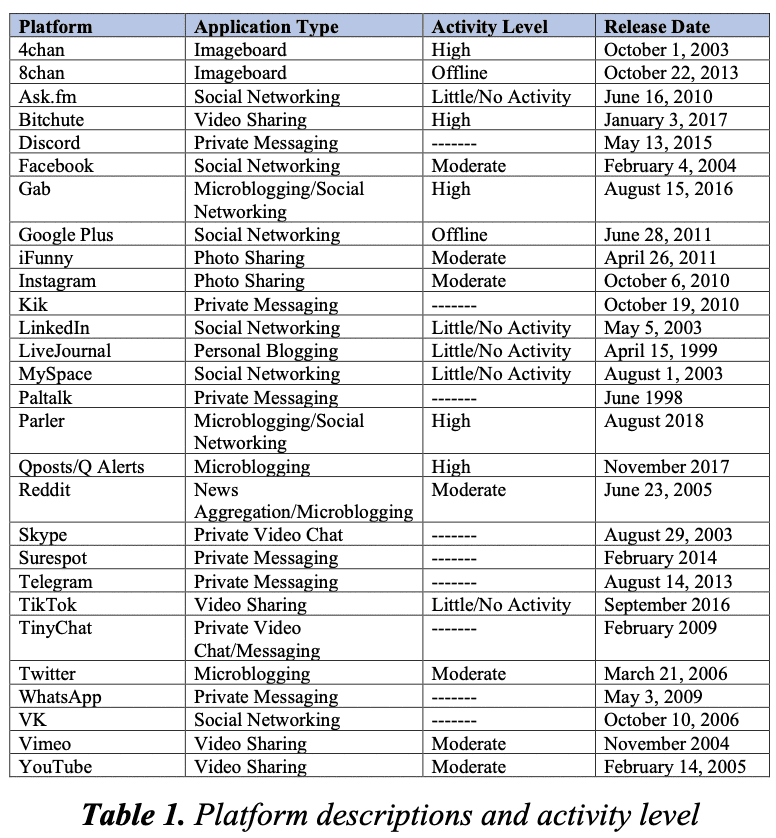 The four largest social media platforms globally – Facebook, Instagram, Twitter, and YouTube –were placed in the Moderately Active category. This was a particularly interesting finding, as locating far-right content on Facebook and Twitter was difficult despite long being considered hot spots for far-right recruitment, propaganda, and conversations. There were thousands of tweets discussing political ideologies, but the majority of conversations generally elucidated the current polarization of party lines. Facebook was found to be much more moderate than expected as well. Part of the difficulty finding far-right content on Facebook may have been due to Facebook’s Community Standards. Facebook has one of the most sweeping content takedown policies of any of the platforms explored. Facebook’s Community Standards directly states that it will remove terrorist activity, organized hate, or any incitement of violence that is deemed credible.[iii]

There is a transparent shift happening from Facebook and Twitter to Gab and Parler from both moderate conservatives and those with far-right ideologies in order to protest against Twitter and Facebook’s strict content removal policies. During the analysis of far-right content on Twitter, the authors discovered a tweet put out by California Congressman Devin Nunes on June 24, 2020, asking his followers “Are you on Parler yet?” (see image 1). Congressman Nunes continued advocating for the right wing to leave Twitter in two more tweets in the following days, with both receiving high interactions. Congressman Nunes’ efforts helped catapult Parler to the No. 1 ranking social media app available on the Apple Store, overtaking Twitter and Reddit. Although this tweet itself cannot be categorized as far-right content, it reveals a very open and transparent pushback from the right wing to move away from Twitter and Facebook to sites that emphasize freedom of speech and less censorship. 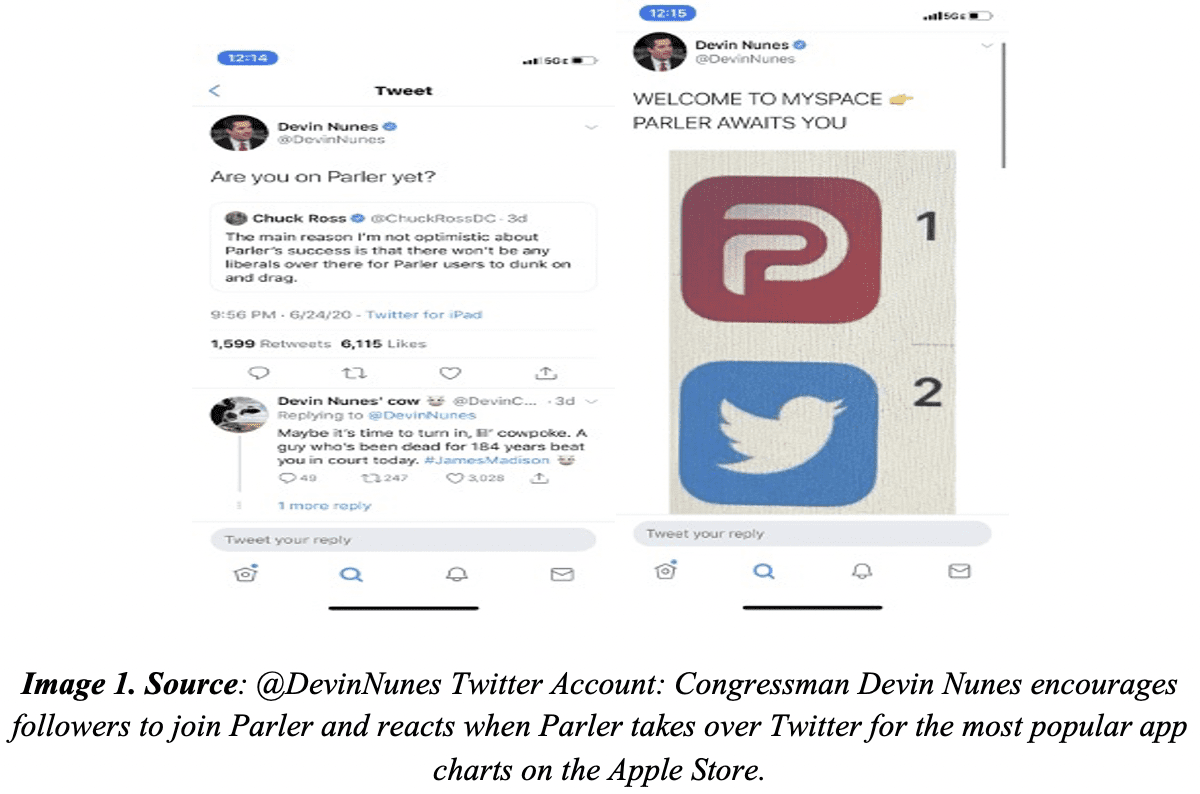 Five of the platforms analyzed in this study – 4chan, Bitchute, Gab, Parler, and Qpost/Q Alerts – were placed in the High Activity category. Bitchute has flown under the radar of many CVE stakeholders and was not touched upon in any of the previous literature before this study. The platform is a video-sharing source that is largely filled with false or questionable news articles, conspiracy theories, and far-right propaganda. Further, 4chan hosts an entire thread titled “Politically Incorrect” or “/pol/” where analysis found a plethora of far-right content and extremist users within the comment sections of images. The “/pol/” thread has been connected to the novel boogaloo bois movement.

Also surfacing out of 4chan is highly active online platform QAnon (“Qalerts”). QAnon is a conspiracy theory set in a belief that President Trump is going to bring justice to a highly corrupt government system with undertones of racism, xenophobia, anti-Semitism, and justified acts of violence.[iv] Not only is QAnon its own popular platform that is filled with far-right extremism, it is also a widely popular hashtag across other platforms. The QAnon platform was just as full of far-right content as Gab and Parler, if not more. 4chan, Bitchute and QAnon will continue to be three of the most critical online platforms for far-right propaganda, especially as users move away from mainstream platforms such as Twitter, Facebook, and YouTube due to content guidelines and takedown policies.

The study also utilized content analyses to examine patterns in tones, linguistics, symbols, and hashtags. Most threads and conversations turned into echo chambers of belittlement and hostility and revealed a common belief that the United States is headed toward an inevitable second civil war for which the far-right is prepared and trained. Patriotic expressions were apparent in the tone, word patterns, symbols, and profiles of far-right users. The words “civil war,” “war,” “revolution,” “invasion,” “left wing militants,” and an urging for Americans to train for war were repeatedly seen throughout the content. Many of the memes that were pushed out by far-right users included bald eagles, military personnel, weapons, the American flag, and the Confederate flag, further emphasizing the patriotic expression that is critical to the identity of many far-right extremists (see image 2).

One of the primary goals of the authors’ study was to contribute to the literature on group polarization and groupthink within the phenomenon of violent extremism. Group polarization theory often leads to an “us” versus “them” mentality. The content analysis revealed a pattern in pronoun usage. Rather than users using the first person “I” when sharing their views, the majority of content used the plural “us” and “we.” There is an “us” versus “them “mentality within the posts, which does fall in line with the theme of war and engaging with some sort of perceived enemy. This was one of the most apparent patterns in the data analyzed as well. The far-right has collective enemies that are seen as a threat, while also heavily uniting themselves online to further share hate. There was also large evidence of groupthink dynamics occurring online. When one individual hinted toward violence, it often led to others arguing for even further damage (see image 3). The users rapidly went down an escalating echo chamber only making their potential plots more and more dangerous and risky. The ideas became more extreme than the original poster had initially decided on their own, and were influenced by others’ agreement and escalation, which is the dangerous essence of groupthink.

The popularity of particular platforms and the rise of new ones changes rapidly. The United States is witnessing another one of those changes as masses of the far-right, as well as moderate conservatives, move away from sites that have content and user guidelines to less-monitored platforms, such as Bitchute, 4chan, Gab, and Parler. These platforms are often such drastic echo chambers with no desire for progressive outgroup conversation that effective counternarratives may be difficult if not tailored correctly. P/CVE stakeholders must shift with this trend to be producing content and surveilling manifestations of VE behavior or activity on these platforms more heavily than before.[v]

[i] “The use of social media by United States extremists.” (2018). University of Maryland  START. Retrieved June 14, 2020 from https://www.start.umd.edu/pubs/START_PIRUS_UseOfSocialMediaByUSExtremists_ResearchBrief_July2018.pdf.

Samantha Walther
Samantha Walther was a Program Coordinator for the Institute for Women’s Leadership at Nichols College, with previous experience researching policy and criminal justice issues at domestic and international levels. Sam received a Bachelor of Arts in Government from Hamilton College in 2018 and a Master of Science in Counterterrorism from Nichols College in 2020. Previous research topics include a field study in Sweden on criminal justice reform and immigration, civil liberties violations of Muslim-Americans since 9/11, as well as work on the Nuremberg Trials and human rights which was awarded the 2017 Raphael Lemkin Essay Prize on the Practice of Genocide. At the American Counterterrorism Targeting and Resilience Institute, Sam researches the role of women in right-wing extremist groups and movements, with a comparative focus lens on the role of women in both right-wing and Islamist groups. She also explores the trends of the left-wing, militant jihadi, and far-right presence online.