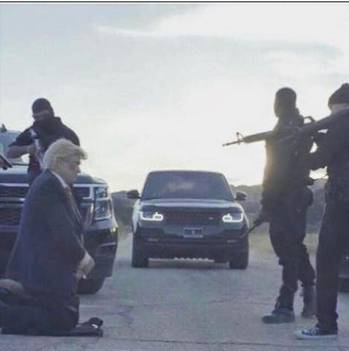 Death threats in recent months against Republican presidential candidate Donald Trump, especially at the time of his trip to Mexico to meet with Mexican President Enrique Peña Nieto, are being taken seriously by the US Secret Service (USSS) and other federal agencies who’ve intercepted intelligence on “legitimate” threats to Trump, including the FBI, Department of Homeland Security (DHS), Drug Enforcement Administration, CIA and National Security Administration, according to senior US intelligence officials who spoke to Homeland Security Today on background.

The officials told Homeland Security Today death threats prior to Trump’s meeting with Nieto and during and following his policy speech on illegal immigration “spiked considerably” in various forms of intelligence “chatter” intercepted and collected by intelligence agencies, “causing serious concern” on the part of the USSS, according to one official.

Writing for Vessel News, Josh Caplan wrote, “The announcement of Republican Nominee Donald Trump’s visit to Mexico to meet with President Nieto sent shockwaves throughout the media. However, not everyone is excited by the prospect of Trump smoothening things with our neighbor to the South. Instead, a slew of rambunctious Twitter users would prefer to see Trump assassinated during his visit.”

An intelligence official said the USSS and FBI have been monitoring threats against Trump on social media, and that the USSS “undoubtedly” will be contacting persons whose threats are deemed to be serious enough to be thoroughly investigated.

Both agencies have actively been datamining social media for threats against Trump, as well as against Democratic Presidential candidate Hillary Clinton, one of the officials said, noting, however, that “there seems to be much more vitriolic and disturbing threats voiced by individuals against Trump … And they’re being treated seriously.”

According to the intelligence officials, the USSS and FBI have “aggressively” been monitoring social media threats against Trump, and will “be paying visits” to individuals determined to pose “serious threats … and, if necessary, arrests will be made.”

“Expect arrests,” one of the officials said. “These threats are being taken seriously, and they’re not going unnoticed by” the USSS and FBI.

In March, a 15-year-old Georgia boy was arrested after allegedly making death threats against Trump on social media. Meriwether County Sheriff Chuck Smith said the young man was charged with terrorist threats and acts. The threat was reported to the FBI, who reportedly relayed the information to the USSS.

Earlier that same week, another 16-year-old Georgia boy was also arrested for making similar threats against Trump on Twitter.

More serious threats made via social media against Trump, though, have not resulted in any further arrests. Officials would not confirm whether any of these threats are being investigated or whether, if traced to having been made by persons in the US, will also be arrested.
In July 2015, Mexican drug lord “Joaquin “El Chapo” (Shorty) Guzman threatened Trump via his son Ivan’s Twitter account. Guzman wrote: “If you keep p****** me off I’m going to make you eat your words you f****** blonde milk-s*****’. Guzman offered a $1 million bounty for killin Trump.

In response, Trump notified the FBI about El Chapo’s threat.

In May 2016, a protester at a Trump event in San Diego held up a sign decreeing the drug cartel will murder Trump. “If TRUMP wins He’ll be DEAD with in A week The Cartel wont have his Bullsh*t,” the protestor’s sign read.

At the same protest, piñatas depicted Trump with his head severed, a trademark form of murder against opponents practiced by Mexican-based narco-cartels.

Intelligence officials said there are just so many potential threats made by individuals on social media “that’s it’s a daunting task to try to investigate all of them.”

Neither the USSS nor FBI would comment on how many resources they’ve assigned to checking out social media threats, or the criteria they’re using to identify specific individuals considered “potentially serious threats.”

One of the Twitter accounts monitored is #KillDonaldTrump, with the sign, @killtrump, which was eventually suspended on February 22, 2016 after having been established the previous August. However, the Twitter page remains available. #KillDonaldTrump also remains active. @actonyo tweeted, “can someone kill @realDonaldTrump while hes in mexico please #killdonaldtrump.”

Another Twitter site, #killtrump, was also established.
Both sites have recent postings about killing or assassinating Trump.

As of this writing, these hashtag pages remain active, as do Twitter accounts of individuals who’ve called for killing Trump, all of which contrasts with Twitter’s user policy.

“Any accounts and related accounts engaging in … violent threats (direct or indirect) … may be temporarily locked and/or subject to permanent suspension,” Twitter’s user policy states, stressing that, “You may not make threats of violence or promote violence, including threatening or promoting terrorism.”

In addition, Twitter’s user policy states, “You may not use our service for any unlawful purposes or in furtherance of illegal activities.”

Nevertheless, here’s a small sample of the sorts of “threats of violence or promot[ion of] violence” Twitter disallows, but continues to allow.Twitter did not respond to requests for comments.

In July, @off_end_you, tweeted, “can all the #blacklivesmatter people organize to #killdonaldtrump.”
In May, @pistols410 posted a picture to #killdonaldtrump depicting a Trump look alike on his knees with what appears to be jihadists pointing automatic weapons at him.

@whoissizzIe tweeted, “No more games, no more jokes. This man must be put down, immediately and indefinitely.”

A Twitter page belonging to @jasonG4s, tweeted December 7, 2015, “Somebody kill Trump, I genuinely mean it.”

One person even offered $20,000 to kill Trunp and indicated he could accomplish his assassination.

Other serious death threats from Twitter users can be seen here.