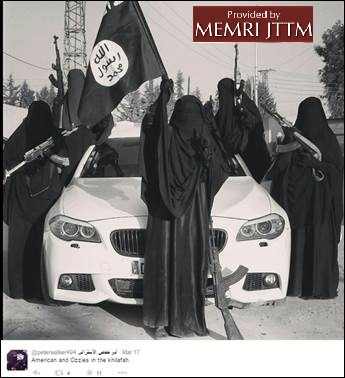 A group of Muslim female Islamic State (ISIS) “Jihad Janes” who’ve been in Syria off and on – including a prominent member believed to be Um Abdullatif, the widow of Australian fighter Mahmoud Abdullatif — are part of an ISIS female brigade called "Al Khansaa” — whose membership some counterterrorism officials believe could number in the hundreds — have formed a clique of female ISIS members from English-speaking countries based in Raqqah — the Islamic State’s Syrian stronghold. The largely Western women in this clique are believed to be the wives and widows of ISIS fighters.

Western counterterrorism officials told Homeland Security Today on background the number of radicalized young Western Muslim women is growing, and that counterterrorism authorities are bracing for potential suicide attacks by these women when they return to their respective Western homes. The ones officials are most concerned about are those unknown to authorities.

The jihadi movement has employed women for years to carry out suicide jihadi attacks.

So far, officials believe more than a dozen young American Muslim women have joined ISIS’s women’s clique or have – or are — plotting to carry out jihad on American soil.

They include 31-year-old Asia Siddiqui, who along with her  Queens, NY roommate Noelle Velentzas, plotted a bombing in the US before being thwarted by the FBI.

Homeland Security Today reported Velentzas and Siddiqui were recently charged with conspiracy to use weapons of mass destruction against persons or property in the United States. The criminal complaint stated the women repeatedly expressed support for violent jihad. For example, Velentzas declared she and Siddiqui are “citizens of the Islamic State.” Siddiqui published a poem in a magazine published by Al Qaeda in the Arabian Peninsula exhorting readers to wage jihad.

Since at least August 2014, the women allegedly plotted to construct an explosive device for use in a terrorist attack on American soil. Although they had not yet specified targets, the women had carefully studied how to construct an explosive device to launch an attack on the homeland, including how to develop bombs with items such as pressure cookers, which were also used in the Boston Marathon bombing.

Then there’s Keonna Thomas, a 30-year-old Muslim convert from Philadelphia who was arrested earlier this month for trying to aid ISIS and participate in their "martyrdom operations."

In addition, an untold number of Somali-American girls who’ve gone missing from their Minneapolis homes also have join the Islamic State, with some perhaps having traveled to Somalia to join the Somalia-based Al Qaeda affiliate and ISIS supporter, Al Shabaab.

On April 20, 2015, Umm Abdullatif “announced plans for an attack on Australian soil set for Saturday, April 25,” according to the Middle East Media Research Institute (MEMRI), which monitors jihadi social media. “The attack is aimed to coincide with Anzac Day, which commemorates all Australians and New Zealanders who served and died in all wars, conflicts and peacekeeping operations; this year, it is marking the 100th anniversary of the battle at Gallipoli."

MEMRI said “Umm Abdullatif is the widow of Australianfighter Mahmoud Abdullatif, and, according to a Syrian opposition source, she is a member of the Al Khansaa brigade in Al Raqqa, Syria. In a series of tweets, she wrote, ‘We have brave lions, mujahideen, in the heart of your land that are thirsty for ur blood. You cannot stop them, as they r the army of Allah. To the Muslims in Australis, we say; CONTINUE what the brothers planned for Anzac Day … and your reward will be with Allah. & There is no stopping the army of Allah. Victory or martyrdom. & 2 the brothers who pland [planned] the attacks, u are tru soljas [soldiers], striking fear into the hearts of d [the] kuffar [infidels]. May allah reward u with nothing but firdaws [Paradise]."

Some of the ISIS clique of wives and widows of male ISIS fighters have distributed photos of themselves brandishingrifles, posing with cars and issuing threats via Twitter, according to MEMRI’s analysis of their social media sites.
“The women apparently share living quarters,” MEMRI said, adding that, “Umm Jihad, the American member of the group, referred to her women friends as a ‘family.’”

Umm Jihad, according to MEMRI and intelligence sources, is 20-year-old Hoda Muthana, a former college student from Hoover, Alabama who is believed to have joined the Al Khansaa brigade and is now working to radicalize and recruit other young Western Muslim women . Muthana reportedly abandoned her family and fled to Syria several months ago to join ISIS.

She graduated Hoover High School in 2013 and studied business at the University of Alabama before somehow becoming radicalized and making her way to the inner sanctum off female ISIS members in November. According to reports, she began to immerse herself in jihadist interpretations of Islam on the Internet. She recently gave an interview to BuzzFeed.

“There is a radicalization process being employed by ISIS’s female members to radicalize and recruit young Western Muslim women,” one of the counterterrorism intelligence officials said.

“On December 23, 2014, Muthana tweeted that she was watching her friend Umm Abdullatif sleep.” On January 7, 2015, Muthana scolded fellow US citizens for failing to enlist in the ranks of jihad in Syria, tweeting, ‘Allahumma barik [God bless] there are sooo many Aussies and Brits here but where are the Americans, wake up u cowards,’” MEMRI reported.

That same day, she tweeted, "Who knew my fate would be living among a bunch of Australians, full on m8 [mate]. Love my Aussie family xo."

“On December 1, 2014, Muthana, or Umm Jihad, tweeted a photo of her American passport alongside a Canadian, British and Australian passport, with the caption, ‘Bonfire soon, no need forthese anymore. The women appear to spend a lot of time together. They likely live with each other or near each other and spend time together while their husbands are away on the front lines of fighting,” MEMRI said.

On March 18, 2015, she announced her husband’s death in Syria. Photos of Umm Jihad with Australian female ISIS members wielding kalashnikovs in front of a BMW car was circulated among many ISIS social media accounts the same day.

Other postings that day included one of Umm Abdullatif with four other women – believed to include Umm Jihad — holding AK-47 rifles and posing in front of the BMW. She wrote, "Ft. [featuring] The Sharrouf Family, me, & Umm Jihad kikn [kicking] it in the Khilafah."

MEMRI said several versions of these photos appear to exist and were originally circulated among Australian ISIS accounts. For example, an Australian fighter with the Twitter account @Peterwalker494 tweeted one in black and white, and wrote, "American and Ozzies in the Khilafah."

Zaynab Sharrouf, the 14-year-old daughter of Khaled Sharrouf and the wife of Muhammad El Omar, who goes by the nickname Umm Hafs, tweeted another photo of the moment, writing, "Chilling in the Khilafah, lovin life. #Sharrouffamily #Ummjihad #Ummabdullatif #Ummzarqawi,Ummdhukifl."

On March 19, Azoz Alhamza tweeted, "#Raqqah Um Abdallatif from #Australia and another fighters from Al-Khansaa brigade with AK47 and BMW 5."

It’s the radicalized female jihadists who now have counterterrorism authorities scrambling for reliable intelligence on them. Given past actions, they are concerned they could make use of sophisticated prosthetics and disguises to carry out suicide attacks.

In February 2008, the Department of Homeland Security’s Office of Intelligence and Analysis issued an intelligence advisory warning that Al Qaeda or other terrorist organizations might try to use women jihadists hiding explosives inside “pregnancy prosthetics … that mimic the look of a pregnant woman.”