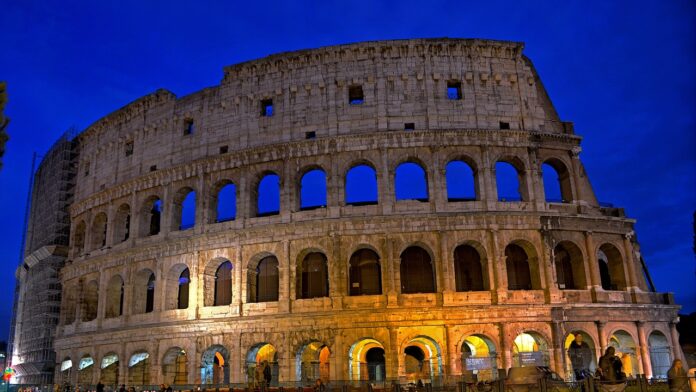 U.S. Immigration and Customs Enforcement’s (ICE) Homeland Security Investigations (HSI) Assistant Director for International Operations Patrick J. Lechleitner, returned two 9th century Italian manuscripts and a Roman coin, a Contorniato, during a repatriation ceremony at the Italian Embassy in Washington, D.C. on Thursday. In addition, Ambassador Armando Varricchio for the Italian Embassy in the United States and Assistant Secretary of State for Educational and Cultural Affairs Mary Royce renewed a memorandum of understanding (MOU) between Italy and the United States on cultural property, first signed in 2001.

Ambassador Varricchio stressed that the event, “demonstrates how even during the pandemic, the collaboration between Italian and American law enforcement agencies has continued to produce extraordinary results. The MOU lays the foundations to give further impetus to almost 20 years of outstanding cooperation with the United States with whom we share the conviction that preserving our cultural heritage is indispensable for studying and deepening our knowledge of the past and building a better future.”

“The United States and Italy have worked together to stop looting and trafficking of Italy’s archaeological heritage since 2001 when our countries first entered into a bilateral agreement. It has been a model for cooperation in combating the loss of such priceless cultural heritage. Our cooperation not only protects valuable Italian artifacts but also eliminates key sources of funding for terrorists and transnational organized crime engaged in the illicit trade of cultural property,” said Assistant Secretary Marie Royce.

“When individuals attempt to steal and profit from the rich cultural history of Italy, they not only steal from the rightful owners, but they steal from the future and our understanding of the past,” said Patrick J. Lechleitner, Assistant Director of International Operations for HSI. “The renewal of this memorandum of understanding between the United States and Italy and the repatriation of these pieces shows the continued commitment between our nations to prevent and investigate cultural property crimes. HSI stands besides our law enforcement partners both in Italy and here in the United States to investigate, seek to recover and return these unique pieces of history.”

The manuscripts, originating in Benevento, Italy and dating from 821 A.D. and 823 A.D. respectively, record the sale of lands, including vineyards and orchards, to a man named Bonepertus and his sons. The manuscripts were gifted to the University of Pennsylvania in 2010 but were found to be stolen from the Biblioteca statale del Monumento Nazionale Badia di Cava in Cava de’ Tirreni, Italy. Upon learning the origin of the pieces, the University of Pennsylvania voluntarily surrendered the manuscripts to agents with the HSI Philadelphia field office in 2019.

The Roman coin, a “Contorniato di Traiano,” was a reward given to soldiers or civilians during the rule of the Roman emperor Trajan (98-117 A.D.). The coin was stolen from the Oliveriano Museum in Pesaro in 1978. In April 2016, an auction house contacted the museum to report that a coin, believed to be the stolen object, had recently been consigned by the executor of an estate. The auction house surrendered the coin to HSI Philadelphia in 2018.

The repatriation Thursday highlights the unique relationship between HSI and Italy, particularly with the in investigating and repatriating cultural property. To date, HSI’s attaché office in Rome has conducted more than 60 investigations in coordination with Comando Carabinieri Tutela Patrimonio Culturale.

The recovery of these pieces is the result of extensive investigations by HSI Wilmington (Delaware) as well as significant assistance by the Office of the United States Attorney for the Eastern District of Pennsylvania.

The Federal Bureau of Investigation also attended the ceremony and repatriated a bust dating back to the 1st century B.C., stolen from Villa Torlonia in the 1980s.

The Cultural Property, Art and Antiquities Program is unique to HSI’s portfolio. Returning a nation’s looted cultural heritage or stolen artwork, promotes goodwill with foreign governments and citizens, while significantly protecting the world’s cultural heritage and knowledge of past civilizations.

HSI’s International Operations, through its 80 attaché offices in 53 countries, works closely with foreign governments to conduct joint investigations, and is committed to pursuing a strategy to combat transnational organized crime related to the illicit trafficking of cultural artifacts by targeting high-priority organizations and strengthening international law enforcement partnerships.

ICE has recovered and returned over 12,500 artifacts to more than 30 countries since 2007, including paintings from France, Germany, Poland and Austria; cultural artifacts from China and Cambodia; dinosaur fossils from Mongolia; and illuminated manuscript from Italy; a pair of royal Korean seals, ancient Peruvian ceramics, and very recently, an ancient gold coffin which was repatriated to Egypt.

Despite increasingly aggressive enforcement efforts to prevent the theft of cultural heritage and other antiquities, the illicit movement of such items across international borders continues to challenge global law enforcement efforts to reduce the trafficking of such property. Trafficking in antiquities is estimated to be a multi-billion-dollar transnational criminal enterprise.

Members of the public who have information about the illicit distribution of cultural property, as well as the illegal trafficking of artwork, are urged to call the toll-free tip line at 1-866-DHS-2-ICE or to complete the online tip form.