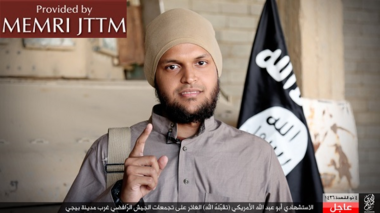 An American named Abu Abdallah Al Amriki was among four ISIS suicide bombers who targeted the Iraqi Army barricades near the city of Baiji north of Baghdad, the media office of the Islamic State (ISIS) in Iraq’s Salah Al Din province announced Wednesday, including a photo of Al Amriki.

The operation was part of a raid named after Sheikh Abu Khattab Al Shihawi.

US officials were aware that Al Amriki, who they identified as Moner Mohammad Abusalha, had been fighting with ISIS since earlier this year. He appeared in an ISIS video, “Turning Point,” which the jihadi organization released on July 16 featuring jihadists from around the world who’d traveled to Syria to engage in jihad.

The Middle East Media Research Institute (MEMRI), which monitors jihadi social media, said, “The statement, released on the ISIS-affiliated forum Shumoukh Al Islam, noted that Al Amriki had detonated his explosive-packed four-wheel-drive vehicle against the barricade set up by the ‘rejectionist’ army near the Hyundai area, southwest of the city.”

According to the statement, another attacker, Abu Muawiyya Al Iraqi, had targeted the same barricade with a booby-trapped Hummer.