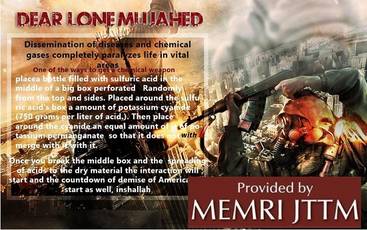 On January 2 and 3, 2017, the Telegram channel of Lone Mujahid, “which frequently calls for lone wolf attacks in the West and periodically provides various methods for launching such attacks, posted several threats to the US along with instructions on building pressure cooker bombs and manufacturing chemical weapons,” the Middle East Media Research Institute (MEMRI) Jihad and Terrorism Threat Monitor (JTTM) revealed today.

On January 3, the channel published a poster that included cursory instructions on manufacturing a chemical weapon, noting the dissemination of "disease[-inducing] and chemical gases completely paralyzes life in vital [enemy] areas."

The post stated, "One of the ways to get a chemical weapon [is to] place a bottle filled with sulfuric acid in the middle of a box [that is] perforated randomly from the top and sides. Placed around the sulfuric acid’s box [is] a[n] amount of potassium cyanide … Once you break the middle box and the spreading of acids to the dry material [occurs,] the interaction will start and the countdown of [the] demise of America will as well, inshallah."

MEMRI said, “Another post on the channel features instructions on building a bomb out of a pressure cooker that were taken from the Al Qaeda in the Arabian Peninsula (AQAP) English-language magazine Inspire. Another post also urged lone wolves to emulate ‘Underwear Bomber’ Umar Farouk Abdulmutallab.

The channel further promised its members to provide them with explanations on how lone wolves "can make use of corrosive chemicals, poisons and explosive materials."

US counterterrorism officials told Homeland Security Today on background at the time that they were taking this potential new threat "very seriously," as one said. "This shows the growing sophistication of jihadi groups to develop new methods of creating new attack capabilities."

The officials acknowledged at the time that this represents a "serious new threat."

The chemical bomb threat comes on the heels of an ISIS video showing children receiving military training and vowing to attack Infidels.

MEMRI said on December 29, 2016, the ISIS media office in Al Raqqa, Syria, “released a video showing dozens of children from different backgrounds receiving military training using rifles and grenades, executing men accused of being spies and soldiers in the Syrian army, and vowing to attack the infidels in their homelands.”

In the video, "My father Told Me," which was posted on the leading ISIS-affiliated jihadi forum Shumoukh Al Islam, “the featured children, mainly sons of foreign fighters from multiple countries including Turkey, Chechnya, Turkestan, Saudi Arabia and Kyrgyzstan, reminisced about their fathers and recalled their advice to them to become fighters, seek martyrdom and study the shari’a.”

Describing the children’s readiness status, Abu Khuzaymah Al Bakistani, one of the trainers featured in the video, said, "Today, by the grace of Allah, the cubs of the caliphate have become ready. These cubs have been raised according to the book of Allah and the Sunnah of His Prophet. Some of them have memorized the entire book of Allah by heart. We will go along with them and we will equip them with the required military equipment."

The children also delivered a collective message, each delivering a sentence or two, to say, "Our fathers were killed while defending Islam, but they have planted monotheism in our hearts, as well as the love of fighting against polytheists and [the love of] preaching to Muslims and inciting them. They have taught us to be concerned [about an issue] many men are not concerned about: The issue of the religion and support for those who are oppressed. We will be, Allah’s willing, the sword of the ummah and its shield."

Addressing "the nations of unbelief," they added: "We are not a group nor are we slogans. We are the grandchildren of the Prophet’s companions and we will remain until Judgment Day and we will invade you in your homelands, Allah’s willing. So wait and feel you necks, as defeat will be yours by the name of Muhammad’s God."

“In a scene described as ‘training to storm buildings,’" MEMRI said, “the children are seen breaking into a building, blowing off doors and shooting human-shaped targets. As they are making their way to the upper floors, the targets are replaced by actual men accused of being members of the sahawat, local Sunni militias fighting against ISIS, soldiers in the Syrian army and agents for the Jordanian government.”

The video ended with the seven children standing in front of an unidentified ISIS fighter who said the children were raised to love jihad and martyrdom. Addressing the children, he said, "You are the banner bearers after your fathers. You are neither children nor cubs. You are the lions and sons of lions. March forth with what your fathers have taught you."